Sir Elton John comes to Harvard to accept the Harvard Foundation’s Humanitarian of the Year Award with a message of acceptance himself. 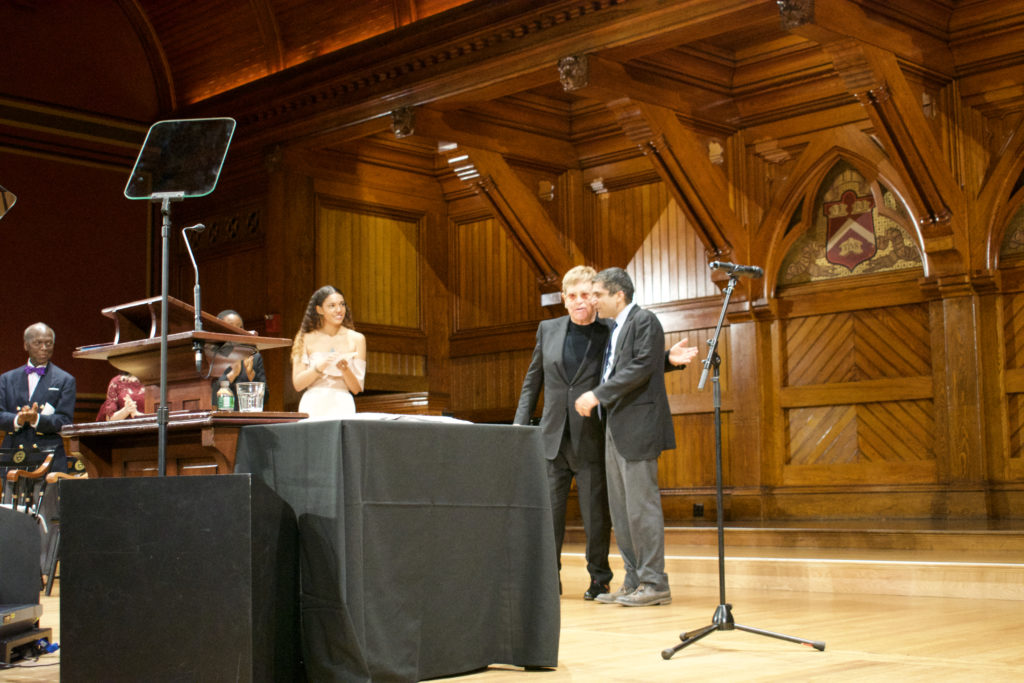 With Thanksgiving officially in the ten-day weather forecast, the Meal of the year no longer feels like a pilgrimage away. It will be a holiday spent at a dining table a decent distance from the dining tables of Annenberg Hall I have frequented over the past few months, at which recent conversations include predictions for The Game. It can be easy to forget that Annenberg’s fine neighbor is Sanders Theatre, at which a recent conversation included Sir Elton John’s accepting the Harvard Foundation’s Humanitarian of the Year award. It was not just a speech but also an exhortation to us, to not just let this be us awarding exaltation to him but to also let this be us paving exaltation for others. 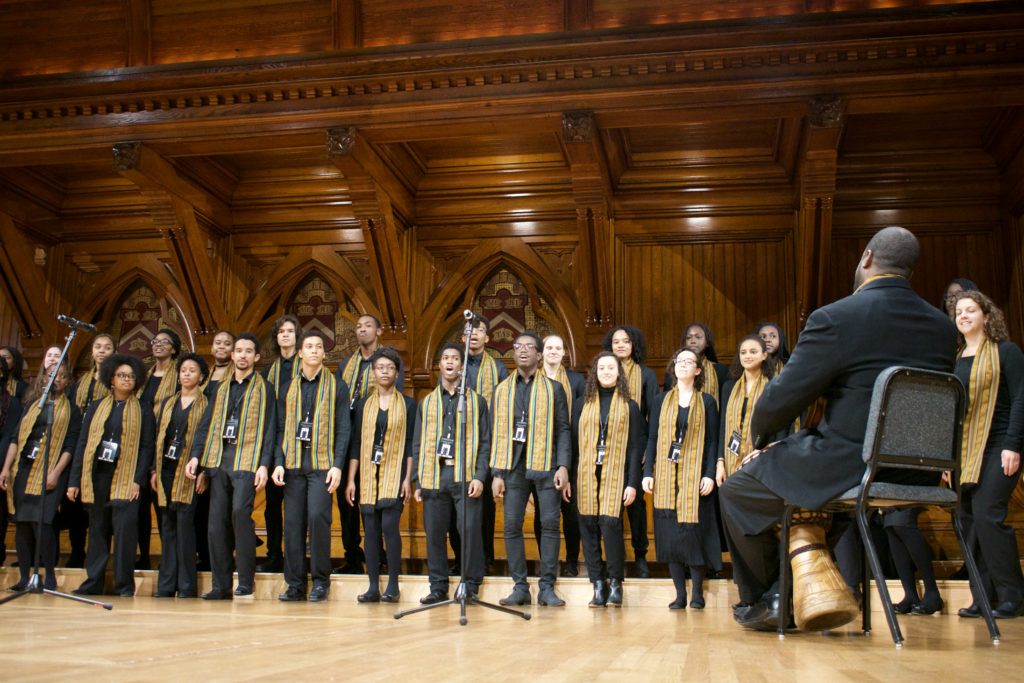 Dean Khurana prefaced Sir Elton John with words from his Border Song: “Holy Moses let us live in peace, let us strive to find a way to make all hatred cease, there’s a man over there, what’s his color I don’t care, he’s my brother… let us live in peace.” 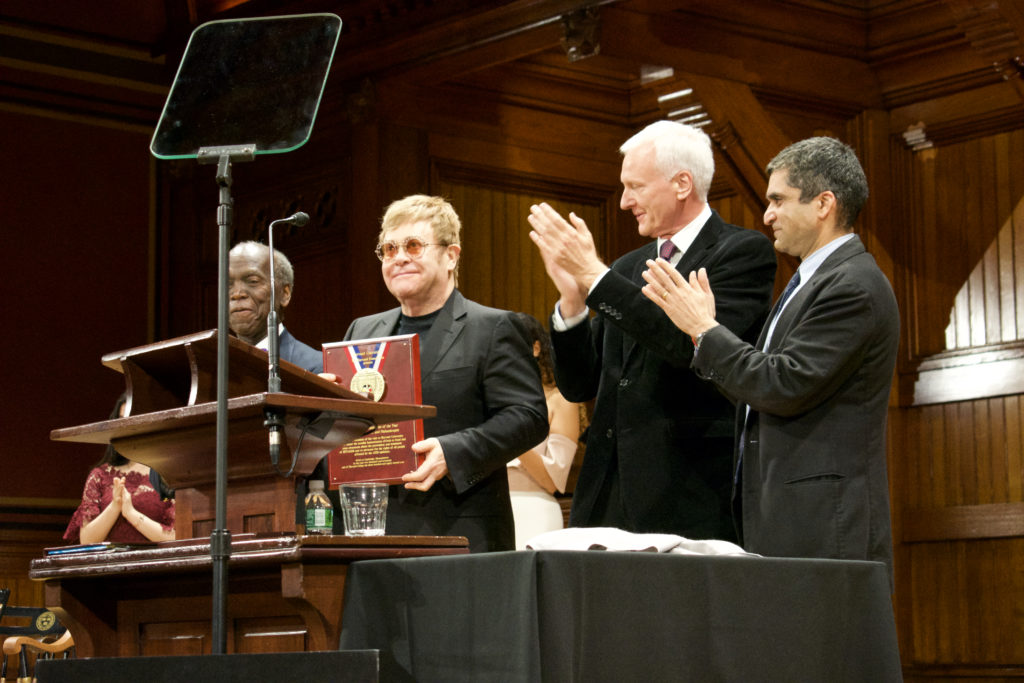 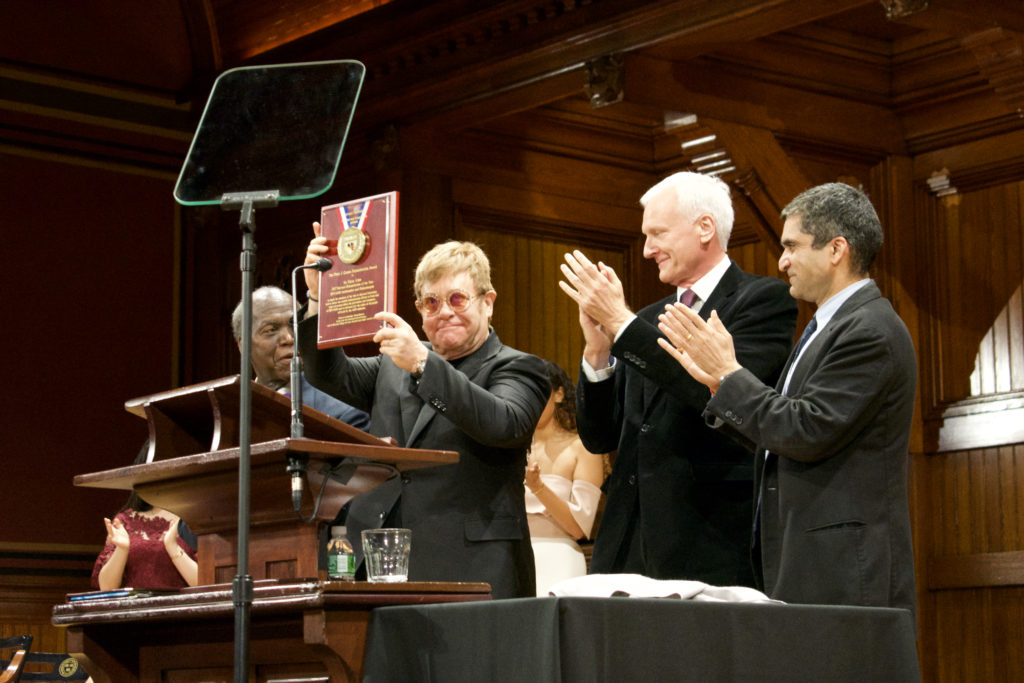 Upon his assumption of the pedestal, Sir Elton John reminisced to his beginnings with music – playing the Skaters’ Waltz by ear at the age of three. He pursued classical training and went to school at the Royal Academy of Music for five years. Even when met with the disharmony of his parent’s relationship, he noted that, “Music became my escape. It became my escape. It became my solace.” 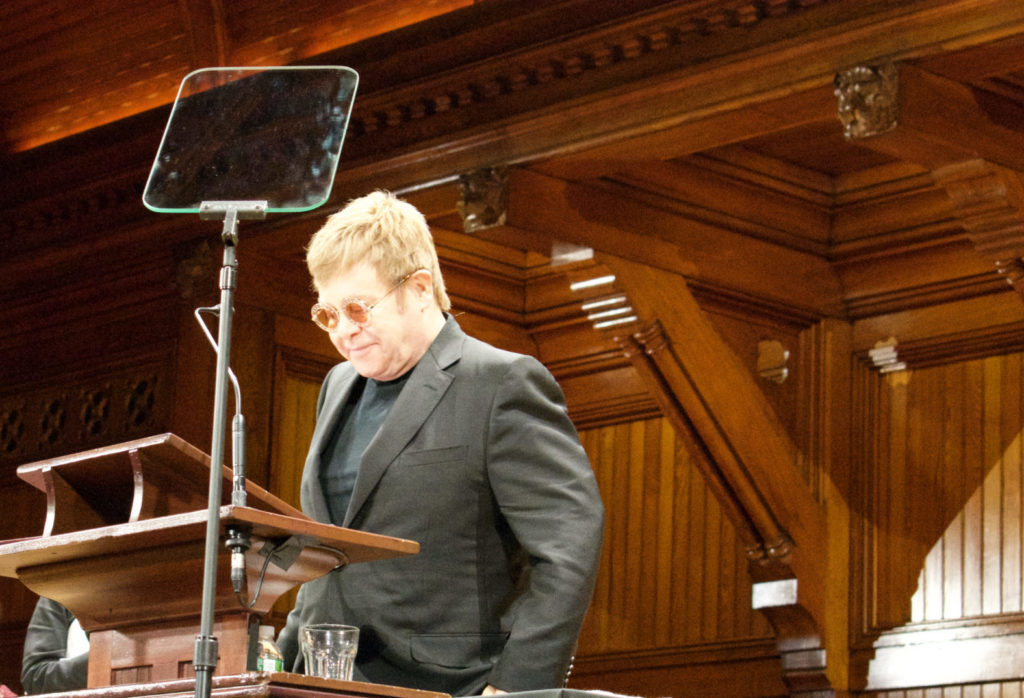 He recalled how the 1950s were a conservative time for music and, as soon as he heard the songs of Elvis Presley for the first time, he quickly realized that he was not dismayed at the fact that his hands were too small for classical music. After all, they were not meant to reperform the chords of tradition. Rather, they were meant to strike the chords of sonic change.

Though there was support, there was also dissent from his family, as he recalls, “A career in music at that time was considered outrageous and unacceptable by my father, but I stayed true to my heart.” And so, in an act of defiance that would foreshadow the social change he would later spark, he began his journey to becoming the musician we know today, all despite this.

Yet, in a celebration of the man whom Harvard believes to embody humanity the most, he confessed, “Once I hit the pinnacle, happiness became elusive and darkness crept in… along the way, I lost my own humanity.” Hindering him were his own demons of drugs, alcohol, disorders, and – perhaps the one less mentioned – self-absorption. Such a complex obsession with self was the most dangerous of them all, and the only satisfactory defense for battling this was a complete departure in character: altruism, as discovered in a doctor’s office in New York. 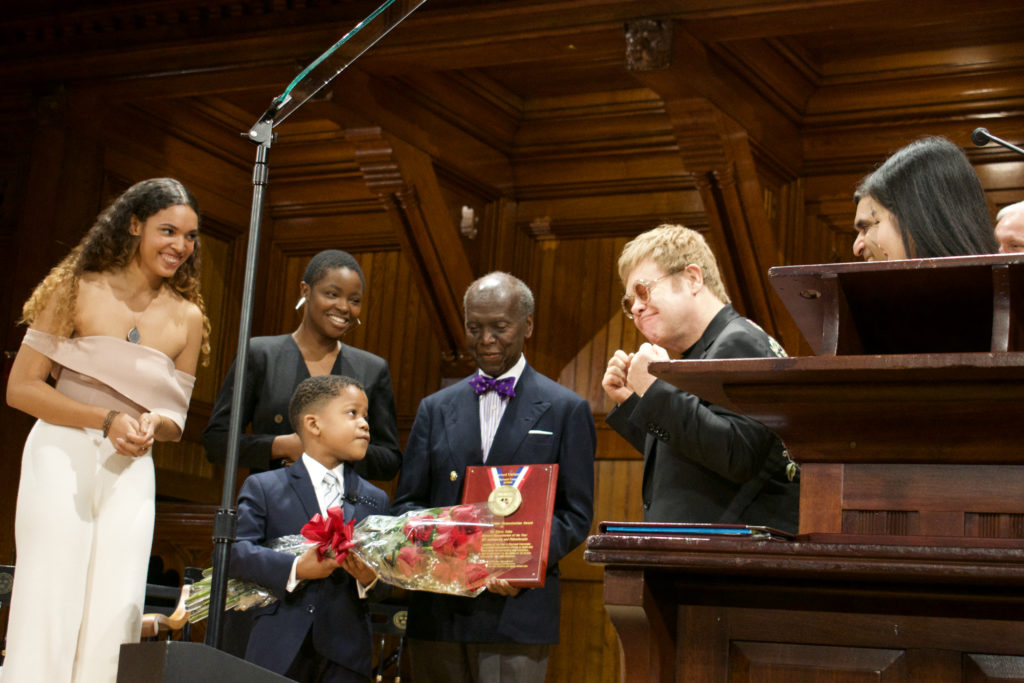 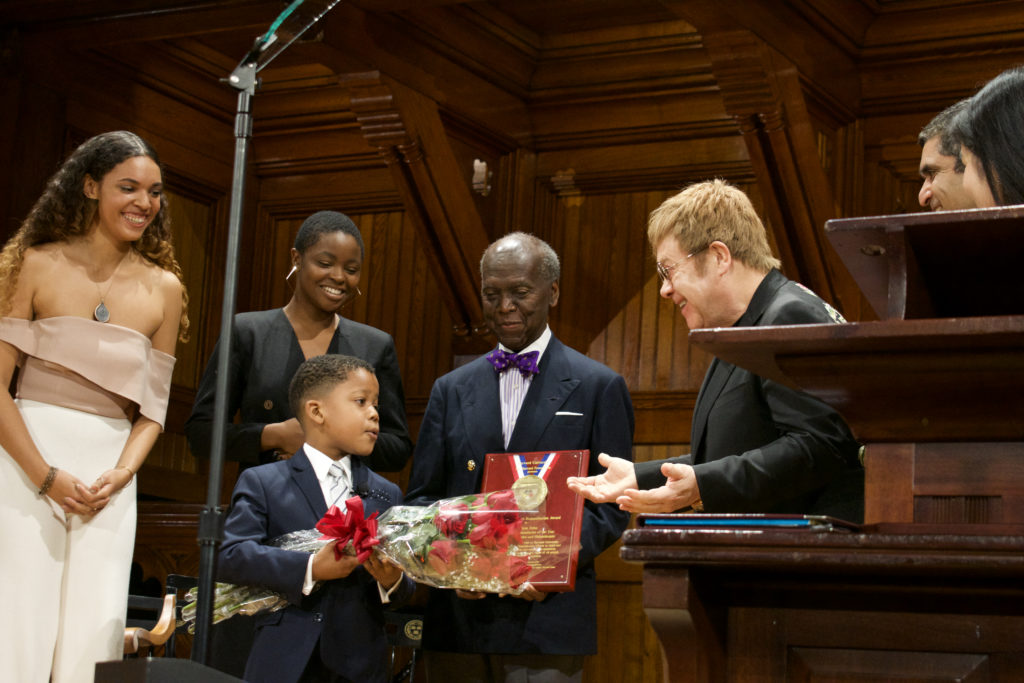 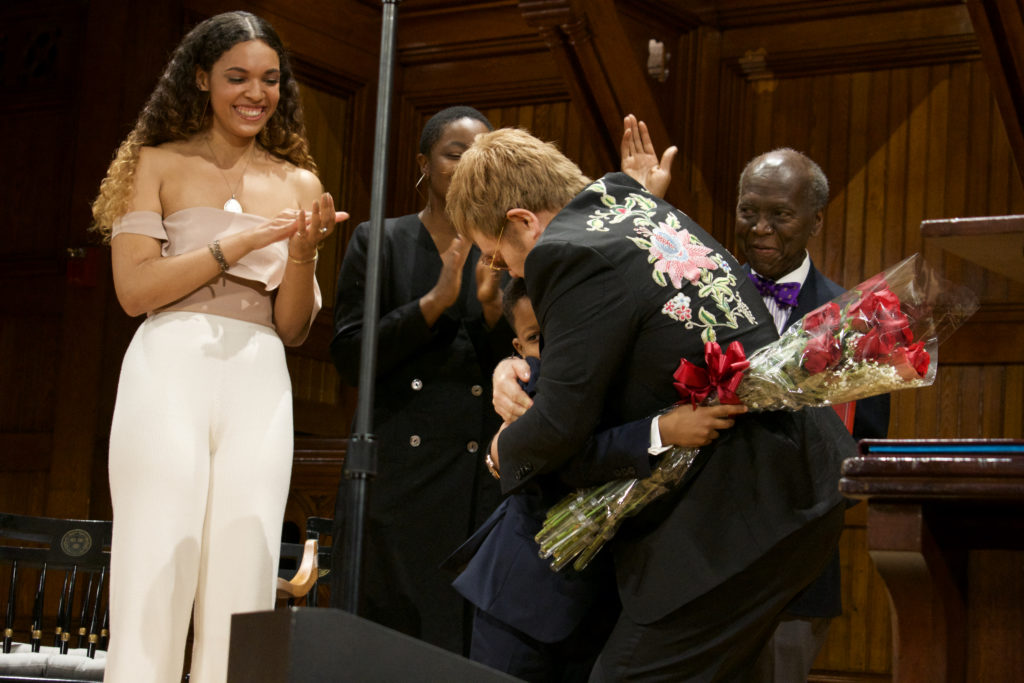 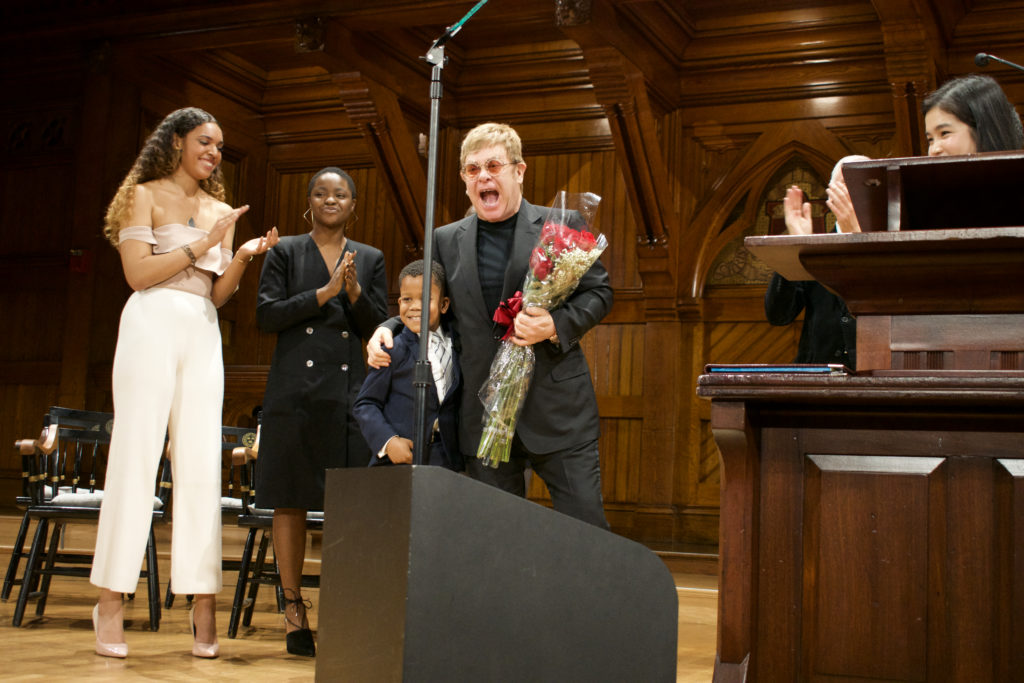 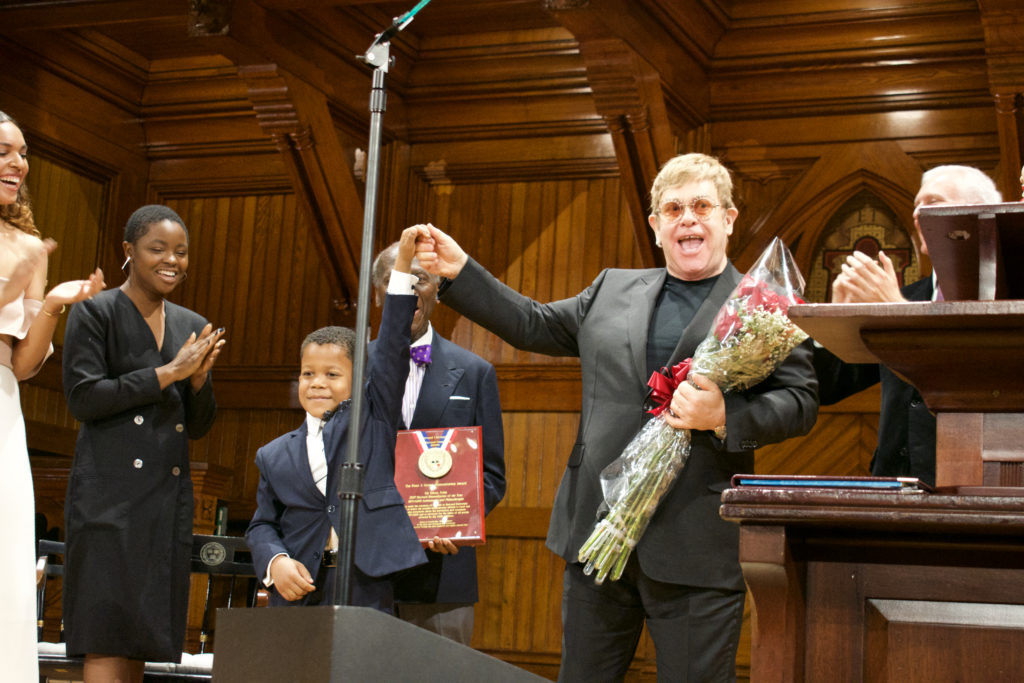 It was here where he read in a magazine about the challenges of the White family, whose house knew the pain of bullets all too well. Ryan White had been a sufferer of AIDS but a spark for a movement; although his windows were shattered by bullets, his pain opened windows for other sufferers around the globe. Elton would go on to found the Elton John AIDS Foundation in 1992. He has since generated $385 million for the cause. It was his redemption for failing to march for the AIDS movement when he was deterred by alcohol, the saving grace to his shame felt when he became sober. This he lamented, and then he pleaded, “We live here on this Earth for God knows how long – everyone has their own allotted time – I’m saying to you, don’t waste it.”

Sir Elton John was followed by student speakers of Harvard College, one of which being Skylar Bree-Takyi ’20. She recounted a memory from when she was nine years old, accompanying her mother in front of the television set. While her mother was watching a documentary on Princess Diana, Bree-Takyi instead watched her mother’s eyes pool with tears. On the television screen was “a spectacled face sitting down at a grand piano and beginning to pour out words and music that [she] knew, even then, could only be described as heartsong.” 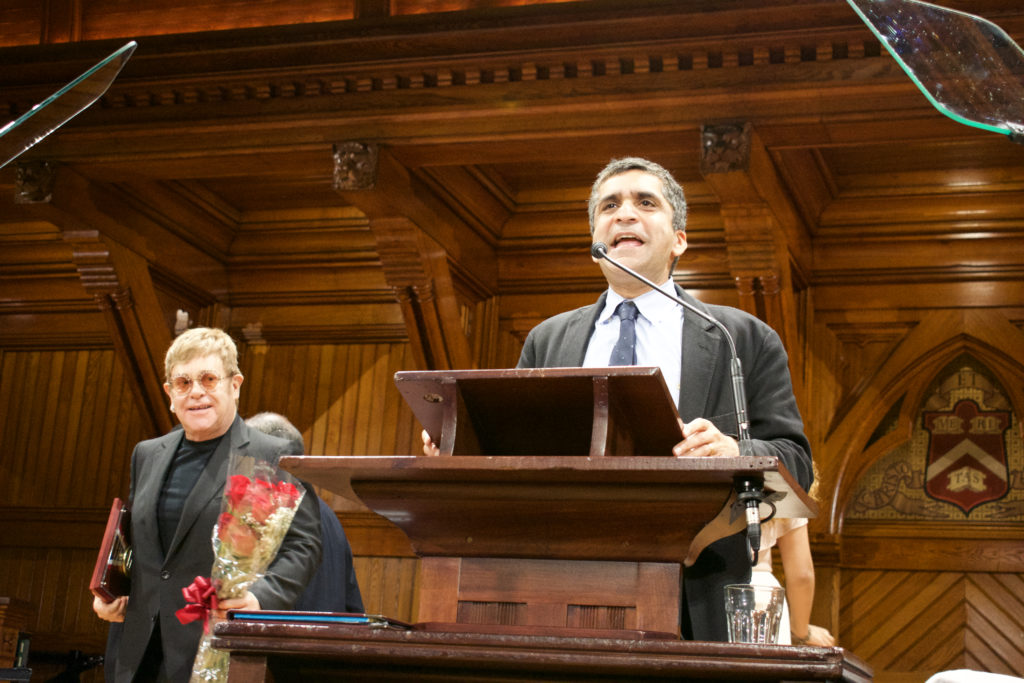 And so, even though Sir Elton John indubitably has made strides with his Foundation, we cannot forget the humanity that is his music, the foundation of it all. It unites all across religions and regions and races and ranks.

It ceases our blindness.

And donned in his Signature Spectacles, seated on the stage, I cannot help but think that Sir Elton John’s commitment to making vision correction a style is uncannily aligned with him correcting our visions, as we ourselves visualize and correct humanity. 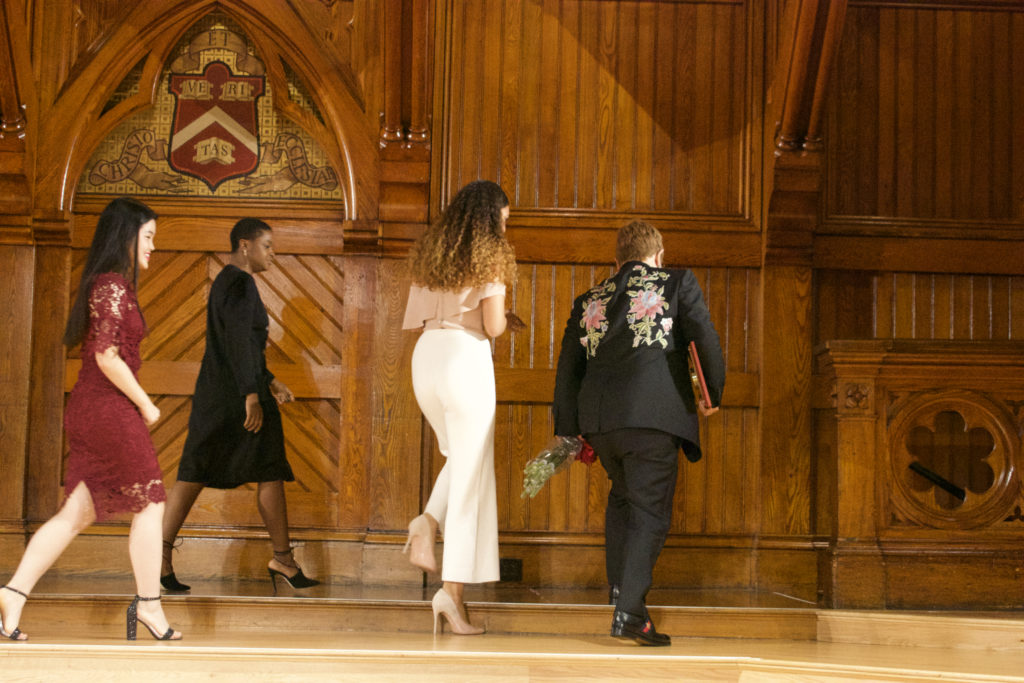 Marissa Garcia (marissagarcia@college.harvard.edu) hopes to come back for Spring Term donning a new pair of spectacles.