What comes to mind when you think of Sex Ed? Does a Mean Girls quote ring in your ears? Do you picture some teacher rolling a condom onto an innocent banana?

Regardless of what you’re imagining, I’d bet that your Sex Ed class sang the benefits of abstinence, and most certainly did not tell you how to have safe, non-hetero sex.

This is problematic, of course, if you were one of the thousands of teenagers that identified on the BGLTQ spectrum and didn’t know that gay sex wasn’t inherently safe just because they omitted to tell you about it in Sex Ed. There’s a widespread myth in the BGLTQ community that homosexual sex is safe because there’s no risk of pregnancy. As SHEATH member, Harry Hager ’21, succinctly put it: “Just because pregnancy isn’t a risk, doesn’t mean you shouldn’t be prepared.”

Every member of the BGLTQ community needs to practice safe sex, and the students behind Sex Week at Harvard were kind enough to tell us why during their “Dental Damn, Why Does It Hurt When I Pee? STIs in the BGLTQ Community” event on Tuesday, November 7.

Walking in, the first thing I noticed about the workshop was that there were dental dams next to the table where they had Double Stuf Oreos, and I immediately gave them props. The classroom in Boylston filled up quickly after my arrival, but not so quickly that I didn’t get a chance to take in the impressive array of condoms, coupons, lube, and sex toys arranged at the front of the room. It was a bit awkward sitting there waiting for the presentation to begin, but I’m willing to cede that most of the awkwardness I felt was because I was the only one to have arrived alone and without a friend to giggle nervously with. Woes of being a loner aside, the presentations that were given were incredibly informative, concise, and friendly.

The first presentation was given by a SHARC representative on the types of protection available to everyone, regardless of their gender, and regardless of what gender they might be having sex with. I found myself constantly surprised by the preventative methods I was being taught – the slide informing us that brushing your teeth after oral sex increases the chance of STI transmission blew my mind. The SHARC member was thorough and matter-of-fact in her delivery. Each slide gave us the ins-and-outs of how condoms, dental dams, and lube prevented STIs by reducing skin-to-skin contact and the chances of cuts caused by friction – two ways in which STIs are spread. We were encouraged to take as many free supplies as we wanted from the table in front and it was emphasized that if we ever need someone to talk to about safe sex, SHARC is there for everyone.

The next presentation was given by two doctors from HUHS that are members of their BGLTQ Care Staff. They informed us of different medications and vaccines we should consider looking into that could help with the prevention of Hepatitis, HPV, and the like. There were a lot, and they told us to strongly consider talking to our doctors about our options for staying safe.

They also talked about how setting up an STI screening is as easy as logging into the Student Health Portal, and made sure to stress that most STI screenings are covered by the Student Health Fee. As someone coming from a high school where there wasn’t even a Sex Ed class, I was amazed by how many resources there are on campus to get free information and protection. 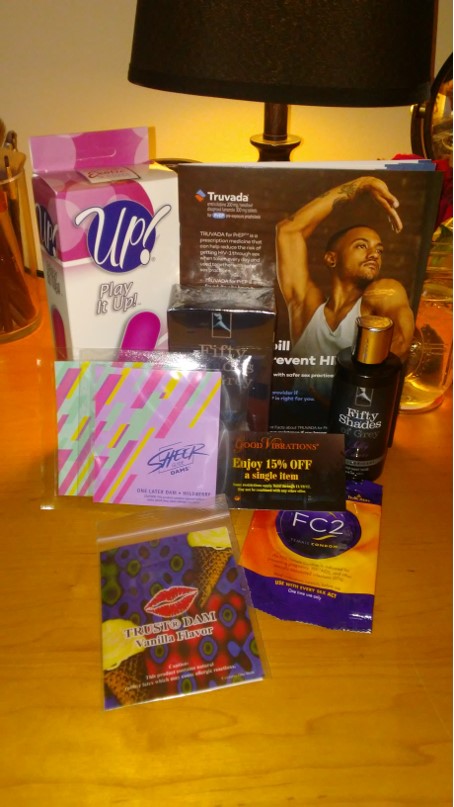 Awash in the knowledge that had just been imparted to me, I made sure to grab several handfuls of condoms, dental dams, and informative pamphlets.

This workshop was the result of a collaboration between SHEATH, HUHS, and the Office of BGLTQ Student Life. To find out more about Sex Week and ways in which STIs can be prevented, check out the following websites.

Alaya Ayala (alaya_ayala@college.harvard.edu) enjoys free stuff and learning more about how to be a healthy member of the BGLTQ community.