Next Customer Please, a Harvard-Radcliffe Dramatic Club play, premieres and invites you to be a member of its first audience.

There is something inexplicable about witnessing a show that is on the precipice of premiere. There is no plot line with which we are familiar… no preconceived notions or expectations about when we think we should laugh or when we think we should cry. There is no vague impression of how we think the story goes, so much so that we begin structuring and pacing everything we see… as what may be the case with the quintessential showing of a Shakespearean play. Instead, it is all novel, and therein, a different kind of appreciation felt by the audience. It stems from the acknowledgement that the director, producers, and actors are not involving themselves with something proven to be Right. They are dedicating hours upon hours in order to create something they find worth the sacrifice of their time. And therefore, this creation… it warrants a watch. Vulnerable the play will be, as its reception will be an unknown, but to be able to experience a play during which you, as an audience member, are able to curate a sense of agency in determining during which scenes you should laugh or you should cry… now, that is theatre.

And so, to say the least, there was something explicable about my witnessing the dress rehearsal for a show that has yet to premiere. It had me watching the scenes in a new way – imagining where the audience would laugh. It often turned into me filling those silences myself.

Next Customer Please is a play that makes us laugh not out of the originality of its content but rather out of its showcasing of commonplace annoyances that we never seem to voice. Undeniably, there is a part of us all that kneels in to listen to a deliciously frustrating story, especially when it happens in the realm of retail. This is perfect considering that the play’s plot centers on clothing store employees subject to hilariously humiliating predicaments.

I had the chance to speak to the director, Carla Troconis ’19, about her experiences with directing this play. The script was first introduced to her approximately a year ago when she was directing a different show. It was this show that her friend, Boyd Hampton ’16, watched… and loved. It led to him asking Troconis if she would be interested in directing Next Customer Please, which he had just written. Wanting to dedicate her spring semester to acting, she opted to push back the project, promising that, if he was still interested in pursuing the project at a later time, she would embrace the opportunity. And this is exactly what happened. 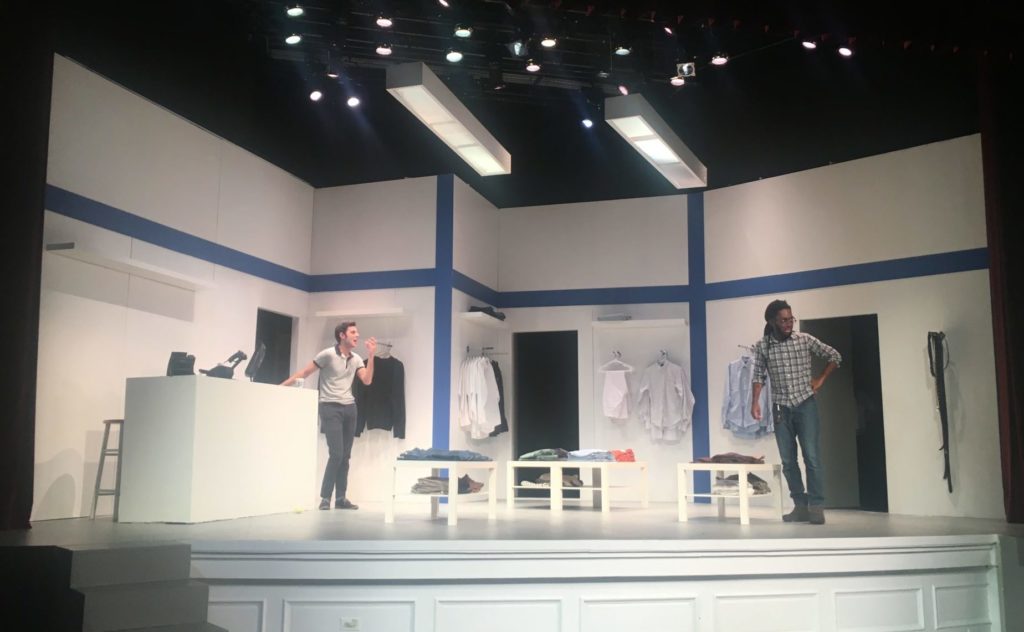 The set of Next Customer Please in Agassiz Theatre. Marissa Garcia ’21.

It is no doubt that a large part of the allure of Next Customer Please is its deviance. Troconis went on to mention how this play – a comedy – marks a departure from the recent conventions of the Harvard-Radcliffe Dramatic Club. “We have had a lot of seasons of very, very dark shows – which are very important – but it’s nice to have some laughter, and because of that it has been a lovely rehearsal process.”

And its deviance expands past that as well. Next Customer Please prioritizes diversity. Although Troconis is the director of this play in particular, she confessed her personal struggles as an actress in comedic shows: “As a woman of color, who… has always been pushed out of comedy or felt like she didn’t really fit in, it was really important to me to cast and include people of color and women. So… there are a lot of women in our cast and also around a 50/50 POC, non-POC balance.” What she said rings true. Not only is there a multitude of cultures being represented, but there also is a balance between gender representation.

Ultimately, there is no better way to engage ourselves with the artistic narrative of our generation than to be a pioneer audience member of a premiere. Next Customer Please could be that first step for us.

Marissa Garcia (marissagarcia@college.harvard.edu) will most certainly be one of the next customers at the HRDC box office, please.