A review of Happy Death Day. 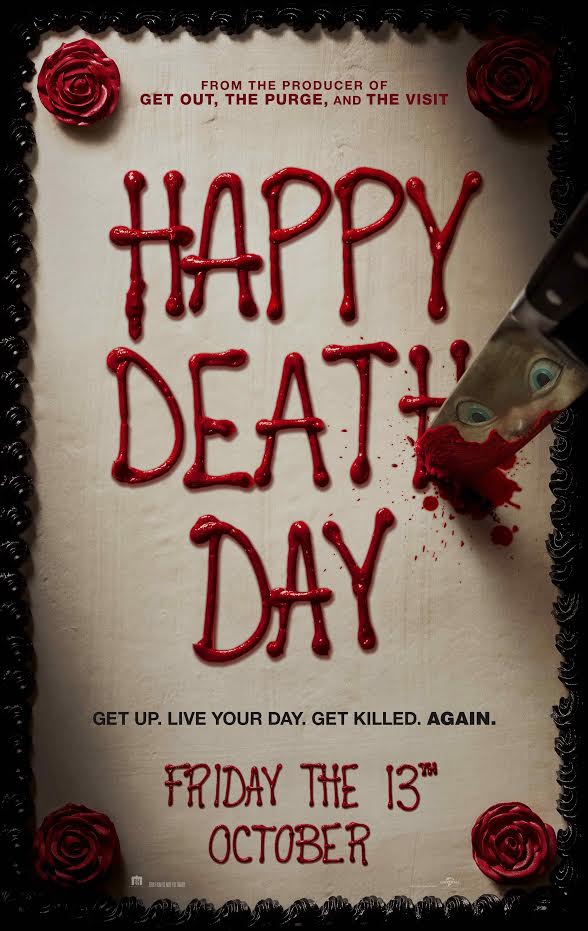 The Brattle Theater and the Harvard College Film Festival generously held a free showing of Universal’s soon to be released movie Happy Death Day for college students looking to enjoy a new horror movie in a classic Cambridge venue. The movie is out in theaters on Friday, the 13th of October, and centers on the repeated bad luck of the main character.

The premise of Christopher Landon’s Happy Death Day is that Tree, a vapid sorority girl, wakes up on her birthday only to live her murder over and over again until she divines her killer and escapes death. She enlists the help of Carter, a sweet, plaid-clad boy-next-door, who took her in the night before when she was drunk. We are conditioned to dislike her; she throws away the birthday cupcake her roommate Laurie makes her, humiliates a former fling, and repeatedly rebuffs Carter’s friendliness. And the movie is peppered with uninspired death scenes; she’s stabbed in a tunnel, she’s stabbed on a bed, she’s in a car and it’s lit on fire, etc. each time by a killer wearing a cliched, grotesquely bulbous baby mask. She is killed repeatedly until she deduces, from a news reel that has been playing each day, that her murderer is an escaped serial killer who had been recuperating in a local hospital.

The comedy, not the horror, buoys the film; it’s specific and self-aware in its cliched charades of sisterhood and athleisure fanatics whose perky curiosity about Tree’s latest flings smacks of judgment. The peripheral Kappa girls are indistinguishably but comically unpleasant; they spit on their Uber drivers, religiously avoid breakfast, and are deeply mistrustful of anyone who owns Crocs. The humor is mined from pop-culture. It’s not inventive, but is comfortingly familiar; the audience seemed to laugh the hardest at all the “stupid bitch”’s and the caricatured cat-fight between Tree and Laurie. But it’s the kind of humor you will easily find more colorfully embodied in the Plastics from Mean Girls. The movie steers clear of more clichés with the self-conscious twist-endings; we are never meant to believe that the day Tree apologizes to her father for pushing him away, as a consummation of all her suddenly redemptive self-reflection and kind acts, is the day she will live. When she does nab the serial killer, she dies that night anyway because she eats Laurie’s poisoned cupcake, learning that the serial killer was only Laurie’s scapegoat all along.

The backstory about Tree’s mother’s death on her birthday should add depth to her character, in revealing the wounded resentment behind Tree’s brash irritability, but she doesn’t falter enough (even privately) to betray any believably complex vulnerabilities. Her unraveling in front of Caleb is too simple and tepid to be genuine. Even while she’s dutifully avoided any meaningful emotional connections since her mother’s death, she holds people in thrall with a selfish charisma that could have been more realistically complex (think Regina George’s humanizing insecurities).

When Tree realizes that none of her shenanigans will matter the next day, she struts the Quad naked—a scene that doesn’t land with much dramatic effect, as she was already emphatically doing whatever she wanted with her supercilious disregard for other people’s feelings. Aside from the alienating, flat characters, the film’s horror couldn’t sustain me, its most skittish audience member. But I stop short of demanding too much; the movie was not supposed to be taken seriously. If there is any deeper meaning to be found, it might be in the juxtaposition between death scenarios that would normally be appallingly gory but here are tired variations in a series, and characters so ordinary they could be dispensable. I figure that if we are to be desensitized by these tableaus of death, we should know that we are all dispensable and live more purposefully. But I digress; puzzling over this is unnecessary. The movie was funny, but bad.

Claire Park (claire_park@college.harvard.edu) fancies herself a generous and articulate movie-reviewer, but sometimes she has to say that a movie is bad.