I suppose the old adage – the one any reviewer would wish to convey – would be something along the lines of, “It goes without saying that this musical left me breathless!” I consider it my humble duty to completely reject that notion and announce that, “It goes WITH saying that this musical left me breathless!” For beginning the valiant attempt of saying this musical’s title is an incredibly long-winded task (I dare you to try it… say all seven words in a singular breath!) and will undoubtedly leave you breathless.

Though long-winded, The 25th Annual Putnam County Spelling Bee is also quick-witted. The hilarity that ensues from the absurd longevity of the title is an indicator of the other quirks of jest that are to come. Six adolescent spellers are seated on the stage, comically crushed by the great weight of what it is that they are about to do: that is, compete for a spot in the National Spelling Bee. Through dynamic musical numbers with titles as alluring as “Pandemonium,” as relatable as “I’m Not That Smart,” as satirical as “Why We Like Spelling,” we become oddly affectionate toward these six spellers, for these numbers make their oddities and eccentricities feel all the more personally endearing. 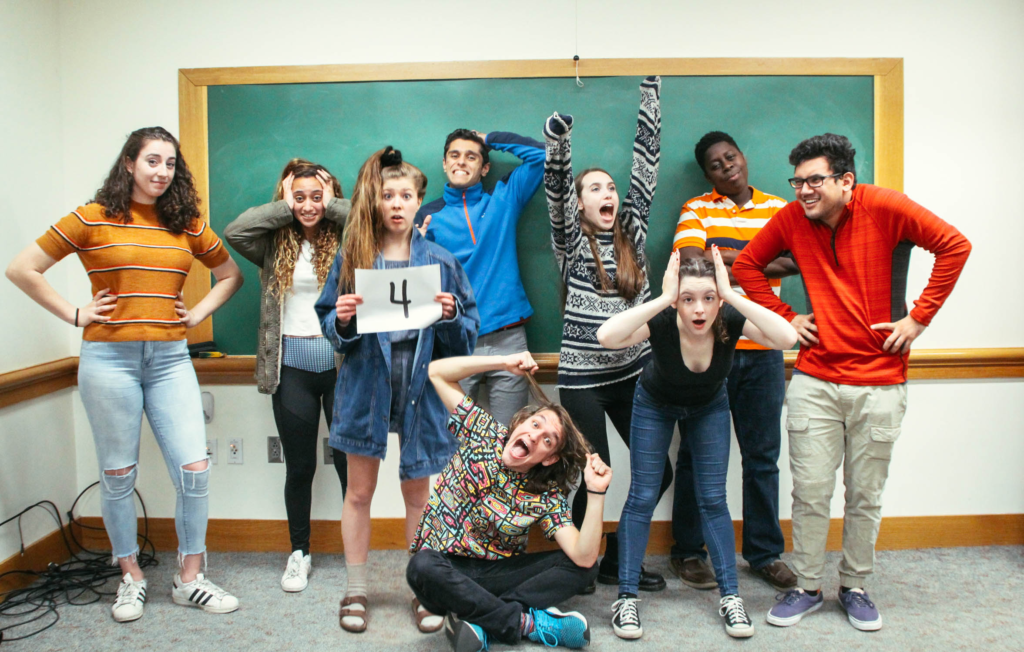 One such moment was felt by one of the musical’s leading actresses, Sophie Bauder ’21, who plays the role of Olive Ostrovsky. It was in her sophomore year of high school when she experienced her first listen of “The I Love You Song.” This first listen also marked the first time she ever had cried so immediately in reaction to a song. And just like that, the impactful listening of this one song led to her listening to the whole cast recording, and her initial captivation with a character turned into an adoration for the entire musical. And so, Olive became Bauder’s dream role for a consecutive two and a half years. Similarly to how Olive is a character yearning to break through her qualms about her parents, Olive also is a role that allowed Bauder to break through her qualms about her own theatre experiences.

She recalls, “I also went through a long period in high school where I kept getting cast as a very particular kind of character. It just kept happening and I kept getting the same kind of role –  and I was just getting dissatisfied with the experiences I was having. So, I knew – coming to college – I really, really wanted to try something a little different.”

Olive was exactly that for her.

Though she had this longing to challenge herself by playing a new type of character, Bauder came into Harvard with close to no expectations about getting such a role, a fear common to many freshman, who frequently find themselves in a bit of a quarry when competing for roles against upperclassmen. Satiated with her enrollment in a freshman seminar about acting, though still voracious for an opportunity to perform, she auditioned for several shows, which culminated in her having to do six callbacks within just a day – the first of which was Spelling Bee. The callback song was, but of course, the one that began it all, her trademark – “The I Love You Song.” It is her “curveball,” as she so describes, for it is a sudden shift in the otherwise light-hearted mood of the musical.

Director Gregory Lipson ’20 shares a similar awe for “The I Love You Song,” confessing that it is his favorite moment of the musical and that, “The very first time we ran it, I was almost in tears.”

This is Lipson’s directing debut here at Harvard, though his penchant for theatre began in middle school when his mandatory theatre class (luckily) forced him to write and direct a ten-minute play. Lipson recollects perhaps his most profound moment of middle school intellectual frustration: “I remember sitting in science class and staring out the window and being, “I don’t care about the tectonic plates. I just – this moment in my show – they’re not doing it right! What are they doing wrong?!”

Bauder and Lipson do not just have a favorite musical number in common – Lipson, with his strong theatre background, still struggled with getting roles his freshman year. Come January and the beginning of second semester, Madeleine Snow ’20, the show’s producer approached him with this idea of having an all-freshman cast in the fall, an idea born out of the similar frustrations she faced while auditioning for several shows and only being selected for an ensemble. Lipson emphasizes that, “Our show is really for the actors… in their freshman year, when they are the least likely to get a character that they can really dig into and not just be in the ensemble.” The all-freshman cast was very much a deliberate decision. Spelling Bee also lacks an ensemble, opening space for these actors’ characters to truly be developed.

Not only is the all-freshman cast a revolutionary feature – but Spelling Bee will also be the first time in over a decade that a theatrical production take place in Lowell Lecture Hall (17 Kirkland Street, Cambridge, MA). The play will be for one night only, on Friday, October 27th at 8:30 PM. Tickets are free for all Harvard undergraduates and $5 for non-HUID holders (tickets for which are at boxoffice.harvard.edu or at the Harvard Box Office (10 Holyoke Street, Cambridge, MA). The musical is in perfect timing for Freshman Parent Weekend.

In “The I Love You Song,” Olive is asked to spell “chimerical,” defined for her as “unreal, imaginary, visionary.” This moment painfully reflects her desire to refashion her relationship with her parents from strained to supportive. And although this word is meant to denote her unfulfilled longig, it also carries with it a dash of optimism, as when Olive becomes autonomous and chooses to redefine the word herself. The freshman actors have done something similar in a sense – taking autonomy in the acting scene at Harvard and choosing to spell themselves – and, to me, that is the sweetest kind of chimerical.

Marissa Garcia (marissagarcia@college.harvard.edu) is considering writing her own I Love You Song, dedicated to The 25th Annual Putnam County Spelling Bee.