Thoughts on truth, discourse, and the Secretary of Education’s Harvard visit.

It comes as little secret that Secretary Betsy DeVos was coldly received at Harvard this past week, and that a sizable portion of Harvard’s population has dismissed Secretary DeVos as a “white supremacist.” But is this a fair assessment? Does she really go around making coats from the pelts of her victims, or is there more to the story?

The benefit of having had Secretary DeVos here, aside from learning from a prominent figure in education and government, is that those with a preconceived notion of her had an opportunity to hear from her first-hand as to where she stands. Hopefully, this article can shed some light on that, and more.

Secretary DeVos framed her discussion with a quote from JFK, in which he said, “Every time that we try to lift a problem from our own shoulders, and shift that problem to the hands of the government, to the same extent we are sacrificing the liberties of our people.” And it became clear that this was an accurate way to frame how she viewed the situation, as she continually stressed parental rights in deciding which schools are best for their children, such that they might thrive in the environments chosen by parents.  To elaborate on this, she utilized the universal adage of “one man’s food is another man’s poison.” She then decried unionists who, instead of focusing on the student, focus on the system; she dismissed lotteries; and she emphatically proclaimed school choice as her badge of honor in supporting individual students. 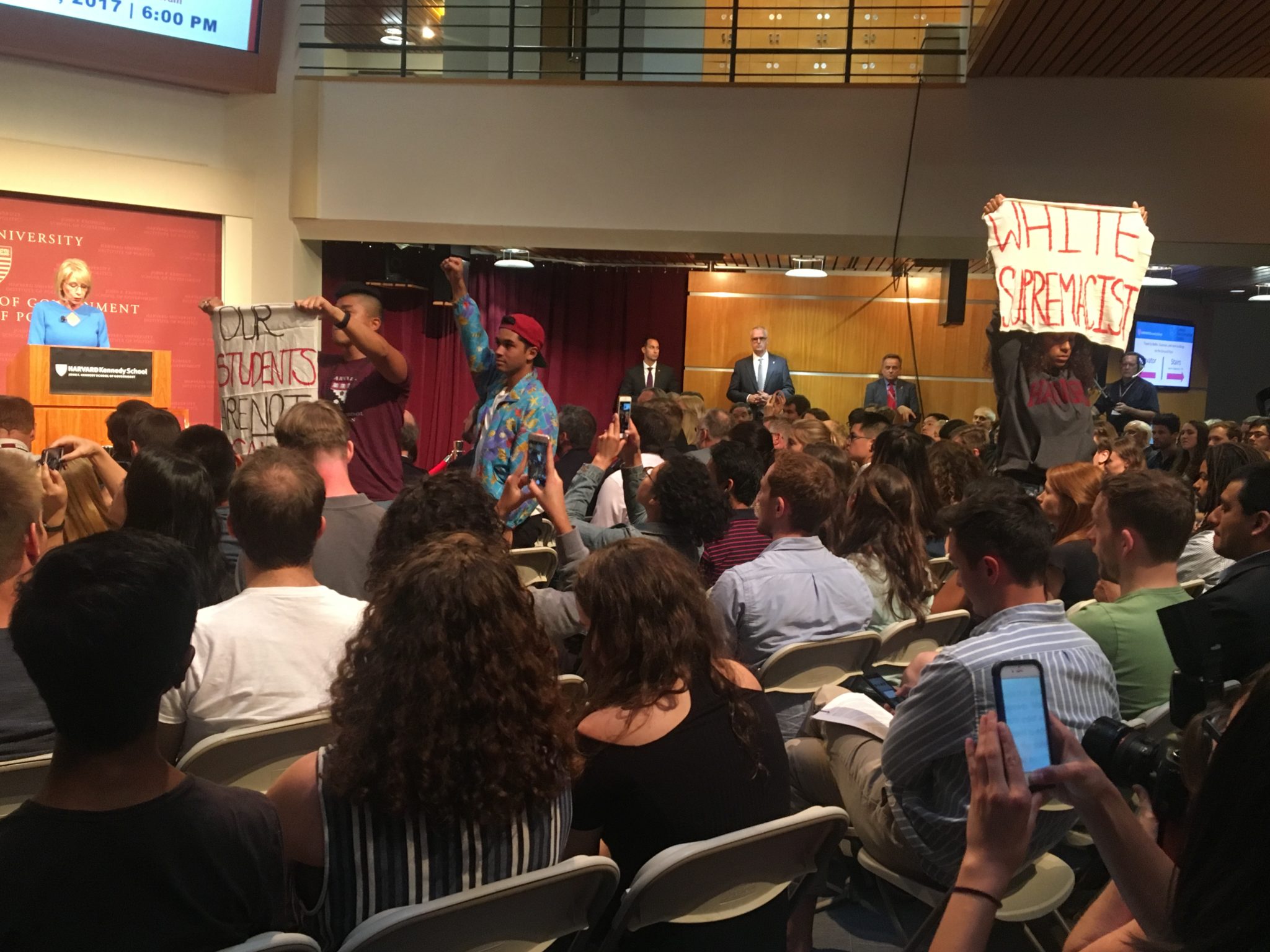 The audience in attendance at the JFK Jr. Forum. Photo by Malcolm Reid ’21.

The controversy lies in the belief that she despises normal public schools, and that she supposedly has a vendetta against minorities. The second appears to be libel that has proliferated, and I’m uncertain of whether it is founded in anything based on her policy positions. Surely no evidence for it was brought forth by the protestors. The first, I think, is a legitimate concern, and steps should be taken to protect those schools; in her speech, DeVos pointed out that being for school choice does not mean she is then against public schools. She believes the current system fails too many students, and as such, they should have the chance of self-determination. She also made the point that we, as Harvard students, chose our private university over public ones, so it seems odd to deny school choice to others and then criticize her for promoting it. As she voiced this comparison, an angry shout of “That’s different!” rose from the crowd—but is it? I shall force no perspective on the ever-indulgent reader here, but I do encourage pausing to actively consider her point.

Now, you have to imagine that as she said all this, stray fists rose into the air, various students planted here or there stood up with indignant posters, and occasionally – on one floor or another – banners unfolded and grim-faced student activists put out their fists. And to accompany these stony expressions? Hearts that were regrettably hardened to “the other side.”  Indeed, if many had their way, not only would we have a somewhat flustered speaker being protested, but she and any who think like her would be barred from campus, and indeed from speaking at all.

Its disconcerting that on college campuses there seems to be this fetishization of the idea of a fascistic state where the government tells you exactly how to live and what to say, and at the end of the day you go home to hear about your glorious leader on a late-night talk show. And all too often someone lets it slip in that they’re fine with that, as those ‘other people’ are evil, disgusting, deplorable, ignorant, racist, and so on. And so we’ve stopped listening. In truth, our students would have taken away relatively little actual knowledge on education policy—but perhaps that’s okay.

Perhaps we should see this as an opportunity for self-reflection and re-evaluation. No one seems to think that the Right is – and forgive me for this – alright. But the purpose of higher education has always been to encourage discourse and to learn from others, so I fear we risk rendering our entire education null and void. Do we want to allow ourselves to get to a point where all who voice an opinion different can be put to death like Socrates for ‘corrupt ideas’? Mills writes in On Liberty that “the only way in which a human being can make some approach to knowing the whole of a subject, is by hearing what can be said about it by persons of every variety of opinion.” Is this not the very substance of Harvard? Veritas. It is more than what is printed on the waffles; it’s a lifestyle, and one we should all embrace. Once, the third book on our logo lay face down to represent what we cannot know. But now all three are up, and it is a poignant statement on what we think we know: everything. Nay, you know nothing Jon Snow. But if we recklessly proclaim ourselves masters of knowledge and reject other opinions, what’s to separate us from the savages, the barbarians, and Yale students? A disturbing thought. But we are hardly doomed to such a cruel state, as long as we wake ourselves up, and listen, so that we might take veritas from the pages of the marketing material and instil it into our minds, and our hearts. And I have faith in us. Don’t you?