A snapshot of the team at Harvard. 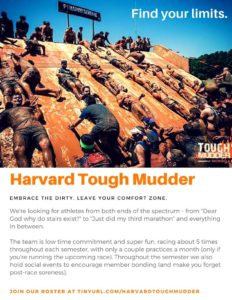 The Indy asked Alina Muñoz ’18 about her passion for Tough Mudding – a sport that has found its way onto Harvard’s campus through the enthusiasm of adventurous students! According to toughmudder.com, “Tough Mudder is 10 miles of mud and 20+ obstacles designed to drag you out of your comfort zone.” It seems the race that is this challenging physical endeavor might give even the most athletic of students pause!

Indy: How did Tough Mudder Team begin at Harvard?

AM: The Tough Mudder team was a large team a few years ago but went dormant as captains graduated. It was brought back two years ago, mostly consisting of Alpha Phi members who all wanted to run a Tough Mudder together as a bonding experience and found that there were other people who wanted to do it as well. We saw that organizations such as Battlefrog had university teams and hoped to be able to get a foundation for a team built here at Harvard.

AM: Running a Tough Mudder, and I say this emphatically, is mind over matter. Personally, I was completely out of shape before my first Tough Mudder and my only goal was to finish without needing medical assistance (for my asthma). But what got me through it was that I could just focus on the next obstacle and how to get through it most efficiently and with my team.

Being on Harvard Tough Mudder is different than other club sports (compared to me being on Harvard Cheerleading) in that it isn’t something you can practice for and isn’t something that you have to do on your own at any point. These races are done completely as a team. Or even if someone were to race alone, the culture of Tough Mudder is that everyone helps everyone no matter what. Tough Mudders aren’t even timed so finishing and helping out other people are the main objectives.

Indy: What is so fascinating or attractive about the actual and diverse physicality of tough mudding?

It’s a strange mix between being able to run the half marathon distance and being able to work out muscles that you usually don’t use. For example, to get over a wall, you need to run full speed at this large stationary object and be able to have enough finger strength to catch the edge of the wall and pull up your body weight. You don’t find this full-body workout in any other sport, even CrossFit (which I do as well) and it makes it very fun and constantly a new challenge. The course designers make new and crazier obstacles every single time and it’s always a new race to come home very sore from.

Indy Sports (sports@harvardindependent.com) is happy to explore the diversity of athletics at Harvard and the students who make them fun!