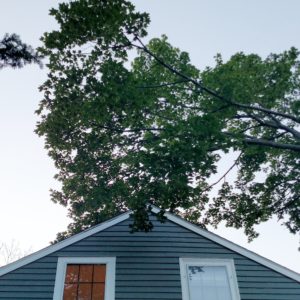 Laundry bag in tow, she trudged down the winding stairs from the small room she shared with other girls who were a lot like her. They had laundry, too. She was just being proactive about it.

She swung the door open and emerged – flipflops, ponytail, and all. Her eyes made a sweep of the area: left to right, right to left again. Those eyes, always looking, searching, found nothing of concern. Still, she felt relieved to have looked a little further, to search for something to be afraid of before she felt afraid. Always proactive, she was. Nothing was out of sight or out of mind.

Steps further, she stood, laundry bag in hand – little socks dropping all around her. They served as a reminder of where she came from. If you looked closely, you could follow the trail. She and the bag walked. It was nearly night and she began to anticipate the hordes below. People who had made the same trek with similar weight to carry and similar socks left behind. She entered the building.

Down, down, down she went. Her flipflops smacked against the cool concrete floor to the rhythm of her bag dragging. A slow, long drag like the cigarette she wished she’d smoked and the cigarette her older, wiser lungs would be thankful to have neglected. Indeed, the basement smelled like smoke. Her laundry smelled worse. She had to persevere.

Long before reaching the machines themselves, she could sense their presence. Her ears heard the tumble of dirty things becoming clean before her eyes could see such magic. Her nose smelled clean linens and dryer sheets that should be outlawed for their flammability. Bag dragging and flipflops flopping, she finally arrived; the laundry room.

It, like the rest of the basement, was questionable in smell and appearance. A lone vending machine stood with poise and without too many snack choices. Sliding past it, at last, her bag came to a halt. There she stood. Washers spinning, dryers drying, and clothes prepared to make an entrance in this cruel laundry room. She picked a machine, three down from where she stood initially, four away from the end of the line, and dumped the contents of her laundry bag into it. Detergent was next- slimy stuff that smelled like heaven. She put some of that in too.

People around her mimicked these simple actions; the trudge, the dump, the pouring of the detergent. Now, they faced a predicament: to stay and wait for the cycle to end or to leave the basement and return some minutes later. She chose to stay, they chose to go. Criss-crossed apple-sauced legs folded under her and she pulled out a book to read. Secretly, she loved doing laundry for the hum of the machines that coaxed her through each page of words. Suddenly, she was immersed in a story of love, honor, and diction. Her eyes scanned from left to right, right to left, and down the pages. Fingers flipped paper, hands held the paper up, binding held it all together to make it a book. Each deep breath made the basement’s smell something familiar, something comfortable.

She didn’t notice when he walked in – bag dragging, flipflops flopping, book in hand, hand on book. He chose a machine, dumped his clothes, poured detergent. His legs folded underneath him as his soul travelled to a time that some author created where love, honor, and diction lived. He didn’t notice as her pages turned to the cadence of his. She didn’t notice when his legs and hers unfolded to make themselves at home in the laundry room- when their legs spread out to make their own small space in the world. They noticed when the machines cried out a beep and told them the wash was complete. They noticed each place a piece of ripped up paper as a marker of where the story paused so abruptly for life to continue. She noticed him and he noticed her and there was a smile shared between them. Introductions ensued. Arms made large for carrying large quantities of wet laundry to be made dry would eventually be large again for holding. They would hold each other.

The doors of the machines opened and closed again to suck water away and return clothes crisp, dry, and wonderful. They had a laugh about the noise! It was so loud in the laundry room where machines dinged, and purred, and swished, and spun. They spoke of the literature they read (he something different than she had encountered before). This cycle was longer, people wait to dry but get wet quite quickly. This time, they sat together criss-crossed on the floor. The hum of the machines was second to the ringing of laughter and the ding of laundry once dirty, now clean; once wet, now dry. They waited and laughed until the dryers said their peace. Doors swung open once more. Clothes dragged away.