I, nine-years a cellist, met and hugged Yo-Yo Ma, Harvard Alumnus Class of ‘73, after his concert with the Silk Road Ensemble Tuesday, September 26th at the Oberon.

I was hugging the Redefiner of chamber music.

It is not certain what now is the modern purpose of the Symphony. We for some reason are allured by the culture of symphony-going and all of its black tie. Perhaps it humbles us, giving us that elusive flavour of only a few decades earlier, when having a digital wealth of varying performances of Bernstein was unimagined. After all, there has to be a reason why we still experience an intense exhilaration (and procrastination opportunity) upon the delivery of a Boston Symphony Orchestra email to our inbox.

When the symphony – especially of professional level – is so revered, it becomes shocking to encounter a genuine criticism. There is a superiority in value attached to a Symphony, so much so that an attendee could almost feel foolish, ignorant, and uneducated if bold enough to criticize it. Before the moment of slander, the critiquer would wonder if he truly is familiar enough with the music to offer valuable insight.

We often go to a Symphony expecting to hear a somewhat familiar array of classical music, such as Bach, a pinnacle of Western music. Warmth overcomes us when exposed to familiar melodies. Nostalgia strikes. Recollection resurfaces. We become even more expert in Bach but still gawk at the possibility of becoming a true concert connoisseur. After all, it just would not make sense to involve ourselves with a kind of music that has been performed and perfected for centuries. And so, the Symphony becomes a sort of machine, breeding banal repertoire to please the audience in nostalgia, failing to assume the role of educator, reinstilling Western sounds, and failing to introduce the audience to novel pieces.

While sitting first row at the Oberon, I sonically submersed myself in the melodies of the Silk Road Ensemble, featuring Yo-Yo Ma, who is amongst the ranks of the most skilled cellists today. It is true that one’s exposure to Yo-Yo Ma is usually through the Prelude to Bach Cello Suite No. 1 in G Major, the archetype of classical music. The familiarity is strong, and my nostalgia was undeniably struck when Yo-Yo Ma decided to integrate some of the Prelude’s characteristic lolling themes– the broken eighth note chords– with his performance of Sarabande, a separate movement which is from the same popular Cello Suite.

And so, here is when Yo-Yo Ma could have assumed the role of crowd satiator, giving a conventional performance of said movement that would have left us all pleased and nostalgic. Instead, he took a departure from Bach’s conventional Western instrumentation, dueting with Wu Tong, who, hauntingly playing countermelodies on his sheng, layered a fresh Eastern element to this suite. 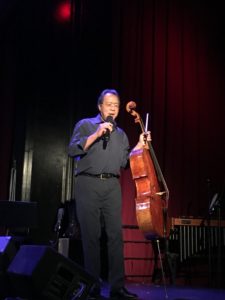 This was a theme reiterated throughout the concert. The introductory selection was Purcell’s “Chaconne: Dance for the Chinese Man and Woman” from The Fairy Queen, as inspired by Shakespeare’s A Midsummer Night’s Dream combined with an Iraqi Traditional Piece, Fog al-Nakhel. Bassist Shawn Conley led a smaller string ensemble in the performance of his own original piece, Yann’s Flight, hoping to vicariously live – through its melodies – the life of his friend, who parachutes recreationally. They concluded the concert with another combination of a Vietnamese Trad’s Lullaby and Zorn’s Briel from Book of Angels. It is worth noting that the Silk Road Ensemble contributed the the original score for the now-airing PBS documentary film, The Vietnam War, of which the soundtrack includes “Lullaby.” Instrumentation was as familiar as a violin, viola, cello, bass, percussion and as new as a sheng, suona, bawu, and guzheng. Therefore, diversity was ubiquitous, from the instrumentation to the repertoire to the performers themselves. 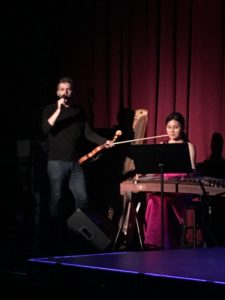 What the Silk Road Ensemble accomplished was immersion. This concert was only open to Harvard affiliates, and admission was free. This contrasts with the typical transaction of purchasing a symphony ticket in order to hear a certain piece; instead, we were willingly attending a concert for which we had no previously released program. All we knew was that we were about to experience Yo-Yo Ma and the Silk Road Ensemble, and that meant this would be foreign music to which we would have no previous exposure. And that was the point. They were the educators, ready to play for us new pieces that were not yet familiar, but hopefully one day will be… and definitely would be in a culturally united and diverse world in all respects.

The Silk Road Ensemble may be onto something. How would the dynamics of symphonic music change if programs were to stop being placed on the ticket website? What if we began to pursue music instead with a fervor for new, eclectic sounds, ditching the notion of the playlist of repeated songs?

The Silk Road Ensemble is equalizing. It is a symposium of culture, celebrating both the Eastern and the Western, and, without our previous exposure to their music, dares us to converse about it, to critique it. There is no need to feel as if we need to be these classical music moguls – the Silk Road Ensemble opens up the discussion for music, arguably the most crucial component for community.

Marissa Garcia (marissagarcia@college.harvard.edu) is awed and inspired by the Redefiner and the celebration of culture!