“This weekend our program will donate $5 for each goal that we score in our 4 games to Harvey Relief!” 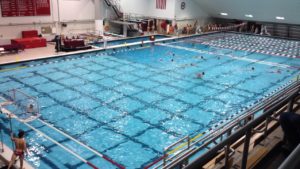 The Tweet was a statement to the world that reflected awareness and consideration amidst turmoil. In the athletic world, everyone from J.J. Watt to Houston’s own Kelvin Sampson has been involved in providing aid and relief in the form of monetary donations, clothing, or much needed supplies. Quick to respond to Harvard’s announcement were Princeton, Brown and Wagner, all saying that they too would follow in Harvard Water Polo’s footsteps. On the other hand, Harvard’s own Athletic department was also ready to follow, with Volleyball and Football getting involved in the outreach as well. Across the country, the support that Houston has received from Athletic departments alone has been tremendous.

At Harvard especially, it is easy to get lost in ourselves. With classes starting, career fairs, comps, retreats, and seeing friends again, the threat of losing touch with the outside world is a constant one. I personally felt it pretty early on in the start of my sophomore year; the special kind of stress that Harvard tends to put on its students is one that sometimes displaces empathy in a broader sense. So when Harvard Water Polo makes such a statement, it’s not only a stand of solidarity with Houston, but also signal to the rest of us, here on campus or nearby: even if we are not personally affected by the crisis, there’s a part of every single one of us that understands such struggle and the necessity of support.

Nikhil Suri, a sophomore at Harvard on the Men’s Water Polo team captured this idea perfectly. He said, “One of our teammates is from Texas, but the main idea behind raising money for Hurricane Harvey was to give back and contribute to a cause that we felt we could positively effect.” While one teammate had a direct connection, the others set the stage for the rest of campus, and the country as a whole, regardless of a personal connection. To get the other teams involved, Harvard Water Polo Team took a proactive approach: “We also began a series of shout-outs on Twitter to other teams participating in the tournament and many joined in with us.”

The Bruno Classic was a beginning for the Water Polo Team, and as much as it was about giving back, the matches were also important for the team as well. When asked what his personal goals were for the season, Nikhil was very clear with the success the team has had in the past and where he hopes they will be come the end of the year. “Personally this season, I’m most looking forward to the opportunity to help my team repeat as Eastern Champions and return to the NCAA final four.”

This past weekend’s matches includes games on Saturday against No. 3 Stanford and No. 7 Pepperdine for the No. 10 Ranked Harvard team at Blodgett Pool. Coming into the matches, Harvard had had its prior struggles against both teams. Their series record against Stanford was 0-6, whereas their record against Pepperdine was 0-4. Unfortunately, Harvard continued to struggle against the two teams, losing the matches 21-5 and 16-7 respectively. Of course, with the start of the season, came firsts for many new members of the Harvard Team, including for freshman Dennis Blyashov, who scored his first goal. Sunday’s matches were a different story for the Harvard team; that includes games against McKendree and Wagner. Coming into the games, Harvard had yet to play McKendree and was 3-0 against Wagner. At the end of the day, Harvard took the match 19-5 against McKendree and walked away winning the match against Wagner 14-9, finishing the Bruno classic 2-2 at the start of the season. The match against McKendree also gave Freshman Ben Wagner his first scored goal, while six goals came from Charlie Owens, a sophomore. I asked Nikhil to reflect on the matches a few days after the weekend, and he said: “we played great teams both on Saturday and Sunday, and I think that each game was competitive and gave us a chance to come closer together as a team while executing our game plan.”

At the end of the day, every aspect of the weekend was important. Whether it was freshmen scoring their first goals, the team gaining their first win, the donations to Houston, or the combined efforts of numerous schools to make a difference, the weekend had a special sort of significance. Harvard’s next set of matches is this upcoming September 9th, against George Washing and Chapman, both away at Princeton. Harvard’s next set of games at home are slated for October 1st, against St. Francis and Iona, with both matches being conference games.

Tushar Dwivedi (tushar_dwivedi@college.harvard.edu) hopes other members of the Harvard community continue to follow the team’s example of empathy and action.