The Indy sat down with student author Briuana Green to talk about her new book, The Fall, and what’s going to happen next.

If five years ago, you’d told Briuana Green ’18 that she’d be a published author before graduating college, she might not have believed you. But today, she’s exactly that.

Originally from Arkansas, Briuana came to Harvard without any concrete plan of how she’d write a book, but she had known for a while that she wanted to eventually. What she didn’t realize was that during her sophomore year of college, her sister’s new high school experiences would inspire her to write her first young adult novel—The Fall. 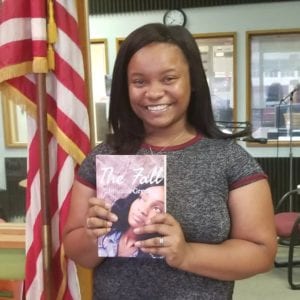 Available in printed and e-Book version on Amazon, The Fall is Briuana’s account of “five best friends from very diverse backgrounds. You get to see how that affects each of them personally.” It’s told from the perspectives of two sisters and of their best friend, and Briuana says, “They are all going through different issues with high school, questioning their spirituality—which you also see in play from their different perspectives. We talk about things like race, religion, peer pressure, and romantic relationships.”

Undoubtedly, these are important issues that would be relevant to write about at any time; but Briuana felt an urgency to the project when her younger sister began to encounter the same struggles that many people do as she started high school last year. She felt that her sister and her friends could benefit from reading a novel that addressed the important issues they were confronting and demonstrated a positive solution—and she recalled a Toni Morrison quotation that had prompted her aspirations before: “If there’s a book that you want to read, but it hasn’t been written yet, then you must write it.”

During her sophomore spring, Briuana began the endeavor of writing a novel. In what felt to her like a very long process, she began by outlining her ideas chapter by chapter—an outline that considerably transformed over the course of the writing process. She wrote down her ideas of the characters in the story—their backgrounds, ages, likes and dislikes—and imagined their personalities. And then, she started writing, and revising, and writing again.

A year and a half later, now a senior living in Adams House, Briuana is a published author. She says that the reaction to her work has been positive, especially from those in her hometown who have bought and read the book. She has found that the most rewarding part of the experience is when readers tell her that they connected with one of her characters and were touched by the storyline, and she even reflects on her own experiences through those of her characters.

While Briuana has already started her next book—a sequel to The Fall, which she said ends on “a bit of a cliffhanger”—she’s also reflecting on her experiences and finishing her senior year here at Harvard, where she studies Psychology. She says that she constantly thinks of ideas about what the characters will do later in the series, and working on the sequel helps her to keep her thoughts together as she ponders bringing the story forward into college.

When asked about her biggest hope for the book, though, she says, “I want it to impact girls in high school. I feel like high school can be so hard and there are some things you don’t really feel comfortable talking about to other people, and I feel like my book covers some of those insecurities we experience in high school and those secret things we don’t talk about. If young girls can see how the characters handle these things and they can relate to one character, it might impact their life and their high school experience.”