Like my peers, I, too, am very stressed out. Although my efforts to sustain a healthy relationship that provided stress relief were not fruitful, it turns out I don’t really need to bang one out to prevent a tension headache mid-final exam studying after all. Luckily, as an upperclassman, I’ve found that house spas are truly a blessing. There’s no better way to “Treat Yourself” than some solitude in the spa’s massage chair. It doesn’t take long before you start to realize that this massage chair triumphs over nearly all of your previous stress relief ventures… 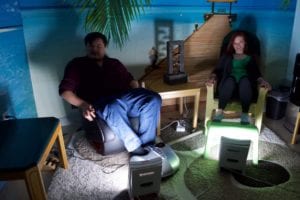 Reasons why a house spa’s massage chair is better than straight boys (a nonexhaustive list, to clarify):

Not having to worry about what the massage chair is going to think of you afterwards if you ask for something different is a big perk. None of that small talk or attempting to decipher what it means when he “wow” reacts all of your recent Facebook profile pictures but hasn’t texted you back yet. You can really just sit back and relax because it’ s just a half hour of fully concentrating on you and your comfort. With your typical straight boy, you’re lucky if you can clock in some “me time” before he starts going on about how “I swear this doesn’t usually happen” and is ready to pass out.

2) Worth a lot of money but won’t remind you about it.

Massage chairs aren’t permanently clad in salmon shorts and boat shoes like most straight guys on campus are. Yeah, it cost a pretty penny for this experience to happen but you’re under no obligation to recognize how much the chair is worth it or make it “worth it’s while” in the same way that its counterparts may.

3) Doesn’t make you keep reminding it that it’s the best massage chair you’ve ever been in.

There’s something about being asked to affirm that this is the best experience you’ve had that takes away from it being that great of an experience. It’s understandable to give credit where credit is due, but being direct about wanting someone to compare you to their past experiences and validate that this is the best time only implies they’re skilled at multitasking and that you aren’t keeping them that preoccupied at the moment.

4) You can literally indicate exactly what spot to get without bruising its ego.

I’m still unsure why sex sometimes turns into a game of telephone where “YES, RIGHT THERE, DON’T STOP” turns into “yeah, just feel free to take a break and switch speeds, positions, and target, you’re doing great kiddo.” It’s astounding that in his search to find himself, your typical straight boy never quite mastered the art of finding the clitoris. Being able to indicate exactly what you like using a keypad is incredible. There’s also the added bonus of telling it to flip you backwards or choke you a little bit without worrying that they’re too vanilla for that.

It’s one thing to tell me we’re going to set up camp and vacation in Pound Town when we’re really just going to drive through on our way to Snoozeville, but at least take the scenic route beforehand so I’m not still awake staring at the ceiling an hour later wondering what I should have done differently in life. If I wanted to feel that disappointed, I could’ve just booked a Motel 6. If I want to go again, I can immediately press the button to start another round – no Gatorade breaks needed.

6) Can unhook my bra somehow…wow when did that happen? We’re moving so fast…

Having large breasts means my bras could practically double as a straight jacket. As a queer woman, as least I’m getting some support even if it’s only coming from my underwire. Guys struggle to release them but also refuse to acknowledge they need any help with it, which just leaves me sitting there pretending that I couldn’t give the ol’ gals freedom with one hand and a quick tug. Massage chairs are kinda like that cool guy with the leather jacket who smokes cigarettes while leaning against buildings and has a flask in his pocket when it comes to how smooth they are at making a move. Not only will you not realize they’ve flawlessly unclasped your bra but you won’t even remember that you had one on because of how relaxed you are and knowing that nobody has any business being that relaxed while wearing underwire.

7) Won’t tell any of the other massage chairs about anything.

It’s mostly because massage chairs are inanimate but I also like to think they would have a higher level of respect for your privacy than the typical straight guy at Harvard. You don’t have to worry about running into one of their pset buddies in the dining hall only to recognize that knowing look on their face that says, “I know what your favorite position is and the place on your neck to kiss to immediately unlock the floodgates in your pants.” There’s something really special about knowing that this isn’t going to ever get brought up again and you can just live in the moment.

8) You both know what this is.

You’re not expecting anything out of it except to be relaxed. You don’t have to worry about whether you’re ever going to come back to this spa or feel the need to reassure yourself that you deserved that massage. With straight boys, it gets confusing and complicated somehow, regardless of how simple it was meant to be. It’s surprising that for such a fortuitous gap year that he hasn’t stopped talking about, he didn’t manage to learn how to say sorry or ask how your day is going. But with a massage chair, you aren’t expecting that and you are fine without.