Ghungroo is the name of the metallic bells that are strung together into a musical anklet. This anklet is traditionally worn by performers of classical Indian dance. However, on our own Cambridge campus, this name has come to mean a lot more. Harvard’s Ghungroo has come to encompass sentiments of friendship, humor, colorful movement, and a celebration of culture. The annual show in the Radcliffe Yard’s Agassiz Theater of Ghungroo is the University’s largest student run production. This year, as it took place over Junior Parents Weekend, it was a soaring success!

The shows took place on Thursday and Friday evenings, with two shows on Saturday. The preparation to put on four shows in the span of three days kept the cast and production staff busy right up until and through the weekend. But every member of the cast and staff will surely say it was worth it! Evident by the trend of students who keep coming back year after year and seniors who make it a goal to participate prior to graduation. In fact, the way to join Ghungroo is an application process that takes as many students as possible but largely operates on a first-come-first-serve basis. Therefore, the application is usually closed approximately 10 minutes after opening! 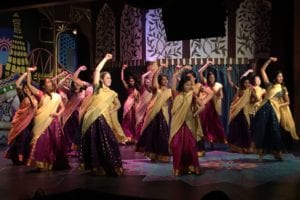 Still, the result of this process and the shows historic success on campus results in students of every background wanting to be a part of it. The South Asian celebration that inspires this spirit of involvement grows into a celebration of shared traits and experience. According to one of this year’s Producers of the show, Vinay Iyengar ’18, “The highlight of Ghungroo for me was seeing such a large and diverse cast coming together in celebration of South Asian art and culture. Ghungroo is the largest student-run production on campus with over 400 performers and is really a model for what inclusivity and cultural exchange should look like on Harvard’s campus. Most of the performers are non-South Asian and have never had any exposure to the culture or dance forms. Seeing them come together in a span of just two months and put on this vibrant show is just incredible.”

He continues, explaining that the difficulty in producing a show of such magnitude did in no way take away from its triumph; “The most challenging part of producing the show was a direct byproduct of the show’s size and scope. For example, the cast of the show is larger than the capacity of Agassiz Theater itself, so managing logistics and tickets sales for four incredibly large and complex shows was a challenge, but overall such a fun learning experience.”

The audience also showed variety in ranging from the smilingly supportive family members to the rambunctiously cheering roommates and friends – but everyone seemed to have a good time. Senior member of the production Kavya Pathak ’17 certainly did; “This show was awesome because the directors and producers managed to keep the humorous spirit that Ghungroo is known for, while also tackling the issue of the generational gap that many south Asian students feel with their parents. This topic resonates with both students and their families, which makes the show really special.” Indeed, while maintaining its celebratory tone, the show artfully weaves together comedy and stories of Harvard students as we all try to make the most of our time here. For many, doing so necessitates being a part of Ghungroo.

Caroline Cronin (ccronin01@college.harvard.edu) congratulates all those who made Ghungroo a special show this year!