One action at a time.

On Wednesday February 22nd, Donald Trump rescinded President Obama’s protections for transgender students. The protections, put in place during the Obama administration, allowed public school students to use the bathroom that aligns with their gender identity. Under the new policies of the Trump administration, individual schools will be free to allow students to use the bathroom of their choice, but no protections are in place for students in schools that force them into bathrooms based on sex assigned at birth. 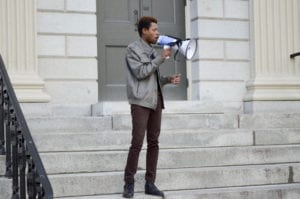 Reactions around the country have been swift and outraged. Celebrities from Laverne Cox to Lady Gaga to Secretary of Education Betsy DeVos have spoken out against the order. At Harvard, Sheehan Scarborough, Director of the Harvard College Office of BGLTQ Student Life, released a statement in support of transgender students. The statement, released Friday, serves as an affirmation of Harvard’s continued protections for trans students and commitment to supporting trans members of the community, addresses trans students.

Although the commitment of the Office of BGLTQ Student Life is admirable, Harvard’s support of transgender students has historically proved inadequate to address the needs of trans students. Gender-neutral housing was only made available in every upperclassmen house in 2015, and access to gender-neutral housing for first years is still severely limited.

In response to both the Trump announcement and to the administration’s resistance to adopt more trans-inclusive policies, Trans Task Force, a student group focused on transgender issues, held a rally in front of University Hall to show support for trans students at Harvard and across the country. The rally, attended by dozens from the Harvard community and beyond, featured speakers from Queer Students and Allies, the Black Students Association, the Harvard Islamic Society, the first year BGLTQ specialty proctors, and Harvard Staff.

The rally, planned quickly in response to recent events, integrated voices of concern and anger towards the policies of the country and the university with a sense of solidarity and determination. The rallying cry present throughout protests at Harvard and across the country of “What do we want? Justice. When do we want it? Now. If we don’t get it, shut it down” rang throughout the yard on Monday evening. Over and over. 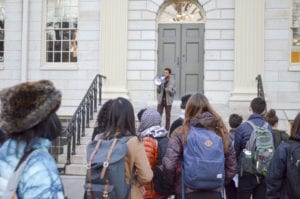 Speakers at the rally talked frequently from places of personal experience. First year BGLTQ proctor Lispeth Tibbits-Nutt spoke poignantly of what it’s like to feel your own skin. She talked about being a masculine presenting woman and the way she has spent years apologizing for others’ confusion and uncertainty about her gender. Sheehan Scarborough shared his experiences of feeling isolated and invalidated in his own identity.

The right of every person to feel safe in their school and in their environment should not be questioned. Yet for trans students, this right is frequently under attack by bills that seek to keep them out of public spaces, out of bathrooms. Jonathan Roberts ’17, who facilitated at the rally, drew parallels between the current legislation of the use of bathrooms by people who identify as trans and the separate bathrooms for white people and black people put in place in the not so distant past.

To go into a public restroom should not be a source of anxiety. Yet the current policies of the Trump administration force trans students to choose between confronting gender dysphoria by entering the bathroom aligning with their assigned sex at birth and facing potential violence and backlash by using the correct bathroom. This is a choice no one should be forced to make, but it’s a choice many Americans confront daily.

We are not free of such discrimination at Harvard. Just last year, a gender-neutral restroom sign was defaced in Eliot House. Even here, trans students are still subject to discrimination and violence. But as Mo Kim ’18 said in their speech at the rally, “We are here. We are loved.” We can only hope that such sentiment prevails.

Megan Sims ’18 (megansims@college.harvard.edu) loves and supports her trans friends and hopes to continue the fight to protect them.