Harvard urged to take responsibility as a political actor.

With the 2016 election and changing of power, Harvard students called on their university to provide support in resisting potential policies that would hold negative consequences on a larger scale. While student groups of all kinds have been taking cause to heart on the political front for years, the University has typically chosen to refrain from being a political actor. However, as one of the most prominent and powerful institutions, Harvard has social and political power and influence that cannot be ignored.

Only recently have community members heard the University’s stance on the current political climate. On January 29, President Faust addressed the immigration ban in an email sent to the Harvard community. In this message, the University’s values and ideals were emphasized, as well as how deeply rooted the University is in global diversity. Faust states that the University has a “robust commitment to internationalism” that cannot be discounted and remains integral to the learning environment and aspirations of those in the community. These travel restrictions have not only caused the distress and inconvenience to students and faculty heading back to campus from listed countries, but an overall sense of insecurity widespread. While Faust explains that there are resources through the university available for international students and faculty, the involvement of the University in a joint statement expressing concern with the executive order is a progressive move.

Faust went on to note the concerns amongst Muslim students who feel the strain of the order. A commitment to hiring a full-time Muslim chaplain, of which Harvard has never had, is a clear and prominent expression of support on behalf of the University. However, students are gro concerned about the sincerity of such statements, as the necessity to create supportive spaces and actions is increasing.

President Faust’s determination to prevent Harvard from becoming a political entity has further influenced decisions to declare Harvard a sanctuary campus for undocumented students and others vulnerable to impending reform under President Trump’s administration. In November, Chief Francis D. Riley of the Harvard University Police Department (HUPD) released a statement that immigration status will not be a factor considered and the department would not be enforcing federal immigration laws. Student’s’ citizenship status will remain confidential while Harvard works to expand the abilities of the Harvard Immigration and Refugee Clinical Program that provides legal advice.

Faust and 200 other college and university presidents signed a petition supporting DACA, along with reaffirming her support for the DREAM Act. However, during a meeting with members of Act on a Dream, a student group supporting undocumented students, Faust confirmed that Harvard would not be taking the status of a “sanctuary status” in order to refrain from political connotations. While President Faust has urged the Harvard community to come together and support vulnerable students within the community, many students have continued to feel unprotected.

The executive order is only the most recent of new policies from the Trump administration that would affect Harvard students. President Trump’s plans for addressing climate change are counterintuitive and reverse years of research and policy advance. Citizens are growing more aware of the concern that global warming presents and calling for action in order to address climate change in recent years. Divest Harvard, a student group advocating against investments of the Harvard endowment in fossil fuel companies rather, has been vocal in these issues on campus the last few years. The destruction of oceans, droughts, and more frequent natural disasters have wreaked havoc on the lives of millions. The group has driven discussion about Harvard’s investment in top fossil fuel corporations, which often are capable of influencing policy actions. Divest Harvard’s campus presence and resources date back to 2012 and has grown significantly.

Harvard faculty members, too, are joining the movement. A planning meeting for the Spring 2017 All-Campus Divestment Teach In was announced on the Harvard Faculty Divest website for December 8th. With over 250 faculty members signing in favor of this petition, the pressure for progress surges even after the original surge of support in 2014.

In a 2013 statement by President Faust, members of the Harvard community were informed that University divestment from the fossil fuel industry would not be considered. As the endowment funds are meant to advance Harvard’s mission to provide students with prestigious education and research opportunities, the University will continue its investment for financial gain rather than to make any political statements. Faust went on to argue that divesting Harvard’s investment would not answer the concerns, as these shares would be bought by others who would continue support the fossil fuel industry.

On April 12, 2016, four Harvard students were arrested during a sit-in to protest Harvard’s continued and growing investments in fossil fuels and similar interests. This was not the first or last major discussion from Divest Harvard. Harvard’s annual “Heat Week” calls on the Harvard community to come together to discuss and advocate for climate justice and take action against the climate crisis.

During a meeting with members of the Harvard Corporation in October 2016, Divest Harvard members were told that Harvard will not be divesting from its investments and the fossil fuel industry. According to Divest Harvard’s analysis of Harvard Management Company’s SEC filings, $34.6 million of Harvard’s endowment is invested in the top 200 fossil fuels companies.  Although many of its peer institutions (i.e. Stanford, Oxford, and Yale) have taken steps away from investments in fossil fuels, Harvard’s endowment will remain tied to these companies. The University’s lack of investment in the coal industry is a result of coal’s decline as a financially advantageous pursuit.

In a December email sent to members of the Harvard community, President Faust boasted the university’s achievement in reducing greenhouse gas emissions by 30%. Although a task force has been created to discuss the future of Harvard’s climate commitment and further initiatives, Harvard’s role in combating climate change is not expanded on past the institution. While implications that Harvard is acting as part of a global plan towards reducing the impact of greenhouse gases are made, the University fails to clearly explain how it compares to peer institutions when ventures seem contradictory to this mission.

The trend of vocal support but inadequate action was and is also seen in the aftermath of the HUDS strike last semester when concerns for the working class became a personal topic students confronted on campus.

During the strike, an email sent by the Vice President for Human Resources outlined the current contract that workers have with the University. The statement focused on comparing how Harvard provides for its staff compared to the national and Cambridge average. While the $21.89 per hour average seems higher than the Cambridge living wage of $15.04 per hour, HUDS workers typically only work for 38 weeks a year. Throughout negotiations, HUDS workers were being proposed health care cuts that would make it “catastrophically unaffordable,” according analysis in line with the World Health Organization. 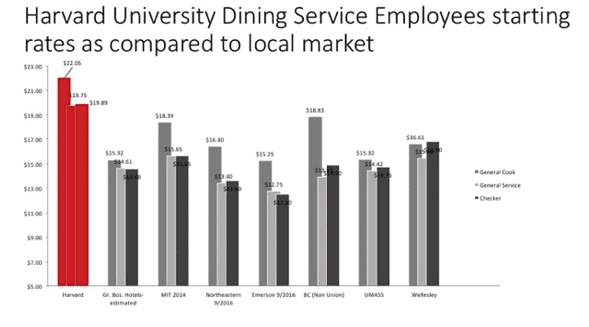 Harvard’s near-bragging of how the HUDS workers are provided for in comparison to similar positions across the country and within Cambridge directly contradicts the notion that the University is resisting rising above current standards. However, by fighting change Harvard was sending a message that members of the Harvard community in certain roles were less important to the well-being of the institution.

Members and allies of the undergraduate Student Labor Action Movement (SLAM) provided over 3,000 student signatures on petitions supporting HUDS workers and their demands. It was the students who sat in the lobby of 124 Mt. Auburn with HUDS workers as they bargained for their final contract that gave in to demands. After protests, walk-outs, sit-ins, and teach-ins, no student on campus escaped becoming involved or, at the very least, informed of the issues at hand.

Actions that could turn Harvard into a “political actor rather than an academic institution,” according to Faust’s letter, would damage the ability of the University to be an independent entity with the mission of advanced academia and research. However, to argue that Harvard does not already hold social and political power seems fallible. Harvard has long been seen as a leader and role model on a global scale. The decisions made represent more than just this Ivy-League school.

In fact, Harvard has always had a political and social influence globally that we cannot choose to emphasize or ignore at will. Each decision or lack thereof sends a message that will lend itself to further decision making at various other institutions. While it is important to recognize that Harvard’s own students will go on to be global leaders themselves and therefore absorb the statements and actions of their alma mater, whether in favor, this makes these individuals stronger agents. Neutrality is never an option in a leader, especially when historically we have led by example.

Hunter Richards (hrichards@college.harvard) applauds those who worked and continue working to address these issues on campus and beyond.