Less than 3 weeks ago on February 4, the “Harvard Memes for Elitist 1% Tweens” Facebook page was created. Although created and originally populated mostly by freshmen, the page has now added over 2,200 members. While not all are Harvard students, the posts have been widely received positively and many students have contributed their own memes to the group. Over the past week, the group’s membership has increased rapidly and no longer is dominated by any specific class year or demographic. “Everyone can join, we value inclusivity above everything else,” says the page’s creator, Rebecca Chen ’20.

While memes may often be discounted, they act as a medium of expression that allows people to share their experiences and relate to one another about commonalities. The word “meme” was actually coined by British scientist Richard Dawkins in 1976, and, according to Merriam Webster, he defined as a “unit of cultural transmission.” Memetic is the adjective. 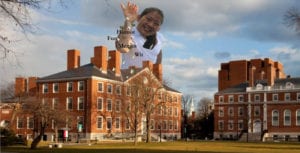 At many other colleges, similar pages to the Harvard Memes have sprung up and become popular amongst undergraduate students. The idea for the Harvard group was inspired by meme groups of other colleges. “I felt that Harvard needed one too, so I took the step for all of us,” says Chen. Using a title that “is definitely a stereotype of Harvard students. The joke is that we aren’t actually elitist or 1%,” explains Chen. Initially, with the support of her friends Kristie Colton and Georgia Seidel, Chen added every Harvard friend she had but the group remained at barely 100 members until fans of the page began inviting friends to join.

When asked what she thought of over 2,000 people joining the group so soon, Chen said, “I think this is the modern cultural revolution that we need. I’m really glad that we can all connect through these memes and I’m even happier to learn that my humor is appreciated.” Chen loves the original content (OC) memes and highly encourages all members to post.

Chen has already begun moderating the group, which is a common practice for similar meme pages on Facebook. Any discriminatory, reposts, or hateful content will be deleted and all memes should relate to Harvard in some way. Within a Harvard-specific meme page, students can blend the popular humor templates currently trending with figures from the college to express the unique Ivy League culture at the college. Memes referencing Lamont, Dean Rakesh Khurana, comping, career plans, and classes have gained considerable popularity.

Whereas students once shared their feelings of stress or frustration about aspects of their college only within their close friend groups, now there’s an outlet amongst hundreds of others who can relate. While not all images being posted are solely directed at Harvard, the experiences being shared are broadly understood by college students.

Although another group meant for Harvard-specific memes was already created, “Harvard Memes for Elitist 1% Tweens” became popular very fast. The previous group, “Harvard Meme Crew,” has a ‘closed’ privacy setting that prevented the growth of the page and has less than 200 members. However, both pages have been active and featured many contributing memes from members beyond admins.

“Harvard Memes for Elitist 1% Tweens” has sparked unity and created an outlet for students. Although many of the images featured are at the expense of Harvard and even, at times, its students, the overall reception has been positive and the group continues to grow.