By The Sports Editorial Board

A discussion with the Club Squash Captain.

For those who enjoy sports, but lack the ability or time for a varsity commitment, club teams offer a great path to health and wellness. For this week’s issue, the Indy interviews Jackson Reynolds, the captain of a particularly Harvard-ian team – Club Squash.

JR: I’m from Darien, Connecticut which is a prime area for squash – New England and California are the hot spots here in the United States. I went to a school where they had a very good, nationally-ranked squash program, so I learned about it through that. A bunch of my friends had been playing, so I thought I might want to try it out.

It’s a great sport, both physically intensive and very challenging. You get to challenge both yourself and the other person on the court, and that’s about it – you get that competitive edge and a great workout as well. Coming to school, I was walking around the activities fair and saw the club squash table and thought, “Oh, I guess I’ll try it at school.” I thought it’d be a great opportunity to continue playing the game, and I found it to be a great program. Most people who play on the club team have never even heard about the sport before coming here.

It’s a great experience now as captain, teaching people how to play and seeing them learn the game. Squash might have a stereotype as a very WASPy sport and very exclusive and elite, but it’s actually not. Tennis has become more mainstream over time, and I feel squash is on the same trajectory — just a few years behind. It’s a great option to have fun and get a good workout in within a competitive atmosphere. 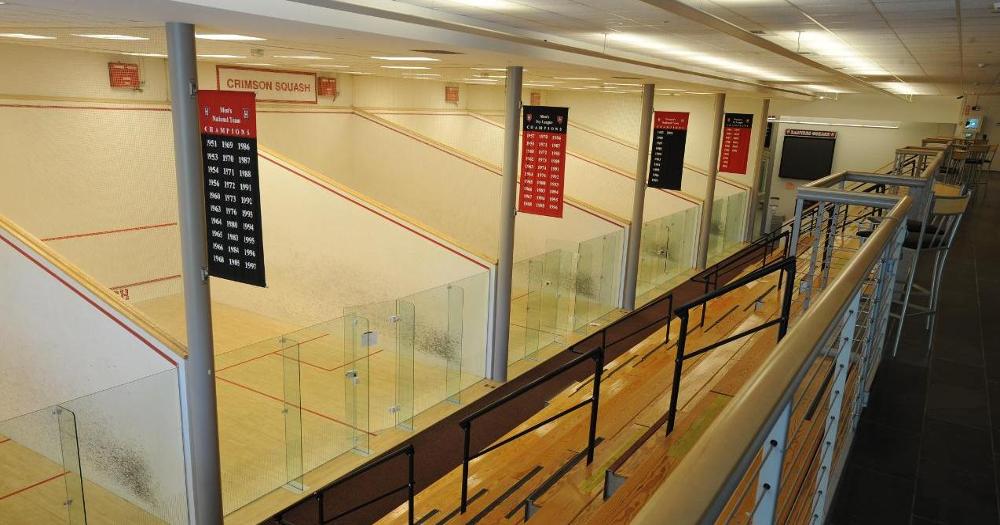 Indy: It seems an “Old Harvard” kind of sport – we have squash courts in the Lowell basements and throughout campus. But as you mentioned, it’s pretty easy to pick up, whether you’ve played a racket sport or not. How do you approach different levels of players coming into a club program? I suspect some people played it very well in high school, and others are completely new to it. How do you get these different groups going?

JR: For us, it’s mainly just about getting people to have fun and getting people to play. The practices are very open and anyone can come join. For the first few weeks of each semester the captains typically give lessons to people who never played before so they can get exposure to it. Throughout the season, we have a pretty open style, and the first few weeks anyone can play with anyone. Eventually a ladder develops, and people can play with others at their skill level and get the most enjoyment out of that.

We have probably a hundred who come and go. We’re pretty lax about when people want to come, but we get a lot of people out to the courts. You’ll find someone at your skill level, and have a good time and hit with pretty well.

Indy: Do you always play each other, or other schools as well?

JR: We do a lot of internal practices but we play about four to five other schools in a semester. In the fall, it’s mainly more local schools like Northeastern and MIT – we actually beat the MIT Varsity team last year.

JR: (laughs) In the spring, it’s more like other Ivy League club teams, like Yale, Penn, Dartmouth and Cornell. Brown started a team this past year as well.

Indy: Do you have different strings for these tournaments? First string, second string, and so on?

JR: It’s not super serious, it’s more of a question of whether you’ve come to practice a lot and what the skill levels of the other teams are. We have a top tier program, with a few people who could probably play at varsity programs elsewhere. So they may be too high a skill level for some of the competition that we play, but for the most part, if you come to practice and want to play, we can find a match for anyone who wants one. It’s pretty open.

Indy: In terms of health and wellness, it seems like squash is a pretty active sport. What are the greatest health benefits to the game, or mental benefits for student life?

JR: It’s a great game for your health and fitness. You’re sprinting, lunging, and moving around the court. It’s really good because most exercise is linear – you’re on a treadmill, or a bike, whereas this is more side-to-side motion and you get a lot more muscle movement there. We have practices on Sunday and Wednesday nights, so it’s nice to get a break from work and go out and get a hit in. It lets you take your mind off things for a little bit.

Indy: Are there any particular dangers or threats you perceive in squash?

JR: Well, there’s always the threat of getting hit by another racket or ball, but nothing too serious. If you’re not playing varsity level, it’s kind of hard to pull something, and if you do it’s usually not too bad.

JR: Yeah, just make sure you wear goggles, have the right shoes, and watch out for the ball. It’s pretty safe.

Indy: You ever slam into the walls?

JR: Once or twice. If you get moving too fast and lose traction you can hit the walls, but it really doesn’t happen very often.

Indy: It also seems like a great winter sport. It’s indoors, and when the varsity season is. Is the club more active in those months, when other games aren’t as readily available? Or is it pretty consistent in terms of who shows up?

JR: It’s pretty consistent. There are so many things to do here that the people who actually show up and play are the ones who come throughout the year. There may actually be fewer in the winter, since you have to cross the river to practice.

Indy: Do you practice at the Murr Center?

JR: Yeah, on the varsity courts, when they allow us to.

Indy: Do you guys ever use the Lowell basement courts, or QRAC?

JR: When people want to play outside of official practice, we’ll play at those places, but the Murr Courts are pretty open. Maybe some Quad people do the QRAC…

Indy: In closing, if people are interested in getting involved in the team, how should they go about doing that?

JR: If you go to our website, http://recreation.gocrimson.com/recreation/club_sports/pages/Squash , you can email us and go from there. It’s open to any and all.

If you’re looking for a reprieve from all your fall term woes or the comeback of your summer fitness, the Indy Sports Editorial board (sports@harvardindependent.com) thinks the squash court is the place to find both!