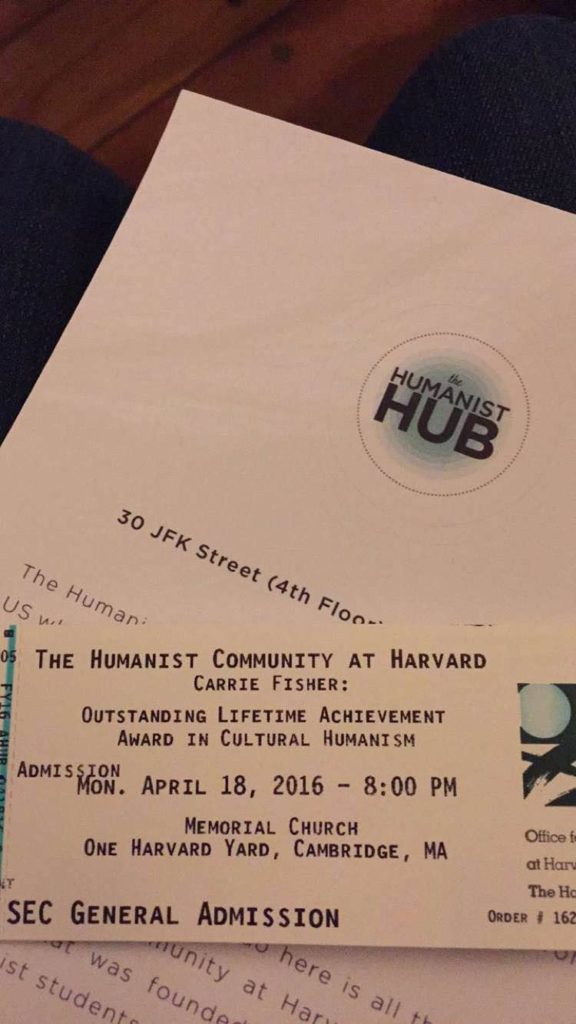 On April 18, Carrie Fisher was presented with the 10th Annual Outstanding Lifetime Achievement Award in Cultural Humanism. The award was given on behalf of the Humanist Hub, in partnership with the student group, The Harvard Community of Humanists, Atheists, and Agnostics (HCHAA). Individuals whose lives and contributions to popular culture and society exemplify the values of Humanism are awarded this honor in a ceremony, which this year took place in Harvard’s Memorial Church. The actress most famously known for her role as Princess Leia in the Star Wars franchise, Fisher has also established herself as an accomplished writer, actress, and advocate in her own respect. 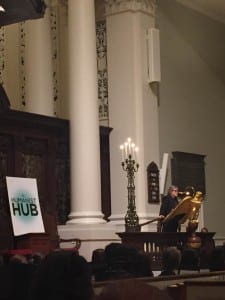 Particularly in recent years, Fisher has used her fame to advocate for mental illness. Fisher, who lives with Bipolar Disorder, discussed her bouts with manic episodes and how her memory has been long affected by treatment, medication, and the disease. The Emmy Award-winning BBC documentary “The Secret Life of the Manic Depressive,” features the actress in hopes of de-stigmatizing mental illness. Fisher has also spoken about her experiences with mental illness in her novels and memoirs, of which passages were read in welcoming the award-recipient to the stage.

Fisher also discussed her dark side while filming Star Wars. Recalling how she had been advised to lose 10 pounds for the first Star Wars film (although the actress was only 105 pounds at the time) Fisher discussed her battles with body image. On Harvard’s campus, students battle with eating disorders behind closed doors and struggle to reach out to the resources available to them. Many recent conversations within the Harvard community tackle the issue that plague available resources; such as Harvard University Mental Health Services not being diverse or empathetic in regards to the students seeking them out. Fisher provides important commentary.

Fans asked questions about the Star Wars franchise exposed troubling truths. When asked what she would change about the original films, the actress responded: “Well, the dress was difficult to wear without a bra.” Referring to director George Lucas’s demand that Carrie Fisher not wear a bra in order to be a more convincing galactic space princess, the actress takes note of the ridiculous sexism she faced early in her career. Fisher also criticized the dialogue, which she remarks was difficult to say. However, the actress was rejected when she attempted to change her lines. Another fan went on to ask Fisher about her perspective on the gender roles appearing in the Star Wars franchise, to which she responded, “We need more bitches in space.” The actress is vocal about her support of strong women and prevailing against a male-dominated environment, in any system of the Federation.

It is Fisher’s honesty and humor that make her an iconic advocate and inspiring individual. While many attendants of the award ceremony posed with Star Wars figures after the event and asked questions pertaining to the popular franchise, Fisher’s career has grown to be much more dynamic than her original fame. She has used her status as a beloved celebrity to help find humor in the problems of our current culture. As Fisher puts in, she likes to “simplify everything and make fun of it,” in order to keep things from ever getting too serious.

However, the actress did touch on serious topics. Suicide was among them. After mentioning her own experiences reaching out to the late celebrity Robin Williams, who committed suicide in 2014 after years of struggling with mental illness, Fisher looked inward. “While I didn’t want to live all the time, I didn’t want to die. You’re making a decision on the wrong end of illness,” says Fisher about suicide. She then went on to criticize how mental illness is perceived in society, especially concerning the failure of insurance companies to properly provide for treatment. Fisher noted that mental illness is often underestimated and overlooked, “as if the brain isn’t physical.”

Often times, those struggling with mental illness are reluctant to seek help. Particularly on Harvard’s campus – where students deal with stress on a daily basis in academic, social, and professional settings – mental health is a major concern that has recently become more of a focal point. With new administrative initiatives in place to accommodate for the host of experiences each student in Harvard’s community may have had – such as the Open Harvard grant which promotes discuss and awareness – speaking candidly about mental illness is an important step. In order to properly address the issue, it is first necessary to remove the stigma and allow students to come forward and advocate for themselves. When battling mental illness, individuals are in need of support from those around them and currently many students feel that Harvard has failed to provide this. To this effect, Fisher says, “You need community; you need balance.” 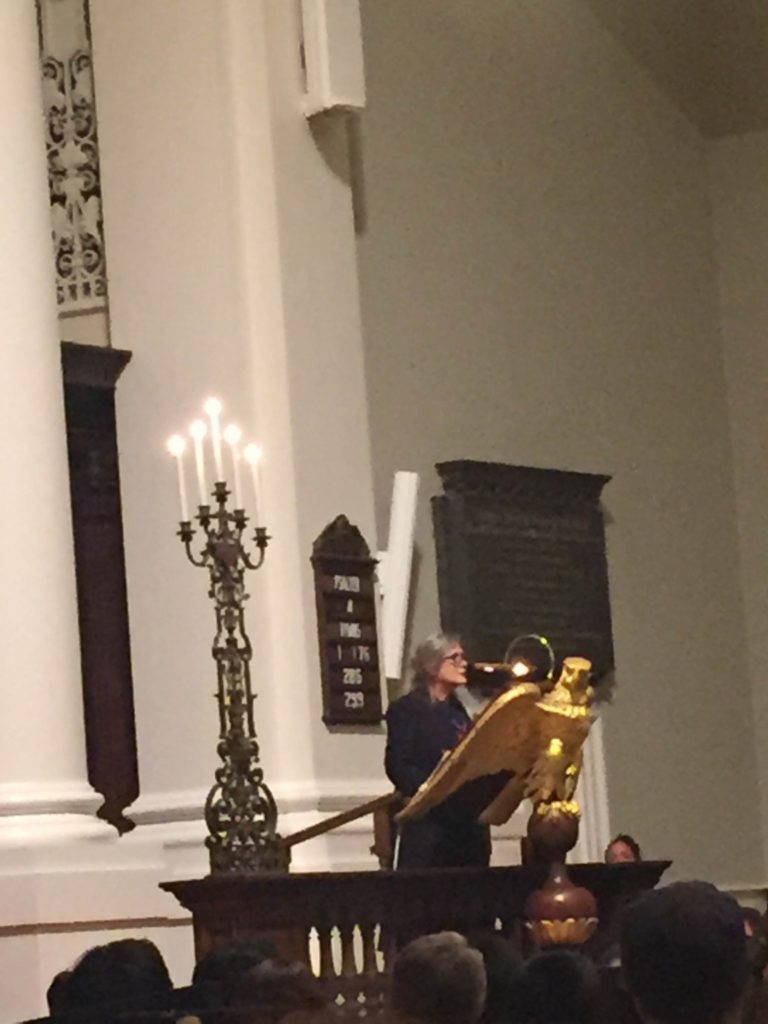 The topic of substance abuse followed in the same vein. Alcohol and other substances are common crutches to mental illness struggles. Although drinking and/or drug use may be part of common college experiences, the use of such substances as coping mechanisms exacerbates the harmful and unhealthy effects on the individual. As Fisher touched on her history of substance abuse, she remarked, “You have to be sober to deal with your moods. It’s important to get the help that you need.” Harvard’s amnesty policy allows students to seek necessary treatment when approaching critical conditions following drinking, but the same support is not as readily apparent to students seeking immediate care for mental health. While many students groups offer peer counseling, it has been said that the stigma and lack of open discussion about mental health inhibits students who many be in want or need of help.

One fan asked Fisher how acting has helped her to manage mental health in the context of her career. “It helps focus me. Anything that doesn’t go with the mental illness topic is helpful,” remarked Fisher. “Education is good for that,” the actress went on to say, mentioning again that she herself had not finished high school. More importantly, the emphasis must be placed on resilience and the strong will to not be defined by one’s mental illness. Mental illness has an impact on all aspects of life for affected individuals, which makes pursuing goals and receiving criticism difficult. “You have to be willing to outlast things,” declared Fisher about dealing with struggles in order to be successful.

However, mental illness is not always an impediment to an individual’s ability to attain success. When asked how living with bipolar disorder has impacted her ability to write, Fisher answered, “Mania has been a great energy to write with and it’s calmed me down. I had an easier time because I’m a celebrity.” She noted that getting published takes having a network in place that connects you to publishers. A well-established support system allows for more success and available resources to cope with mental illness. A common sentiment among those suffering from mental illness involves the public’s tendency to reduce individuals to their mental health and disorders rather than acknowledging how their symptoms may affect, but not determine, their personalities.

For Harvard’s community, honoring individuals with strong careers in advocating for mental health while managing to remain honest and humorous allows students to become more empowered in advocating for themselves. Carrie Fisher may be best known as Princess Leia, but her career has helped shape the lives of many individuals suffering from mental illness and struggling to establish themselves in our current patriarchal, ableist society.