Radcliffe Lightweight proves to be the best college on the water at Head of the Charles. 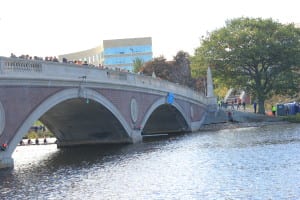 Quick question: what is the best sports team on Harvard’s campus? You may have said football, basketball, women’s soccer, or on the more obscure side, squash. All of these are great guesses, but all would be objectively wrong. The real answer here is Harvard’s women’s lightweight crew. The names Pate, Henry, McNeill, and Lang should float off your tongue with the same frequency and reverence as Saunders, Chambers, Stanton, or Sobhy. Why? Simple, they win and have won. In the last three years, Radcliffe Lightweight Eights has placed second, then first, then second in the end-of-year national race. The particular combination of Olivia Henry’16, Gabrielle McNeill’16, Naomi Lang’16, and Elizabeth Pate’17 has rowed on the top boat since their sophomore year. In their time with the top boat, the four women have set course records in the EAWRC sprints and Head of the Charles. They were part of an undefeated season in 2014 that saw the boat named Crew of the Year by the International Rowing Association.

This weekend saw Radcliffe Lightweight add one more title to its mantle: fastest collegiate boat on the Charles. Behind Henry, Pate, NcNeill, and Lang as so many times before, the crew finished less than a tenth of a second off the school record in Head of the Charles. It should come as no surprise that these four helped set that record as sophomores. In fact, Radcliffe was so fast this weekend that they only lost to one boat in the entire Lightweight division. It was the Dutch National team.

So, what does the rest of the season have in store? First and foremost, hope for a balmier winter. Last year, ice delayed the team’s spring start, and ultimately the team placed second in the national championships to Stanford, whom they also were runner-op to in 2013. Second, they will look for a repeat of their undefeated season from 2014. And, it will all culminate at the end of May with a hopeful national championship. Only one other lightweight class has won multiple championships during their four years with the program. Henry, McNeill, Pate, and Lang may just add their names to that list.