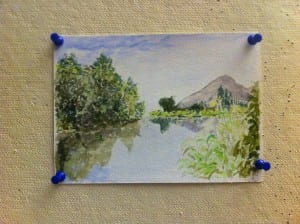 Beneath the brushed metal, polished wood, and prematurely creaking doors of the renovated Leverett House there lies a quiet and rather out-of-the-way gem for anyone seeking to practice the visual arts in their spare time. The Leverett Art Room, kin to similar art rooms in Dunster and Holworthy (for the freshmen) among others, is buried deep within the subterranean basement complex of McKinlock. At the end (and on the left of) a long tunnel fittingly framed with original paintings from Leverett residents, the Leverett Art Room is open 24/7 to anyone with Harvard swipe, and features a wide-open space in which to create all manner of visual arts—and a perfect space for a lapsed visual artist to reawaken old habits.

From my elementary and middle school days through high school, I was an enthusiastic practitioner of the traditional visual arts: figure and portrait drawings, oil paintings, and watercolors done in the painstaking atmosphere of my art teacher’s suburban basement studio. Times change, however, and we must change with the times. As a now-pre-med science concentrator, it can often be difficult to squeeze the visual arts in between classes and the daily grind of life as a college student. It was for this reason that I decided during the sunny Sunday of the three-day-weekend to traipse down to the Leverett Art Room to reawaken long-dormant skills. Coming into college, of course, I had not entirely sworn off the visual arts, what with the constant appeal of doodling (more often than not during classes) and the occasional scratch-paper sketch. But I wanted something more substantial to play with, an artwork with more flavor than a furtive classroom sketch—and for that I needed to choose a more substantive medium.

The Leverett Art Rooms offer a wide choice of media to work with, ranging from acrylics and watercolor to canvas for oils. I, however, did not have the time for a long and drawn-out work, so I needed a quick medium. This requirement ruled out the use of oils, which require long drying times—most artists who work in oils often have multiple projects running in tandem so as to allow one painting to dry while the others are worked on. In this vein, acrylics with their chemically-synthesized quick-drying would seem like a better choice, and indeed this would be true but for the fact that I had never worked with acrylics before. This left watercolor as the best choice—quick drying, watercolors require fast work and careful application to pull off successfully. But they can be executed in the space of an hour or less, the biggest draw considering the problem sets jostling for my attention.

One rapid-fire decision and one hastily sourced landscape photograph (a sylvan river glade with an imposing background mountain) later, I was ready to start my artistic endeavor.  Watercolors are a tricky medium for several reasons: their quick drying nature requires fast work if you want to mix colors on the paper, and mistakes in watercolor once dry stay mistakes. Moreover, mixing of colors is a trickier proposition, as colors often dry on the paper far differently than they may appear in the tiny plastic palette. With all this suddenly remembered knowledge in mind, I made the first tentative brushstrokes, filling in a soft pencil outline of some leaves on the western bank in translucent permanent green. The colors at first barely seemed to even appear on the paper, their trails of pigment washing out into globules of water pooled on the surface. But with more pigment and more water, the leaves and flowers began to come into focus, bright leaves and strong green hues demarcating the boundary between grassy knoll and gentle brook.

To be sure, there were problems as the watercolor session went on. An attempt to paint around some delicate yellow flowers I had laid on earlier ended up leaving gaping white flower-shaped holes in the waterside reflection. Colors that I thought would represent everything from the dark depths of wooded forest to the proud spires of evergreens in the distance stubbornly refused to darken. But an hour and fourteen minutes after the start of my little artistic jaunt down memory lane, it was at least finished: a watercolor scene, done up in a soothing if somewhat subdued palette of greens, blues, and greys (the yellow flowers forgotten). But that hour and a bit in the Leverett Art Room yielded more than just a delightful little accouterment for my dorm room wall. Taking that little bit of time for yourself and reawakening any skill from the past, whether it be art or music or streaming television, is a delightful thing to do—and when Harvard subsidizes it directly, it becomes that much sweeter.

Andrew Lin ’17 (andrewlin@college.harvard.edu) is now taking commissions from anyone willing to pay him in pretzel chips and HUDS cookies.