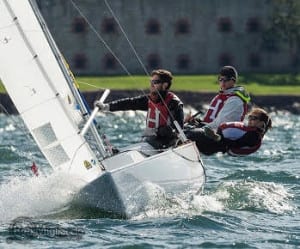 This past weekend, while many turned towards the Harvard victories at the Head of the Charles, the Crimson earned another victory also out on the treacherous waters of New England. This one consisted of saltier water, a few more life jackets, and markedly different vessels. But whether the crimson sails were unfurling or the crimson oars were feathering, the men and women of Harvard once again nobly met the standards to which they are held.

The Harvard Sailing team competed in the New England Matching Races Championships hosted by Salve Regina University. While, some people’s knowledge of the nautical arts extends only to what is available in movies such as White Squall and Master & Commander, the skippers and crewmembers of the Harvard sailing team are brimming with experience and skill to boot. This experience and skill was put to good use by the boat that won the championship over Saturday and Sunday. The intimidating team of Taylor Ladd‘18, as main and spinnaker trimmer, Nick Sertl‘18, as skipper, and Jacob Brandt‘16, as jib trimmer/bow person manned this vessel. On Saturday, October 17th, the crew finished fourth in a round robin of 8 teams. They then went on to slaughter Rhode Island (2-1) in the quarterfinals, outclass Yale (2-1) in the semifinals, and trounce Dartmouth in the finals (2-0) on Sunday, October 18th.

An appropriately proud Ladd says on the matter, “Winning the regatta was amazing. There was an identifiable point when we realized we might actually be able to win it, which I think really empowered us.”

This victory also led to Ladd, Sertl, and Bradt being named NEISA coed sailors of the week for Week 7 of the Fall 2015 season. In fact, this is the second week in a row that Harvard has had athletes named the coed sailors of the week since Andrew Mollerus’16 and Sydney Karnovsky’16 just received that honor after winning the A-division in the Moody Trophy race at University of Rhode Island on October 11th.

At the NE Match Races all teams were sailing Ynglings–a particular kind of sailboat that, according to the International Yngling Association website is, “a sleek and seaworthy small racing keelboat, succinctly described as an agreeable cross between a planning dinghy and a keelboat. Its design is classic, and its construction is durable.” The word Yngling actually means “youngster” in Norwegian as the original designer of the boat intended to make it for his young son.  Another common barque sailed by the Harvard team in these competitions is the radial dinghy, which is a singlehanded watercraft.

Ladd, Sertl, and Bradt’s triumph marks the first time Harvard has won the NE Match Race Championship since 2001. The first and second place finishers have, as a result, been invited to the Intercollegiate Sailing Association (ICSA) Match Race National Championship to be held in Mount Pleasant, South Carolina on November 20-22 this fall. There the Crimson will compete against nine other keen teams for the first time since 2005 when Harvard won a 10th place finish in Gull Lake, Michigan.  Ladd is excited for this upcoming championship, stating, “We went into the regatta not knowing what to expect, so this outcome gives us a lot of hope for Charleston. We’re looking forward to match racing some more, and being in the warm in late November!”

This past weekend Harvard also sent sailors to a few other races as well. Those who ventured to the Truxton Umsted Memorial Regatta finished third overall out of 19 teams with impressive performances by Juan Carlos Perdom ’17 on a solo Radial dinghy, A-division duo of Mollerus and Karnovsky, B-division pair of Marek Zaleski ’16 and Julia Lord ’17, and Andrew Puopolo ’19 also going solo. Furthermore, two crews combined earned a seventh place finish at the FJ/NC Firefly Invitational, hosted by MIT. At the Captain Hurst Bowl, hosted by Dartmouth, Harvard placed 14th of 18 teams. Finally, Harvard also won a 17th place finish at the Yale Women’s Inter-conference Regatta.

Well, its time to batten down the hatches because the season continues to keep our nautically inclined athletes busy as they sail into this weekend. Harvard will be hosting Mrs. Hurst Bowl and sending boats to competitions hosted by Brown, MIT, Boston College, and Rhode Island. But the other teams will surely give Harvard a wide berth, as the Crimson threatens to take the wind from their sails in our voyage to victory.

Caroline Cronin ’18 (ccronin01@college.harvard.edu) is in need of more  sailing jargon suitable for daily use!