A Review of the Fall 2015 Visiting Director’s Project in the Loeb. 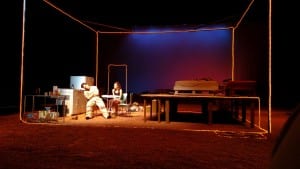 Sometimes, life is awkward. Sometimes, you have to go to the Harvard Box Office and say a very strange play title with a very straight face. Sometimes, you walk through the wrong door trying to get to the mainstage of the Loeb Drama Center, and sometimes you trip over your shoes trying to walk to your seat. But when the Harvard-Radcliffe Dramatic Club (HRDC) puts on a truly stunning opening performance of References to Salvador Dalí Make Me Hot, as they did this past Friday night, there’s absolutely nothing awkward about that.

In conjunction with the Office for the Arts, HRDC manages the Visiting Director’s Project, which brings a professional director to the Harvard campus for a semester to work with an undergraduate cast and crew. This fall saw Kat Yen, co-artistic director and founder of Spookfish Theatre Company and resident director at The Flea Theater in NYC. She, alongside producers Betty Lema’17 and Jared Sleisenger’16, directed this fall’s production, References to Salvador Dalí Make Me Hot, a play written in 2000 by José Rivera.

References captures a few critical days in the lives of Gabriela, a lonely army wife, and her husband Benito, who has just returned from the field. The small cast and setting belie the play’s historical depth, as it comes on the tail of the First Persian Gulf War. To a modern audience, Benito’s insistence that the war is over is ironic and his echoes of PTSD are painfully relevant today. Benito and Gabriela also evoke the specific relationship between the Latino communities and the U.S. Army, adding another layer of voice to Rivera’s work. Most centrally, however, remains the question of their marriage. Can you live with someone who’s lost what you fell in love with? Can you expect someone to stay as what you know when you’ve changed, too?

In addition to the complexities of the ideological content in References, it’s a practically tricky play to present. While the majority of the play takes place inside their tension-fraught home, the time Gabriela spends lying in the backyard is just as important. Dalí-esque surrealism comes into play when the moon must descend from the sky and make out with the human object of his affection. Gabriela’s cat flirts with a coyote and elopes into the night. Permeating the show is this seductive magical realism, shifting the weight of feeling convincingly into the force of physicality.

To capture this, the Loeb Mainstage is transformed into a field of gravel, representing the desert. The walls of their home fall away, and LED strips are instead hung from the ceiling to create the idea of a house. The moon is a man, waiting above in a catwalk, who climbs down a ladder to dance upon the desert floor. It is this spare yet ethereal setting that the characters fill with their despair, human wants, and poetic words, invoking the play’s namesake.

The duality of dreams and reality so fundamental to surrealism also comes out in the parallelism of the relationships that populate Rivera’s work. Cat and Coyote mirror the past and possibility of two lovers torn apart by death. Martin, Gabriela’s 14 year-old neighbor, demonstrates the stupidity and beauty of youthful impulse. The moon, ever watchful, gives Gabriela the barest fragments of poetry to frame her memories and guide her choices. At the end of the play, it’s uncertain whether the entire play has been a dream. Here, Yen and her cast excel in subtly tying together the motivations of Rivera’s characters; they weave an ambiguous tapestry of desire and destiny that, with willing suspension of disbelief, transfixes the audience totally.

Without spoiling the contents of the play, I can confidently say that Rivera’s words really come to life between the mouths of the actors. It’s easy to conceive unilaterally of a failing relationship between an empathetic Army wife and a callous soldier, or a tired soldier and his ungrateful spouse. But the ways in which Gabriela and Benito mirror each other in their wounds and flaws pull at the heartstrings genuinely. Gabriela feels like her husband has closed his mind and heart to her, and fears he’s stopped caring. Benito thinks Gabriela says that things are “like” other things too much, and desperately wants her to love him as much as he does her, though he struggles to love himself.

Eli Rivas ‘16 and Juliana Sass ‘17, who have both acted in previous HRDC productions, interact as Benito and Gabriela so movingly on the stage. With their words and with their bodies they evoke Rivera’s image of imperfect soul mates in imperfect love further tangled and marred by war. I am not afraid to admit that I shed a tear or two at certain points. I am also not ashamed to admit that, during a sex scene, I glanced at the elderly couple sitting in the front row to see their reaction. (They left. I leave it to your imagination the reason why.)

It’s this balance of humor and tragedy that different characters bring, and the flow of crass words and meaningful looks between them, that really ties the poetry of References to the reality of the lives it tries to capture. This is the real magic of the play. While surrealism may not be everyone’s cup of tea, References does a pretty good job of convincing you to try.

References to Salvador Dalí Make Me Hot will be in the Loeb Mainstage on Thursday, October 22nd, Friday, October 23th, and Saturday, October 24th at 7:30 p.m. Tickets can be purchased through the Harvard Box Office. The play contains gunshot sound effects and nudity.

Audrey Effenberger ‘19 (effenberger@college.harvard.edu) is two pieces of bread expressing the sentiment of love.