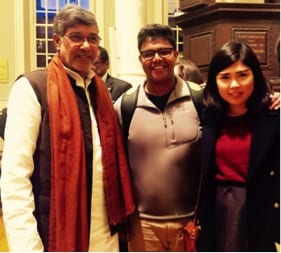 On October 10, 2014, the Norwegian Nobel Committee announced a joint Peace Prize to Kailash Satyarthi and Malala Yousafzai. They called it “an important point for a Hindu and a Muslim, an Indian and a Pakistani, to join in a common struggle for education and against extremism.”

While much is known of Malala’s struggle for education against the Taliban, Satyarthi’s story, unfortunately, had not received much attention before this. But ever since the prize, his work to save children from forced labor and slavery has received great appreciation around the world. Last week was one such occasion.

He is the first Indian to receive this award, which has previously been bestowed upon venerable individuals whose names ring almost like a roll call of honor – Kofi Annan, Ban Ki-moon, and Martin Luther King Sr. among others.

He accepted it with grace and delivered a speech that left everyone in the Church truly inspired. This inspiration wasn’t only a result of the heart-wrenching stories that he shared, but also of the manner in which they were recounted. We could hear in Satyarthi’s voice a vision of a brighter tomorrow that we would all want to be a part of.

He began by clarifying that child slavery was not a problem exclusive to developing countries. “Here, in the United States of America,” he said, “there are hundreds of slaves who are forced into labor, pushed into sex trade or trafficked into domestic labor. Undocumented immigrants, people in the margins of the society are pulled into a circuit of slavery.”

This is not a well-known fact, and worse still, often ignored as an anomaly we are comfortable believing that slavery was abolished over a century ago. But Satyarthi helped us confront the truth that evening, and he shared with us the driving force behind his work–a raging anger.

He said, and quite rightly so, that anger is nothing but an energy. It simply needs to be harnessed in the right manner to produce worthy results. He personally has been able to achieve that quite convincingly. He gave up his practice as an electrical engineer to found the Bachpan Bachao Andolan, which in English translates to ‘Save the Childhood Movement.’

The movement has been seen as the most successful of its kind in South Asia, having prevented thousands from servitude through community intervention, public awareness drives, and extensive rehabilitation programs.

He clarified that those working in the private sector could also increase their involvement in protecting children through corporate social responsibility initiatives.

While stressing the importance of mass mobilization combined with help from the corporate sector, he also highlighted the importance and necessity of global governments in ensuring that their children’s interests weren’t neglected. In his very humble style, he told us how “the Nobel Prize actually helped [him],” communicate his ideas to several heads of state, including President Obama, and get them on board to include clauses relating to child labor in the recently declared Sustainable Development Goals (SDGs) of the United Nations.

This was something he had failed to accomplish back when the Millennium Development Goals had been announced in 2000. He actually used his Nobel Prize as a means to an end, not an end unto itself!

Humanitarians around the world share the sentiment that in service lies their true satisfaction; Satyarthi is no exception. The Nobel-winner said that every time he hears the laughter of a child who has been rescued from bonded labor, and sees a tear roll down a mother’s cheek when she holds her child she could have lost forever, he witnesses “the glimpse of God.” This tender image conveyed the vast emotional struggle that many around the world have to overcome.

As the evening drew to an end, Satyarthi was thanked on behalf of all children in the world. It was a fitting end to a beautiful evening.