A Day in Beijing

You never forget your first love, and Beijing is no different. Although it’s been over a decade since I last visited the city, its charms were recently renewed for me when I met up with a few friends to go sightseeing in the capital of China. 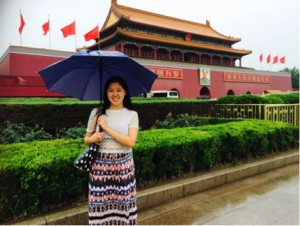 Once the playground of emperors, now a majestic tourist attraction, the Forbidden City remains a legend in the hearts and souls of the Chinese people—and for curious souls like me, who are unable to resist the allure of seeing it firsthand.

At the city’s entrance, I was greeted by a giant oil painting of Mao Zedong—familiar to me from all the pictures I had seen. My friend told me that they commissioned a new painting every year, due to the damage caused by the weather. (No wonder Mao was looking so fresh for his age.)

The procession of colored umbrellas pulsed as tourists streamed through the open gates and into the palace. There we witnessed the beauty of red walls, grey cobblestone, and intricate gold detailing, replicated over and over on a massive scale. Aware of the historical significance of what we were seeing, we were inundated with an underlying sense of wonder.

Except for the light drizzle (or perhaps because of it), the air was clear that day, seemingly untouched by the pollution that had long ravished the city.

Taking full advantage of this, we embarked on a rather scenic hike through a mountain of greenery up to a little imperial outpost with a fantastic view. We stood within the shaded veranda and gazed out into the world, the summer breeze cool on our faces. Below us, the Forbidden City stretched on for miles, as far as the eye could see. 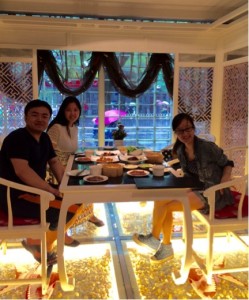 For lunch my friends invited me to eat Peking roast duck, a specialty in Beijing. We hopped into a cab and headed to the Kapok Restaurant (which was located inside of the swanky Kapok Hotel).

The restaurant had a high ceiling, atmospheric mood lighting, and walls that glittered with gold. The waiter led us through this ritzy establishment to a little alcove with glass floors backlit with LED lights, and huge bay windows that allowed us a premium glimpse into the city.

Before digging in, I watched as my friend demonstrated the proper way to eat. With a few expert flicks of her chopsticks, she dipped thin strands of celery in sweet and sour sauce, layered it with crispy slices of roast duck, and wrapped it all in a crepe—which she then handed to me.

I spent a few moments admiring her handiwork before devouring the thing. Many glorious crepes later, we ventured out into the cool, semi-acidic Beijing drizzle, sated, ready to shop. 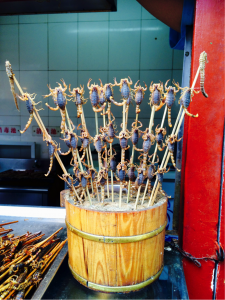 At the generous exchange rate of 6.2 Chinese RMB per dollar, one can practically hear the pockets of American tourists jangling with money. Where better to spend it than Beijing’s Oriental Plaza, the largest commercial shopping district in China?

Since I was the American tourist in question, that’s exactly where we headed.

Store after store sold cute Asian trinkets, snacks, and souvenirs that were clearly catered to foreigners, with prices duly inflated. Meanwhile, high-end brands lined the main streets for the urban elite, with luxury goods several times more expensive than they were in the states.

Turning into what looked like a back alley, we discovered the tourist treasure trove that is Wangfujing, a bustling street marketplace, which is a must-see for travelers, with vendors selling all manners of goods—from familiar, to exotic, to everything in between.

What caught my eye first, though, were the scorpions. That’s right; live scorpions wriggled on sticks next to their deep-fried brothers and sisters, followed by endless rows of skewered snakes, crickets, beetles, worms, tarantulas, centipedes and other small creatures that would maybe look tasty, if I were a bird.

My friends informed me that these crunchy delicacies weren’t the usual fare of natives, either, but were quite popular among camera-touting, novelty-seeking tourists in search of exotic new experiences…and profile pictures.

After staring at multiple clusters of fried bugs in morbid fascination, I finally purchased a more conservative skewer of candied fruits. I’m so glad that I’ve got my Southern sensibilities to keep me grounded in times of crisis.

Putting the “Neon” in “Nightlife” 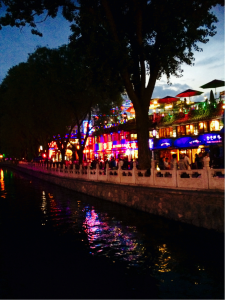 Next (and final) stop: HouHai, a riverfront nightlife district filled with funk, crammed with bars, and populated by tourists, ex-pats, and cocktail-sipping urbanites looking to unwind after a long day.

Probably inspired by the creatively skewered confections that we’d seen earlier today, my friend (who’s quite the foodie) recommended a local kebab place that was nearby. It didn’t take us long to polish off a tray of phenomenal spiced meat kebobs, for about the same price as your average fast food dinner in the states.

Afterwards we took a walk along the narrow cobblestone paths, ready to have some fun. Neon lights spilled into the evening streets, accentuated by the boom, boom of the live artists performing from the open-air bars. Dry ice unfurled onto the sidewalks, where promoters hustled to lure us into their respective establishments (each purportedly better than the last). The river glowed with life, Technicolor from the brightness of the boulevard, and when I closed my eyes against the world, I felt the pulse of the city beat in my fingertips, and I remembered how good it feels to be young.

We wandered into a random bar and smiled at each other like little kids in a candy shop. I realized that I couldn’t have asked for a better day, or better people to spend it with, in a city that I was falling in love with all over again.

Yehong Zhu ’18 loves the Beijing: the city, the nightlife, and especially the food.