I read an article on Longreads a while ago by a food critic who said that out of all the drool-worthy things she gets paid to eat and review, her favorite food is chicken tenders. It is no secret that I, too, love chicken tenders. The best ones you can get near me (the intersection of East Amherst and Williamsville in New York) are at the drive-in, where I can never park because I am a terrible parker. You can also get them at Dash’s Supermarkets, where they are $3 and come with three slices of dill pickle. I digress. The general gist is that the article made me think about how, in my friend Alexis’s words, “if a restaurant messes up chicken tenders, they’re going to mess up everything else too.”

However, I’m not very good at judging chicken tenders. So, this article is not about chicken tenders. Instead, I turned to my own favorite food, the chicken taco. The chicken taco, though just as ubiquitous in fast-food establishments, has many variations at every place you buy it. The chicken can be ground up, shredded, or cubed; it can be served with rice or without, with pico or with pineapple salsa, and so on.

So I embarked on a journey through the 716 to find the best chicken tacos in a week. I had a few requirements:

Since I was frequenting fast-food places, I went to a lot of chains that are probably familiar to people around the country (and in the case of Chipotle, the world). Here are the eight tacos I had, from worst to best.

Mighty Taco is basically the Taco Bell of Western New York. It’s the type of place that you would go for cheap inauthentic Mexican food after a late night. It is not Instagrammable the way In-n-Out is ironically Instagrammable. It’s not good quality food. But, it’s fast, and it’s local. I went with my friend Alexis on a Saturday night around midnight and dined in (for the complete experience). The only other people eating in were, to my left, a severely drunk blonde suburban housewife who looked like she was going to puke any second but kept dancing to the song playing and, to my right, two middle-aged average looking men. (Alexis says they were there because middle-aged people want to relive their youth, and her dad says that Mighty Taco was the place to be after a late night back when he was our age).

The taco was no-frills. I ordered the eponymous “Mighty Taco” with ground chicken, which came with lettuce, tomato, and cheese. Guac and sour cream were extra, and the total for my six-inch taco was $2.11. I received my taco in under five minutes, so I got what I came for: fast, cheap, and fake Mexican food.

I was pretty disgusted at the sight of the taco because who puts American cheese slices in a taco??? It was not even melty? It was very much a Monet. The tortilla itself was chewy and kept the taco together; there was very little spillage. 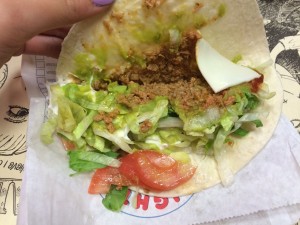 Surprisingly, the chicken was quite flavorful. However, it wasn’t good enough for me to finish the tiny little taco, and that’s saying a lot because one of these tacos was not nearly big enough to be a full meal (or even to satisfy the munchies). 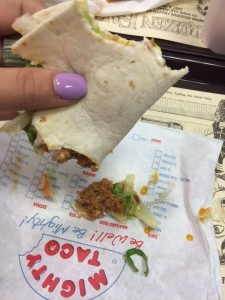 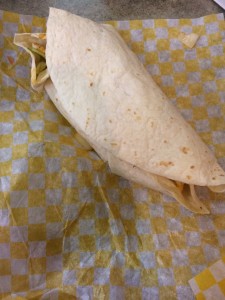 All I can say is that Jim’s should stick to fried stuff and not try to dabble in faux-Mexican. This place is not even worth a description. (0/10 – do not recommend.) 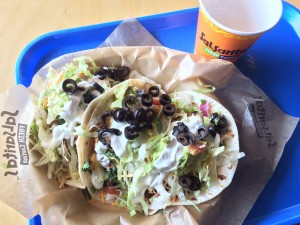 I knew it would be a no from me after just looking at their ingredients on the assembly line. Like Jim’s I really can’t go into detail here. Just. Not. Good.

I feel bad for Moe’s because it’s across the street from Chipotle. Chipotle doesn’t even feel threatened by Moe’s. It knows that people would always choose it over Moe’s,. except when you don’t want to see everyone you know from high school, which is why my friend Julie and I went to Moe’s after going to the gym. The only other people we saw that we recognized were also coming from the gym. This blog post has really screwed up my attempt at getting rid of the freshman fifteen but it’s okay because that was already a lost cause.

It was $7.26 for two “Overachiever” tacos ($3.63 per taco), which are two tacos with guac and sour cream. My tacos also included white rice, black beans, shredded cheddar cheese, tomatoes, lettuce, and black olives (don’t ask – I like olives). 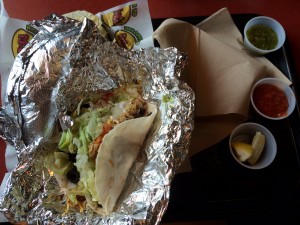 I can’t emphasize enough how much I love the free chips that are given to you as part of the order because they’re the perfect way to scoop up extra filling. The tacos were not very messy (even though the six inch tortillas looked a bit flimsy), and the tortillas did not get soggy. I added lime to my tacos, which really brought out the flavor in the guac (Moe’s offers one of my favorite guacs, even if it most likely not made on site).

Ultimately, they weren’t that pretty *looking* but were honestly exactly what I wanted after going to the gym. 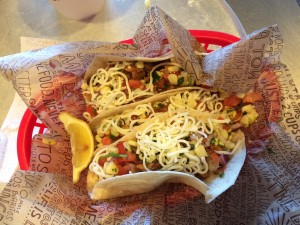 Because Chipotle is the Mecca for burritos, people often forget that Chipotle offers soft and hard-shell tacos as well. Long story short, turns out if you’re coming to Chipotle, the tacos aren’t worth it. Stick with a burrito. Next.

You must be really shocked that I even went to Taco Bell, let alone let it climb up this high on the list. Well, so am I. I initially didn’t want to go, but I wanted to hang out with my friend Jeff, and he’s the type who isn’t going to just chill without an agenda, so I asked him to go to Taco Bell. 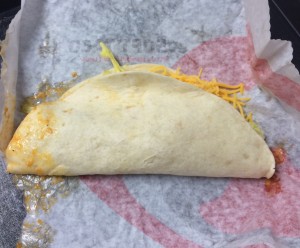 I feel like Taco Bell doesn’t get enough love. The taco I got was absolutely no frills: a shredded chicken taco, which came in a six inch tortilla that only included lettuce and shredded cheddar cheese. No tomato. No weird onions or olives. I added fire sauce for some flavor. 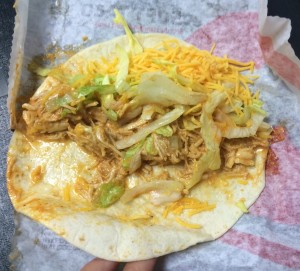 It was amazing. The shredded chicken was so tender and juicy that I almost got another one. The chicken alone is what brought the taco up here. There was no drippage in the eating of this taco, except for a couple stray cheese shreds, and the tortilla stayed intact, chewy, and dry throughout. It was the perfect late-night snack.

ETS, or Elmwood Taco and Sub, is another local Buffalo place but unlike Jim’s and Mighty Taco, it is on Elmwood Avenue downtown. Up until this post, I had never had a taco from ETS, just their cookies, which are huge and soft and chewy and basically a cookie-cake sans icing; they’re the size of your face and only $4. 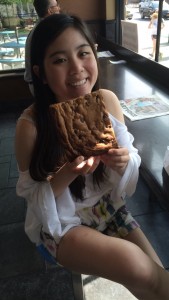 But back to tacos – I got a medium (six-inch) soft shell chicken taco at ETS for $3.10 and was expecting the worst. I was blown away at how amazing the cubed chicken tasted. The chicken itself was spicy, something the other tacos often lacked and made up for in salsa content. 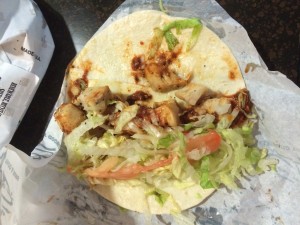 The taco came with lettuce and tomato, and I was surprised that there was no cheese. But I really liked the way the taco tasted without cheese – different, but good. On the downside, there was a lot of spillage… 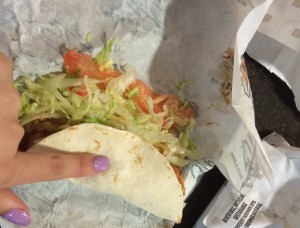 On the upside, ETS provided waffle fries to scoop up my fallen taco. 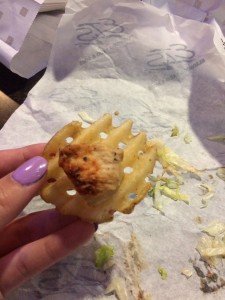 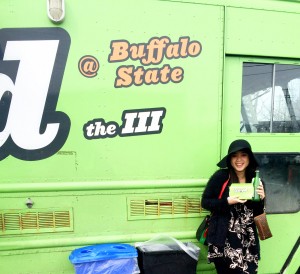 I knew Lloyd’s was going to win this quest before it even began. Lloyd’s Taco Truck is heaven on earth. My friends and I follow Lloyd’s on Twitter so we can go to it whenever it is within a fifteen-minute radius of us. Sometimes when we’re desperate and have the munchies, we’ll even drive downtown to get Lloyd’s at like one AM. Once, Lloyd’s even got featured on some TV contest show, and they won money to start a brick and mortar store. 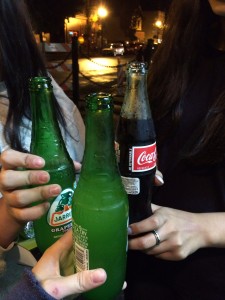 Lloyd’s has Mexican soda, which is the best soda.

Lyods is in a league of its own. The chicken tacos are wrapped in two tiny (I’m guessing four inch) corn tortillas, then stuffed with cheddar cheese, cabbage, chimi sauce, rojo sauce, dusted with cilantro, and served with a piece of lime that brings out the seasoning on the chicken pieces. A taco is $2.65, which is a bit pricey when you realize how small they are. However, the quality definitely makes up for the size. On the other hand, somehow these tiny things can get me full after eating just one. 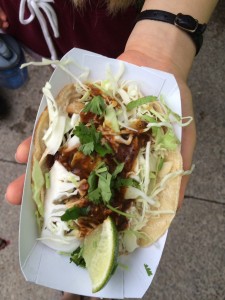 The only cons about these tacos are that

The chicken is juicy and has a lime-y flavor to it, and the cabbage is an interesting texture in the taco. The ingredients are top-notch, and the tacos probably make up a good 10% of my foodstagram posts. I am in love with Lloyd’s. They need to drive over to Boston. I would trade Bon Me with Lloy’s any day.

Everyone calls Buffalo the home of the chicken wing, but when I go home, I know I’ll be able to score a great chicken taco. This may not have been the best experiment scientifically, as I had some bias towards Lloyd’s and knew where each taco came from. However, I would definitely repeat the experiment again and can guarantee you that no matter what, the tacos from a truck will come up first.

Sally Yi (sallyyi@college.harvard.edu) loves to write and is pretty much a chicken taco expert.