Women’s Harvard Tennis finally plays outdoors at the end of their season. 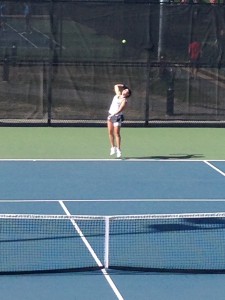 Spring has brought to Harvard not only daffodils, crocuses, and long lines at J.P. Lick’s, but also the opportunity to once again watch sporting events outdoors! I took full advantage of this opportunity this past weekend as I meandered over to the Berens Tennis Center to watch the women’s varsity tennis team take on Penn and Princeton. This was the first chance the team had had to actually play outdoors on its own courts and while the change was a challenge, it was invigorating.

On Saturday, the girls donned their visors and tied up their victory braids as the Penn players made their way to Harvard. The Crimson currently sits at 63rd this season with a current record of 7-8, 0-3 Ivy while the Quakers boast an 8-7, 1-3 Ivy current record. Despite taking an early lead in matches, Harvard fell to Penn 5-2. No. 3 doubles team June Lee ’17 and Amanda Lin ’16 triumphed 8-4 and No. 4 singles player Ellen Jang-Milsten ’18 conquered 7-6 (4), 6-1.

The next day, under a bright sun and strong winds, Harvard faced No. 53 Princeton. The tough match-up was well attended by some spirited fans and a few pesky Princeton parents. But as I attempted to stop my friend from chuckling at my explanation of duce court, Harvard once again fell 5-2 in a struggle that came down to the last couple matches. The wins against the Tigers came with No. 2 singles player Annika Ringblom ’18 at 6-2, 6-3 and No. 1 doubles team Monica Lin ’17 and Annika Ringblom at 8-6.  These losses though only inspire the team to play on with increased enthusiasm as they head into the end of the season!

And now, an interview with the lovely and talented June Lee!

CC:  Has the team changed over the course of the season?

JL: We’ve been doing a lot more fitness that can be applied to the court and a lot more on-court fitness. Our team has also become much more poised on the court and more energetic. One of our special strengths we have always had is that we never ever give up; we fight until the last ball. Our lineup has changed quite a bit from the beginning of the season due to injuries though, some worse than others, but hopefully everyone will be healthy soon!

CC: What did you learn from this weekend’s matches?

JL: I think this weekend really showed us that the other Ivies are just as tough as we are and fight just as hard, so we are going to have to pick up our level and really bring it to end the season on a good note.

CC: What does the team plan on doing to prepare for the upcoming matches — some of the final matches of the season?

JL: To prepare, everyone will probably be coming in for individual sessions with the coaches to tune up some technical things. We will definitely be going to see our trainer on a daily basis to take care of any injuries now and to hopefully prevent future ones for the last few matches. Hopefully we will be able to squeeze in some time for team bonding, like a fun activity or something we can all do together. We also just need to be resilient and stay positive and supportive in order to win the last few matches.

CC: How was it to finally play outside on your home courts?

JL: It was really interesting because we haven’t played outside in so long and didn’t really get a chance to practice outdoors, but yesterday when we played outside, it was very, very windy, so it was fun to find ways to deal with the wind and find ways to win points different ways because we weren’t always able to hit through the ball cleanly. Today’s conditions were much better, but I think being outside was good because it slows points down and we get to be in the sun (which is great considering how long the winters in Cambridge are).

CC: How do you feel about the relative audience etiquette?

JL: I love big crowds and when people are loud and cheer! It creates such a great atmosphere, and even when the opponent’s fans are cheering, it creates a very competitive environment that is awesome to play in.

Well, that will certainly be the case this Friday as Yale comes to town! After Friday, the women play Brown on April 19th away and Dartmouth on April 25th at home before the NCAA championships. Let us hope that the New England weather continues to grace us with sunshine and sufficient warmth for the women’s tennis team to bask in the glory of their upcoming victory against the no. 75 Bulldogs!