Harvard Students participate in the ‘Fight for 15’ Movement 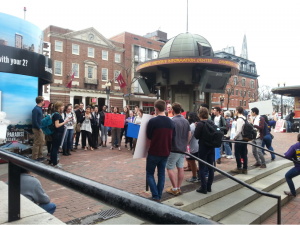 April 14th marked the Justice and Labor Day of Harvard’s Heat Week, a week otherwise devoted to rallying for Harvard’s divestment from fossil fuels. The rally for economic justice for workers has capitalized on large concentrations of college students in major cities. Over 100 college students from Harvard alone committed to participate in the ‘Fight for $15’ protest. The Facebook event for the April 14th demonstration boasted over 1000 RSVPs and was supported by over 60 organizations from the greater-Boston area along with ten Harvard-affiliated student groups. The citywide rally began at 4 pm in Forsyth Park in Boston.

The ‘Fight for $15’ campaign began in 2012 with a few dozen New York fast-food workers but has quickly spread to 150 cities and 33 countries. The campaign has also grown to encompass low-wage laborers as a whole and joins together the many affected groups to take a stand against economic injustices. The goal of the event is to raise awareness for the large population of low-wage workers and the mistreatment faced by them within the workplace.

Following the lead of other major cities staging similar demonstrations, Boston’s ‘Fight for $15’ rallied for an increase in the minimum wage to $15/hour in Massachusetts. The collaboration of various groups with disparate personal goals coming together to form a single large group with a single, focused goal created a solidarity that demands to be recognized. With participants ranging from college students to laborers themselves, ‘Fight for $15’ has started to create a discussion about the issues faced by low-wage workers.

Pedestrians gathered to learn more about the rally as a group of over 20 to 30 Harvard students chanted outside the Harvard Square T station. Many bystanders borrowed posters from the group in order to get involved in the demonstration themselves.

A Harvard-employed worker spoke to the crowd about how thankful she had been for a union, but that she had still faced backlash for different work violations that would have impaired her ability to carry out her job. Students gave speeches about why they were passionate about labor reform and spoke about their own experiences that led them to participate in the rally. Many students spoke on behalf of the broad group of low-wage laborers who struggled to afford rent, food and other amenities with their current wages. The speakers touched on how important it is to get college students involved in the rally; to have them understand their privilege and channel it to help catalyze change for those in need.

The need for a $15 minimum wage arises from several factors including a high cost of living, labor abuses that workers face in the workplace, and the lack of support from employers. However, the ‘Fight for $15’ campaign organized in Boston barely scratched the surface in addressing new standards needed to complement an increased minimum wage.

Many injustices follow being a low-wage worker. ‘Fight for $15’ seeks to address the harmful environments that workers often find themselves in; having only an increased minimum wage will not bring about workplace equality. The dynamics of labor are far more complex. We need policies that indemnify laborers from workplace danger, like injuries received from lifting heavy furniture or burns received while preparing food. Raising the minimum wage first requires putting in place supportive measures that prevent the system from reducing current labor employment, or from worsening working conditions to make up for the fall in profit.

The Harvard-employed worker explained that having “a union [meant] safety.” However, the first step towards forming a union means working and merging with other groups seeking justice. This new standard for a living wage wouldn’t last long without a union. The students attending the rally spoke about their prior involvement in campus activism separate from ‘Fight for $15’ and how they had gotten involved in ‘Fight for $15’ because of the intersectional ties that environmental, women’s, people of color, immigrant and LBGTQ activism has with the labor rights movement.Climate activist and Harvard alumnae Bill McKibben spoke of the need for groups to form an allied campaign for change. His own experiences had convinced him of the importance of a living wage as a right and not a privilege.

The campaign hopes to bring attention to economic justice and persuade big companies, such as McDonald’s (which currently faces legal matters concerning a raise in the minimum wage for their workers) to adopt a living wage for their employees. If big businesses were to model themselves in such a way, other companies would follow suit and change could start to happen at all levels. It would be hard for a universal living wage argument to die down then.

Hunter Richards ‘18 (hrichards@college.harvard.edu) cares about living wage being a human right, not a privilege.