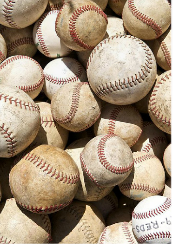 This week not only brought warmer weather to all the winter-worn Cantabrigians, but also the home opening games for the Harvard women’s softball team. Nothing says spring is here like the crack of a bat or the calls of an angry ump!  Whose childhood is complete without Saturdays at the ballpark? All those clumsy swings at t-ball while your dad shouted encouragement were finally worth it when the whole team went out for ice cream. Well, these were the images conjured up in my mind as I watched our Crimson women defeat the University of Rhode Island on Tuesday afternoon in not one, but two clear victories. So while the weather may still be questionable, the strength of this year’ team is not.

This past weekend the team opened Ivy League play by traveling to Columbia and Penn. In game one against Columbia, Harvard won 3-2. However, Columbia came back in the second game to win 3-0. On Sunday, the Crimson lost to Penn in two high scoring games, one of which was 8 innings long with a final score of 15-14. But the team did not allow any of these losses to distract them from preparing for and focusing in the games this week.

Thus Harvard came into Tuesday’s game with an overall record of 8-15. Rhode Island came with an overall record of 1-18. Their one victory is from the March 16th match up against Lafayette. The team has lost six games since that win, and all in five innings. Harvard was also able to defeat Rhode Island within five innings in both games. The series was a particularly successful one as the Crimson were able to amass 29 runs off of 25 hits.

In the first game against the University of Rhode Island Rams that began at 3:00 pm at Soldiers Field, the Crimson came out strong and excelled in offense. Shortstop Emily Gusse ’15 hit two homeruns! Neither pitchers of the first game, Laura Ricciardone ’15 and Morgan Groom ’16, allowed a single walk. In the bottom of the first inning Harvard scored nine runs and took complete control of the game from then on. The final score of the first game was 15-0 and is the team’s third shutout of the season (so far).

The second game of the doubleheader began with the Harvard team down by one. But the team quickly got back into gear and rebounded with Gusse, Catherine Callaway ’17 and Giana Panariello ’17 bringing in a total of seven runs. Crimson continued with that determination to come to a total of 11 runs in the bottom of the second. In the third inning, Gusse hit one over the left center wall with Andrea Del Conte ’15 and Panariello on base to make three more runs and knock Harvard’s total up to 14. Rhode Island did their best to leave it all on the field despite the heavy deficit. They scored two runs in the top of the fifth but it was not enough to soften the defeat of 14-3.

Harvard will play again at their home field this Friday. The game against visiting Cornell will begin at 2:00 pm. The current record for the Crimson is now 10-15. Cornell’s current record is 8-10.  They are coming off of a three game winning streak in this week alone.  Cornell plays George Washington University in D.C. before coming to Cambridge to take on the Crimson women. The weather promises to be warm but threatens rain.

Caroline Cronin ’18 (ccronin01@college.harvard.edu) hopes to cheer on the softball team in the games to come!