Everything you need to know to sound informed about the Divestment movement at Harvard. 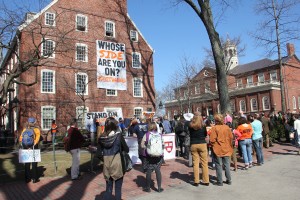 What is the aim of Divest Harvard?

Who chooses whether or not to divest?

The Harvard Corporation, also called the President and Fellows of Harvard College.

The Harvard Corporation is made up of 13 total members: the President of Harvard University (Drew Faust) and 12 other members who are generally well accomplished alumni.

Have there been previous divestment efforts at Harvard?

Yes, several efforts have indeed been made to promote such divestment efforts.

1980 – 1990: The Radcliffe Board of Trustees (Radcliffe had a separate endowment then) voted to make investments only in South African companies that had signed the Sullivan Principles (Corporate codes of conduct for South African companies which aimed to fight Apartheid). Harvard, on the other hand, only chose ‘selective’ disinvestment. The basis or criteria for such a disinvestment were never made clear. Both policies were undertaken as a response to student activism and mounting national pressure. Harvard was one of the few universities that did not undertake complete divestment.

1998: The Harvard Corporation divests from companies engaged in the manufacture of tobacco products.

2002: 65 Harvard faculty members (including two House masters) signed a petition that demanded divestment from all companies that did business in Israel. The Harvard Corporation did not take up the petition.

2006: Harvard divested from PetroChina and SinoPec, companies linked to genocide in Darfur, Sudan. (The divestment was undertaken as a response to student activism).

Why does the Harvard Corporation disagree with Divest Harvard?

1) Investment in fossil fuel companies, according to President Drew Faust, gives us high investment returns, and gives us more money to spend on University activities and academic missions. According to the President, the primary mission of the endowment is support academics and research.

2) A University should be politically neutral. According to the President, divestment would give the impression that Harvard is taking political sides.

What are Divest Harvard’s primary arguments for divestment?

1) Political efforts have been blocked by powerful fossil-fuel lobbies, so the divestment movement hopes to target the source of political inaction though fossil fuel divestment by mounting public pressure on these companies.

2) Divestment breaks free market myth, shows the coercive tactics of the fossil fuel industry, and how these companies create self-perpetuating demand for product by blocking legal and cultural change.

3) Finally, it would get educational institutions like Harvard to uphold the intellectual consistency they preach in the classroom. How can Harvard create green campuses when they invest in companies that cause climate change?

Aditya Agrawal ’17 (aagrawal@college.harvard.edu) hopes that you are now better informed on the matter.