A photo essay by CAROLINE SILBER. 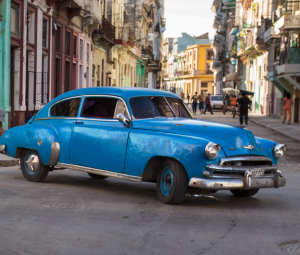 What will become of the cars? In the land-that-time-forgot that is Cuba today, most cars are either American behemoths from the fifties or tiny Russian Ladas from the seventies. The Lada would almost fit in the trunk of a ’57 Chevy.

You may have seen them in pictures but until you visit you do not realize what an integral and prevalent part of the Cuban landscape the cars are.

Owners baby their cars. They work on them daily (in Cuba, everyone is a part-time mechanic). They cringe if you thoughtlessly slam the door as you exit, as though feeling the vehicle’s pain.

Now that Cuba and the U.S. are normalizing relations, what will become of those classic DeSotos, Studebakers, Ford Fairlanes and Coup de Villes? Will they, in a concession to practicality, find themselves mothballed in favor of the modern Chinese models already prowling Havana’s narrow streets?

And for that matter, what will become of the buildings, the stately and ornate ruins any one of which is likely to be home to a dozen families, an upscale paladar, a small produce shop, a nail salon,or one of countless other small private businesses currently thriving alongside the state economy? I was told that in Havana on average three buildings collapse every day. Whether or not this is verifiable, it is clear that the old buildings are desperately in need of the same tender care bestowed upon the cars. Or will they over time be torn down and replaced by new, uncrumbling, economical, but soulless, modern towers?

In short, what will become of Havana?

To hope for no change is to wish continued hardship upon a citizenry that endured difficult times as a Soviet client state and then needed a new term – “the special period” – to describe the even harsher times once the Soviets left.

But to think about Cuba modernizing – fueled by U.S. economic investment – is itself unimaginable and profoundly worrying. (An American I spoke with, on his first visit to Havana, said he had booked his trip now in order to “get there before McDonalds.”) It is difficult enough for a wealthy nation, one in which change occurs gradually over decades, to preserve its history, its sense of self. What the hurricane of change about to be visited on Cuba will mean for the Cuba I have known only briefly, I cannot imagine.

I was fortunate to visit Cuba two years ago, and then again shortly after the historic announcement of normalizing U.S.-Cuba relations. I felt I was witnessing a unique, twilight moment – between the sunset of the old order and the dawn of the new. I am not qualified to predict what will happen to the cars, the buildings or the people. All I can do is show you what I saw.