One Hamlet to rule them all. 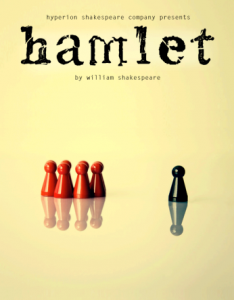 My boyfriend was in town, and knowing that he is a big fan of Shakespeare’s Hamlet, I knew I had to take him to the Hyperion Shakespeare Company’s performance of Hamlet Saturday night. We were on a double date with Dean Khurana and his wife, Stephanie, if you count sitting on opposite sides of the same section to be intimate enough that it constitutes a double date (in my mind it does). I had no idea what was going to happen during the show, which I understood was going to be a completely different production of the play. I was thoroughly confused the first time Hamlet appeared because Julianna Sass ’17, who is also cast as Ophelia in the program, plays him.

I quickly realized that this would be the form of the play, as it was evident from the director’s note that this version of Hamlet was going to be different. Not Romeo + Juliet guns and aquarium different, but a radical take on the play. The note reads that in the famous scene where Hamlet is dying, his best friend Horatio wants to commit suicide to die alongside him. However, Hamlet “stops him and begs him to live on to tell his story.” The director, Lelaina Vogel ’15, writes that Horatio has felt that in the countless productions of Hamlet since Hamlet’s death, his friend’s wish has never been quite fulfilled because he is in this endless cycle where Horatio is told again and again to tell his story. For this production, Horatio retells Hamlet’s narrative in a new form in which the entire cast plays Hamlet at some point in order to break the cycle and tell the story right. Horatio is thus seen as an audience member sitting in the intimate theater furiously writing in his notebook between scenes, as a director gesturing wildly at cast members, and even as an actor giving Hamlet’s famous “to be, or not to be” speech.

Though the acting was phenomenal and brought out the comic facets of the play that often get forgotten, what struck me most was the family dynamics of Ophelia, Laertes, and Polonius. The first scene with Laertes warning Ophelia to be careful around Hamlet seemed laden with sexual tension, which was not relieved when the actor who played Laertes played Hamlet in the “Get Thee to a Nunnery” scene. (This is coming from a person who finds the Folger’s coffee ad to have sexual tension, so take my words with a grain of salt.)

Polonius was the shining star of the play, with his dedication to his character shown via his attention to geriatric mannerisms. Jamie Herring ’18 either had been around a lot of overly coddling, obnoxiously, verbose old men in his life or is a sixty-year-old man at heart. Watching him alone made my night.

The music in the production was amazing, particularly during transitions and especially in the scenes with the ghost of elder Hamlet. Hamlet’s ghost (albeit wearing a fencing costume, as my friend pointed out) was somehow believably creepy. His freaky limping and hair-covered face were downright eerie. It was honestly quite disturbing watching him come out of the audience and walk onto the stage.

However, the one scene that really stuck out to me was when Hamlet has the play staged, which is reminiscent of what Claudius had done to elder Hamlet. The cast performed the play to ragtime music, adding a humorous quality and giving a quick run-through of the plot before adding dialogue.

The costuming in the production was an interesting blend of sartorial choices. The combination of Gertrude’s velvet long-sleeved green dress and long red hair with Claudius’s long brown hair was reminiscent of Shrek and Fiona as noticed by some people sitting behind me. I don’t know if Shrek ever came under heat for putting poison in anyone’s ears, though.

Though at times I felt that Horatio was meddling a lot with the flow of transformations from Hamlet to Hamlet, I thought that the setup of the play, with Hamlet’s lines being read by different characters, to be really interesting and engaging for the audience. The premise itself was something that I had never put much thought into before, and the execution allowed for a lot of laughs (more than one would expect in a tragedy). If I could choose between this production and reading Hamlet in bed during high school while procrastinating on my calculus homework, I would choose this every time (but really, this was an amazing production, and I’m sorry that there are no more shows that you can go to after reading this article).