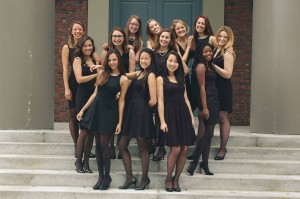 In 1975, Kathy Manning ’78 and Diane Nabatoff  ’78 came together alongside a few members of the Krokodiloes to hold auditions for a musical group that would give female voices a space on Harvard’s campus. Forty years later, the Radcliffe Pitches are still belting out jazz classics and dazzling audiences from Harvard to China to Mexico to Bermuda. This Saturday at 8 PM in Sanders Theatre, Harvard’s oldest all female a cappella group invites everyone to celebrate their legacy at their “Fabulous 40” 40th anniversary concert.

Pitches president Jenny Chang ’16 says, “Preparing for the 40th Anniversary jam has been a lot of hard work, and I am really proud of how far we’ve come in these past few months.” Stage manager Katie Wu ’17 adds, “Everyone’s really involved, and I am excited to help in the process.” On what it’s like to be a part of the Pitches’ 40th Anniversary, Wu says, “The most fun part has been talking with alumnae and collecting memories.”

She recalls finding a photo of the 1981 Pitches singing to former Hasty Pudding Man of the Year Robert Redford. Emily Zoffer ’17, another member of the Pitches, says “Something I thought was really cool was looking at an old arrangement from 1983 that had a note on the back to future Pitches.” For Chang, the history she discovered had a personal tie. “Kathy [one of the founders] recounts the exhilaration of performing in Sanders for the first time and that the very first song the Pitches ever sang in Sanders was ‘Lullaby of Broadway’, which also happens to be the very first song I sang in Sanders after joining the group in the fall of 2012.”

In addition to being one of the oldest a cappella groups on campus, the Pitches also distinguish themselves with their unique jazz sound. Chang says, “We specialize in jazz and American standards, which is a genre that is different from most other a cappella groups on campus.” Their repertoire includes artists like the Andrews Sisters, Ella Fitzgerald, and Frank Sinatra. Some of the jazz standards to look out for during the anniversary jam are “You’d Be Surprised,” “Mr. Sandman,” and “Boogie Woogie Bugle Boy.”

Wu, who also joined her freshman year, saw that a cappella was a big deal on campus and wanted to join a group. She was drawn to how the “Pitches tied history and tradition” alongside jazz music. Thinking back to the founding of the Pitches, Wu says that the creation of an all female a cappella group was a “unique opportunity for women in 1975.” Chang adds, “To this day, we strive to create a community of supportive and strong women who share a common love for music.”

Zoffer chose the Pitches because of their ‘block sound’ where the backup vocalists harmonize behind the soloist. “We really emphasize blending, vowels, cutoffs, and having a clean sound,” explains Zoffer. She also says, “So many girls are knowledgeable about jazz and can arrange it.”

Other Pitches traditions include singing to the Hasty Pudding’s Man of the Year. This tradition takes root in the Pitches being founded out of the Hasty Pudding Society. “When we perform our song ‘You’d Be Surprised,’ we sing to one man in our audience. The soloist brings him up and dances with him. Every year one Pitch has the honor of serenading the Man of the Year,” states Zoffer. This past February the Pitches had the opportunity to croon to Chris Pratt.

Additionally, the Pitches are known for their annual spring break trip to Bermuda. Not only do the members get to bond on the beach, but they also have several concerts lined up during their trip. “One thing I totally love and that has become more special is connecting with people through music. A favorite moment is watching people’s faces as you sing a song and they recognize it even with a new arrangement,” says Wu of an audience the group performed for in Bermuda.

The “Fabulous 40” jam is another opportunity for the Pitches to not only connect alumnae to current members, but to also share the legacy and memories with a larger audience. “I can’t emphasize how cool it is to be apart of group with so much special history,” says Wu of her role in helping to put on this concert. She is hoping that the founding members enjoy seeing how their work has come into fruition over the years.

In preparing for the concert, Wu said that the Pitches are incorporating a skit between musical numbers. “As I am writing it, I have to be aware of our audience—alums, other student groups, etc.,” she says of deciding which Pitches references to include. There may or not be references to the film Pitch Perfect in the skit. Wu hopes that the skit will show the “living and breathing—singing, I guess—history of the Pitches.”

While the love of singing is the reason why so many women join the Radcliffe Pitches, members, undergraduates and alumnae alike remain bonded to the singing group because of the community. The tradition of sisterhood and solidarity is one that is woven through forty years of auditions, rehearsals, and jams. “We are friends in addition to being in the same group. We start every rehearsal with a new and a good. This allows each girl to support and check-in with each other,” says Zoffer of an unseen Pitch tradition.

Though the concert this Saturday is meant to celebrate the forty fabulous years of the Radcliffe Pitches’ existence, it also is a celebration of a continuing legacy. Zoffer sums up the Pitches nicely with, “We’re more than pearls and dresses. We love and support each other; we’re goofy and fun. Most importantly, we love singing together.”

Shaquilla Harrigan ’16 (sharrigan01@college.harvard.edu) thinks the Radcliffe Pitches should have a cameo in Pitch Perfect 2.