Is no weather good weather? 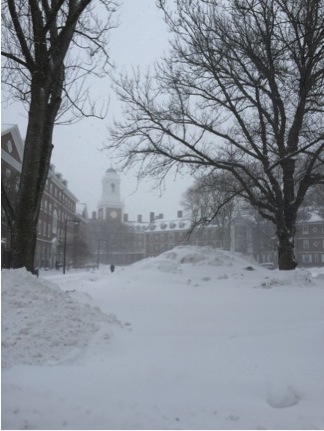 Last Tuesday, Juno brought me my first ever snow day.

Some people were worried about the blizzard wreaking havoc, but I had no such qualms. No class? No homework? No obligations to speak of? As far as I could tell, I had no choice but to stay inside with my friends, eat food, watch TV, and I couldn’t have been happier.

This day was like a holiday, but better. Holidays are planned, and something always comes up that takes up your time. Something about the spontaneity of this snow day, the fact that I hadn’t seen it coming and the fact that all Harvard students (notorious planners) were forced to give up any attempt at scheduling, made me feel spectacular. I could do anything. Sit in bed and watch TV? Make hot chocolate and talk with my roomies? Get drunk and have a snowball fight? I couldn’t believe I’d never experienced this as a kid. I thought I was lucky to have nice weather, but what had I been missing out on?

When I tell people I’m from Los Angeles, the first thing they ask me is, which famous people have you met? The second thing is isn’t the weather amazing? To the former question, my response was generally pretty uninteresting. I don’t care that much about celebrities, (I once confused Dennis Quaid with a family friend because I thought he looked “familiar”), so even if I have met them, I wouldn’t know it. But until recently, I actually agreed with them about on the latter point; I’d nod enthusiastically, and begin my usual tirade about how superior our weather on the West Coast is, and how it really affects the culture and emotional well-being of everyone blah blah blah. Now though, I’m not so sure.

Growing up in Los Angeles, it wasn’t just that snow days were nonexistent; weather itself was nonexistent. I never once opened the weather app on my phone until I moved to Cambridge. There was no point. Every single day is a balmy 60 degrees, slightly overcast in the morning, but sunny by about 12pm. It’s big news when temperatures drop below 50, and in that case I’d rather just brave the storm.

Obviously, on the one hand, never experiencing real weather is a blessing. We wore shorts year round, went to the beach in February, and never worried about snowy road closures or other inconveniences. And I’ll admit, it was nice that the only time I had to worry about warm clothing was when I needed a sweater in air conditioned movie theaters.
On the other hand though, part of me feels like I missed out on a huge part of growing up.

Nice weather isn’t just nice; it’s consistent; it’s mundane to the point of being boring. To some extent, lack of weather gives Los Angeles lack of character and a lack of urgency. Imagine never watching the seasons change; no colorful falls, snowy winters, or a boiling summers. We are all laid back and relaxed; there’s always time to do everything tomorrow. We can always go surfing, always go swimming, always ride our bikes or go on walks, and so, consequently, we never do.

On my first snow day last week, as I watched kids frolic in the snow, sit by the fire in the common room, and throw blizzard day-gers in their cramped dorms, I suddenly realized that my childhood of perfect weather wasn’t a blessing. It was a curse.

So tomorrow, when you trudge through the three-plus feet of snow outside on the way to class, when your fingers get so cold that you can’t type on your iPhone (God forbid!), and Juno has all but ruined your shopping schedule and thus jeopardized your entire future, just take my advice and remember that maybe, just maybe, bad weather is better than no weather, and freezing your legs off is better than having to shave them every day.

Eloise Lynton ’17 (eloiselynton@college.harvard.edu) is hoping for another snow day.