Squash comes to the end of their season. 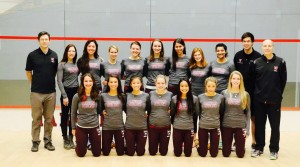 The squash team this year has had quite the season. Both teams, the men and women, worked terribly hard and saw their fair share of ups and downs. A few upsets, one or two disappointing losses, and a team trip to the Cayman Islands brought the players together and better equipped to handle the challenges as a team. And so with the never-ending snow comes the College Squash Association (CSA) team Nationals this weekend. The women will be hosting the competition at our very own home courts starting Friday with play continuing through Sunday. The team will play one match a day until a champion is decided! The men’s team will travel to Trinity for their Nationals the following weekend.

This past week, both teams took home a few decisive victories. Both the men and women hosted the No. 5 seated Yale on Friday and came away with a shutout for the women and a clean 7-2 win for the men. This was the sixth straight triumph for the women and the win for the men secured at least a share of the Ivy League title. Then, over the weekend the players took to the road to challenge Brown, whose women are seated No. 11 and men No. 16. Both teams won 9-0 and the men celebrated the well-deserved 40th Ivy League title! The men and women are now seated No. 3 as they close their regular seasons.

This year the women came in second for the Ivy League. They lost only to Penn of the Ancient Eight. While it disappointed their hope of winning the most coveted all-Ivy title, they quickly turned to prepare for Nationals. Looking back on this 2014-2015 season freshmen Alyssa Mehta states, “I thought we became a lot more consistent towards the end of the season. We tried to prepare for all of our matches in a similar way–which helped us throughout. Everyone got better at hustled and fought for every point. We swept Columbia, Cornell, and Yale 9-0 and we upset the number 1 team in the country, Trinity, 8-1.” Yes, that upset was one of the highlights of the season and a match that both teams look forward to every year.

One other important season highlight that the Harvard women have to be proud of is the recognition of their very own Amanda Sobhy ’15. She is one of the three finalists for the prestigious Richey Award and has been undefeated in her collegiate play. The other two finalists are Danielle Letourneau of Cornell and Ashley Tidman of Trinity. Amanda has represented Harvard well and made her team proud whatever the final decision may be.

The men also have to face the No. 1 seated Trinity this week before they can take on Nationals. The match had been postponed from January 28th and will not be further delayed by the weather. Even during the snow and chaos, Trinity will be trekking to the Murr Center on Tuesday at 4pm. Three Crimson players hope to perfect an undefeated season. Senior Tyler Olson proudly holds the team best 9-0 while freshmen David Ryan and Seif Eleinen hold 5-0 and 4-0, respectively. The home court advantage and the rest that these snow days have afforded them will, we hope, give the men the power to defeat the Bantams (which are, apparently, some breed of poultry). After the Trinity match, the men will have a week off to prepare for Nationals at Trinity February 20-22.

As the squash teams take to Nationals, Mehta confidently declares, “We are looking forward to Nationals at our home courts. Our team has become really close this year so we are going for it and have nothing to lose –we will play the best we can.” Well, best of luck to you men and women of Harvard!

Caroline Cronin ’18 (ccronin01@college.harvard.edu) will be cheering the teams on this weekend at the Murr Center!