Without McNally, the Crimson struggle to keep Union off the scoreboard. 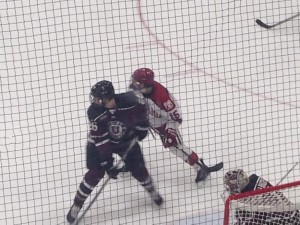 By the looks of the game on paper, Harvard should have easily beaten Union last Friday night. Union, the defending national champion, has had a down year by their standards, as they came into the game unranked and sitting almost at the bottom of the ECAC standings. Harvard is in the midst of one of its best seasons in recent memory and came into the game second in the conference and fourth in the country. However, as the old saying goes, “the game is not played on paper.”

The “paper” though should have relayed one important note: Harvard would be without defenseman Patrick McNally ’15. McNally injured his leg days only days before in a game against Cornell and is out for the rest of the regular season. McNally was the Crimson’s top defenseman, and his absence thrust multiple freshmen and sophomores onto the ice in much larger roles than they had faced all season. That would prove to be fateful.
Union, led by Daniel Ciampini ’15, who entered the game leading the country in both goals and points controlled the opening faceoff. Off the faceoff, Union overloaded the weak side and scored twenty seconds into the game. The game continued with Union controlling until Harvard was able to clear its lines with just over seventeen minutes left in the first period. Off a faceoff in the Union zone, the Crimson threw the puck in front of the net, and Kyle Criscuolo ’16 was perfectly positioned to slot it home and even the game.

After a brief delay to fix the boards five minutes into the game, the momentum swung back to Union, who were continually able to put the puck in dangerous positions in front of the Crimson net. If not for multiple stretch saves and composed handling by goaltender Steve Michalek ’15, the Crimson could have found themselves down further. As it was, the first period ended tied at one.

Just a minute into the second period, freshman Jake Horton was able to carry the puck behind the net, fake to one side, and with the Union goalie off balance wrap around to sneak the puck into the net. However, the lead would not last long. With the puck again in front of the net after a Union shot, Union quickly tied the game, and then two minutes later went ahead. However, Harvard again struck back when Jimmy Vesey ’16 skated through two Union defenders and calmly went top-shelf to beat the Union net-minder. The second period, though, would not end quietly. Just after the halfway point of the period, Union again put bodies in front of Harvard’s Michalek, and Union’s Ciampini scored his second of the night to put the Dutchmen up four to three.

Harvard avoided disaster with seven minutes left in the second period. On what looked to be an attempted goaltender change, a Union clear ended up bounding off the post keeping the Crimson down by only one. The Crimson had multiple opportunities, including a power play, fall by the wayside within the last seven minutes of the period and ended the period down one.

Throughout the second period, Union cleverly changed lines to allow their top line to skate against Harvard’s third line. The strategy paid off as Harvard’s third line gave up two of the Dutchmen’s three goals. The third line of the defense was particularly young with two freshmen in the absence of McNally, and the inexperience and lack of size showed. Harvard surrendered all three goals in the second period directly in front of the net. Just as it is in basketball, the team that controls the area around the net in hockey has a distinct advantage. That advantage was never more evident than the second period, and the loss of McNally was really felt.

To begin the third, both teams traded penalties. Neither team though could capitalize on its man advantage. The game remained relatively even without any major chances until just under eight minutes left in the game when Union’s center Mike Vecchione ’17 took a perfect pass from Ciampini and fired the puck into the side netting to put the Dutchmen up by two.

Harvard was not done however. With ninety seconds remaining, Harvard pulled the goaltender Michalek to add another attacker to the ice. It paid off in spades as sophomore Victor Newell scored to pull the Crimson within one. Despite furious attacks in the last forty seconds though, the Crimson fell five to four to Union.

After a torrid pace to begin the season, Harvard has now dropped two of its last three in the ECAC and has fallen to third in the standings. McNally believes he can be back for the playoffs, but the Crimson’s back line will have to grow up fast to get the Crimson back to winning.