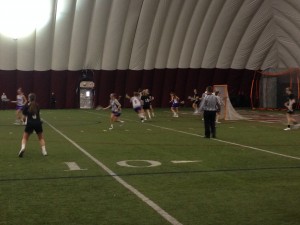 As the snow continues to fall and the wind blows ceaselessly, the majestic bubble looms unmoved in Soldiers Field Stadium. It is there that the Harvard Lacrosse teams have been drilling, scrimmaging, and conditioning to prepare for their highly anticipated upcoming seasons. As this shortened week comes to a close, the season opening games draw near. The women will kick off their season first this Saturday by challenging Hofstra at noon under the bubble. The men’s lacrosse team will be playing immediately after and taking on University of Massachusetts at 3pm.

Coach Lisa Miller, who is in her eighth season here in Cambridge, leads the women. Juniors Audrey Todd, Tory Waldstein, and Kelly Weiss captain the team. Todd and attacker Marisa Romeo ’17 were both named to Inside Lacrosse Pre-season All-American team this December and are expected to once again lead the team on the field. Last season the team came out with a 9-7 overall record and 4-3 in the Ivy League, earning a position in the Ivy tournament semifinals. The team has nine newcomers who hope to help the team improve their record this 2015 season on the road to greatness!

One of the many ways the women’s team has been preparing for this season is through scrimmages against other college teams. The most recent one was against the University of Albany this past Saturday. Freshman midfielder Hailey Novis admits that the scrimmage made the team realize that “there are definitely areas we need to work on” but that these issues are all fixable and working on them will allow the team to “come out strong.” As the team looks forward to the season ahead, Novis states, “I think we have a really fast team, so it should be exciting to see what we can do with that.”

The University of Hofstra women just beat University of New Hampshire on Valentine’s Day 15-11. Hofstra went on to face Fairfield on Tuesday, coming away with a 9-5 win. Harvard will have to start strong in order to compete with the team that’s already on a roll! After facing Hofstra this weekend the team will head south for a break from this never ending winter to take on Virginia on March 3.

The men’s team has been subject to some very high expectations for this season. The Crimson are named 12th in Cascade/Maeverick Preseason Poll and 11th in the USILA Preseason Coaches Poll. As exciting as that was, the best honor of all was the naming of the men as the top Division I team in the region by the Preseason New England Intercollegiate Lacrosse Association (NEILA) Poll. These high expectations are not new to many of the players though! Bobby Duvnjak ’16, Devin Dwyer ’16, Brian Fischer ’15, Stephen Jahelka ’16 and Sean Mahon ’16 were all named to the Preseason All-NEILA first team this year and will no doubt surpass all these expectations in the games to come.

The men earned these rankings in a wonderful winning season last year. The team came out 10-7 overall and 5-1 in the Ivy League, earning their share of the Ivy League title. That record tied the program’s best for conference victories—maybe they will top it this year! The championship last year also gave them a spot in an NCAA tournament post-season. UMass is coming off a 20-8 loss to No. 6 North Carolina this past Saturday. The Minutemen’s season opener was also a loss to No. 20 Army 12-7. It looks as it the Crimson men will have the confidence and skill to take on UMass and emerge triumphant!

The bubble will certainly see a lot of action this weekend in these anticipated season openers!

Caroline C. Cronin ’18 (ccronin01@college.harvard.edu) will be crowding that sideline this weekend to cheer on the Crimson as they begin their competitive seasons!