An interview with Georgia Stirtz. 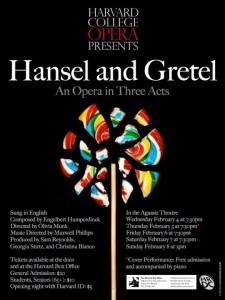 This past Sunday, many of you may have spent the majority of the day in bed, shielding yourself from the harsh winter weather by hibernating beneath your comforters. I, however, acting as the developed Harvard intellectual that I consider myself to be, decided to go to the Opera. If, at first, this seems unlikely, consider these facts: firstly, the opera in question was a rendition of Hansel and Gretel, only the best fairy tale known to man, secondly, it was rumored that there were free insomnia cookies at said event, and, finally, this particular opera was co-produced by Georgia Stirtz ’17, an incredibly talented producer and my very own block-mate.
Although I would never have thought to go to an opera at first, I was blown away by the production. The show, which was directed by Olivia Munk ’16 and co-produced by Georgia, Sam Reynolds ’16, and Christina Bianco ’17, was spectacular. The set design was impeccable, the musicians were incredibly talented, and, most amazing of all, every one could really sing. I was a bit taken aback that my own roommate had been so involved in something that I knew nothing about so I decided to sit down with her and ask a couple of questions.

Eloise Lynton (EL): Just to start off, for those of use who don’t know, what does a producer actually do?
Georgia Stirtz (GS): The producer keeps everyone down to earth and figures out what is realistic and achievable. The director is the one who works with the actors and has the artistic vision. As producers, we do the practical stuff: the budget, the venues, the publicity, and all the odds and ends in between.

EL: Sounds like a lot of responsibility! When did you first get started producing?
GS: Sophomore year of high school was the first time I helped produce a show. I actually started off with acting. Then, I ended up assisting one of my theater friends with producing. Before I knew it, I was producing my own stuff. We did around ten shows a year all through high school, and I would produce and act in all of them. It was a lot, but it was a lot of fun, too.

EL: How did you first get involved in theater at Harvard? Did you ever think of acting here?
GS: I haven’t had a chance to act at all at Harvard. Freshman year I lost my voice so I couldn’t audition. Then, in the spring I applied to produce the Freshman Musical, Hero, which was a fantastic show and just so much fun. From there, once you get into a certain role on campus you’re kind of known for that role, so I ended up getting more involved on the production side.

EL: Wow, so how many shows have you produced at Harvard?
GS: Three shows: The Freshman Musical, Laughter on the 23rd Floor, and then the Hansel and Gretel Opera.

EL: Ok, tell me about Hansel and Gretel. What made you decide to do an opera?
GS: This is the first opera I’ve done. I actually didn’t know anything about opera going into it. I’d never even seen one or anything. I’d known the director, Olivia Munk, a little bit before, and we got along really well. She sat me down and told me about her vision for the show, and it sounded like a great group of people and a cool opportunity.

EL: You’re a neurobiology concentrator. That’s an interesting combination with theater. Do you see any overlap?
GS: Actually there is some overlap for me. I think it’s really interesting how moved we are by theater and arts. There is something in art that brings out emotions and experiences in people that nothing else does, and I’ve always been curious about where that comes from on a neurological level. I’m also interested in neurological disorders and how art therapy can treat those diseases. I haven’t done any research overlapping the two yet specifically, but it is definitely something I’m interested in in the future.

EL: You’ve done so many shows! You must have some great stories. What’s the biggest on-stage disaster you’ve seen?
GS: In high school, oh my gosh, it was so terrible. A kid threw up on stage in the middle of the show. He was just really sick, and he didn’t even know. Luckily, he was holding a newspaper so he just kind of threw up into it. But it was in a small theater, and it smelled terrible. We kept going though. The kid got right back on stage and finished the play.

EL: Ok. Here’s where I whip out some roommate knowledge. I heard you were on David Letterman once…any comment?
GS: (Laughs). Oh God. Yeah I did a science experiment on David Letterman. One of my high school teachers recommended me for it, so I auditioned, and then they flew me out to New York, and I got on the show. Actually (laughs) that’s a pretty good example of science and theater overlapping; we had to memorize all these lines and perform these experiments at the same time.

EL: And one more before you go… The big question: I know you’re the one that planned to have cookies at your final show. What’s your favorite type of insomnia cookie?
GS: I think I’ll have to go with the classic chocolate chunk. Can’t beat that.

Ahh, and this is why we’re roommates.