Hopefully, I’m not the only one. 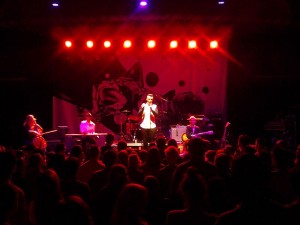 I remember last year when my friends told me to buy a ticket to see Sam Smith at the Sinclair. To be completely honest, I had to Google search this artist. Then I quickly recalled, “Oh he is the singer on the new Disclosure song!” I bought the ticket for a mere $30 simply because I had nothing better to do on a Wednesday evening at 11 PM.

The man who came on stage wore a nicely tailored suit, and it seemed as though he was wearing light sparkly eye shadow. However, once he took the microphone, all I could focus on was his amazing voice. It seemed as though the entire audience was mesmerized. Because I only knew Sam Smith from his vocals on a Disclosure record, I was expecting to dance. However, I soon realized that this concert was more about appreciating great vocals; an aspect of music that seems to sometimes hide behind auto-tunes and heavily produced beats. Don’t get me wrong; I love a good dance song. However, these days on the Top 100 there seems to be an abundance of EDM and a lack of true vocalists.

Smith’s lyrics about love can appeal to us all. The gay songwriter touches on various aspects of romantic relationships: rejection, nervousness, loneliness, and excitement. It was at this concert that I first heard the song “Stay with Me.” The following weekend he went to NYC to perform this song on SNL, and now this song has won Record and Song of the Year at the 57th Grammy Awards. Additionally, Smith took home the coveted prize for Best New Artist. Just to think, I went to a small Cambridge concert by the artist who would go on to become the Best New Artist 10 months later! When accepting his award, Smith candidly announced, “I want to thank the man who this record is about. Thank you so much for breaking my heart because you won my four Grammys.”

My appeal for Smith is not just his cute British accent or fun sense of style. He is one of the few artists where you can appreciate raw talent; talent without ridiculous outfits of Katy Perry or Lady Gaga, the promiscuous dance moves of Madonna, or the provocative photos of Justin Bieber. Last night at the Grammys, the music industry apparently agreed with me, as the show was essentially the “Sam Smith Show.”

Although certain artists like Rihanna have amazing voices, how can we appreciate the music when the artist sings with practically no clothes? Sam Smith represents what music should really be about; lyrics that an audience can relate to as well as a voice to beautifully convey these lyrics. Sam Smith’s domination at the Grammy’s should show the world that this is what music should be about. So my love for Sam Smith is not only for him as a person, but also for what more musicians should strive for.

Ritchey Howe ’17 (ritcheyhowe@college.harvard.edu) thinks Sam Smith would be the best Valentine ever.