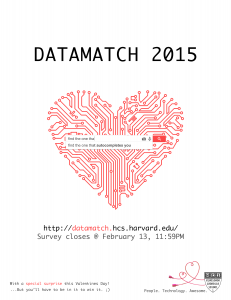 Earlier this week, I received Datamatch 2015’s call to action. Seeing this email brought me back to freshman year when I first enlisted the help of Datamatch to find the love of my life, or at least my first date. My roommates and I sat in our common room and embarked on a quest for love that devolved into a quest for trolls and laughter. We decided to make things a little interesting by debating which one of us had the hottest top match. I won.

After that little trip down memory lane, I wanted to learn more about Datamatch—whether or not these silly questions (e.g. ‘What World Cup soccer team best describes your sex life?’) actually held the key to my attaining an MRS degree. I sat down with Harvard Computing Society (HCS) board members Harnek Gulati ’17 and Raynor Kuang ’17. Both have been tasked with making Datamatch 2015 happen this February.

While Harvard students mostly know HCS as the brainchild behind the algorithm of love, the club’s mission is to provide the Harvard community with computing services. The club is also trying to branch out and integrate computing into the more social aspects of college life. Gulati, an English and Computer Science concentrator, joined the club his freshman year, becoming a board member later that spring. Kuang, a Computer Science concentrator, also joined freshman year. Though he didn’t originally seek out the Datamatch project, he soon found himself as the project point person.

Now charged with matching thousands of Harvard students in time for Valentine’s Day, Kuang and Gulati had their work cut out for them. “The code was really old—at least from 2005. It was a mess,” remarked Kuang. “The first thing I did was go through and make it work.” Getting the program to work would be slightly more challenging than originally anticipated. A server was accidentally destroyed thirty minutes after the initial launch last Friday. Despite those initial challenges, the 2015 Datamatch features several upgrades from previous iterations, including a search function that allows students to compare compatibilities with students who were not top matches once results are released on February 14th

Notwithstanding my best attempts to learn more about the specifics of the algorithm (i.e. whether or not there even is an algorithm), Gulati and Kuang stayed mum. They did however divulge a few details about how the algorithm works to match people. If you’ve ever wondered why a service meant to bring singles together asks for people in relationships to participate, then here’s your answer: the algorithm uses couples’ responses to determine patterns of compatibility. “If two people are in a relationship,” says Kuang, “we try to refactor relations that are similar.”

For those who want to game the system, Gulati says, “Just have fun with it. There is no way to game the system.” Though he jokingly remarks that befriending a member of HCS and coming to meetings could work in your favor. More earnestly, he urges people to take the matches more seriously. “You will match very well with your top five.” He adds, “We try to bring some of the same personalities together. Definitely try to talk and interact with them.” Though he did not explicitly say this, Gulati also seems to be telling people who troll the quiz that they may be risking eternal love and happiness.

The HCS Datamatch team is also hoping to make Datamatch part of a larger Harvard Valentine’s Day tradition. “We want to make it about the community,” Kuang says. Gulati got a little cryptic when pushed on what the reveal will be like this Saturday. “We really want to change—branch out and be more fun. Hopefully you will understand what that means on February 14th,” he says. Giving a small hint, Gulati states, “We want to make it easy for people to reach out to their matches—make it less of a hindrance on both sides.”

If everything else you’ve read so far hasn’t convinced you to log into Datamatch, then the relationship success stories Gulati and Kuang shared just might do the trick. “Last year my roommate and his current girlfriend got matched together. They started dating this year and realized later that they were matches,” Kuang shares. Gulati shared his own anecdote about the magic of Datamatch. “A former HCS president who now works at Asana met his girlfriend through Datamatch.”

If HCS members believe in their algorithm, then why shouldn’t the rest of us? I know that I will be filling out my Datamatch and resisting the urge to troll along the way. Who knows? I may even, as one of my roommates would say, gather the cojones to contact my top matches. What’s there to lose? If contacting my top matches is awkward and uncomfortable, I can always spend the rest of my Valentine’s Day living vicariously through Anastasia Steele in Fifty Shades of Grey and eating chocolate.