With World Cup experience and young players, the Crimson hopes to build on last year’s accomplishments. 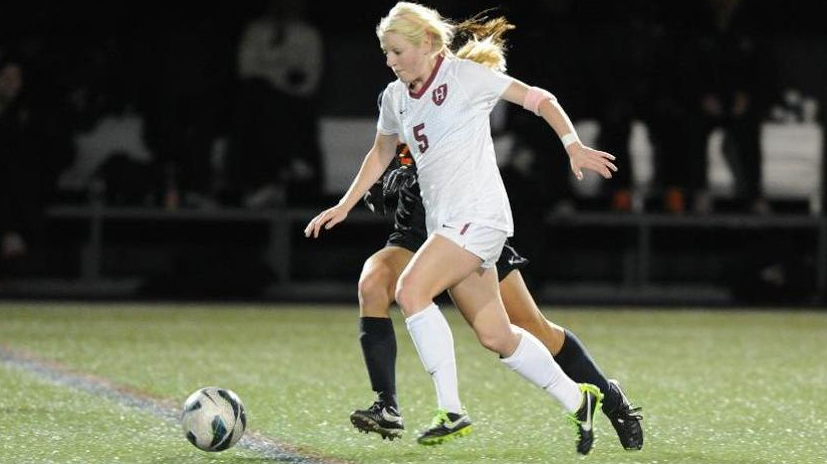 For the Harvard women’s soccer team, last season ended on a low note with a playoff loss to Boston University. After going undefeated in Ivy League play and winning the Ivy League Championship, the Crimson fell to the BU Terriers in the first round of the NCAA playoff. However, Harvard was and continues to be a team on the rise. Despite possessing the 2013 Ivy League Rookie of the Year in Margaret “Midge” Purce, who was also named the 2013 Ivy League Player of the Year and star goalkeeper, Lizzie Durack, also a freshman at the time, it took time for the team to gel. The Crimson lost the first three games of the 2013 season before going on a tear and winning the Ivy in undefeated fashion.

So, where did the team go from its unceremonious end? The U-20 Women’s World Cup in Brazil. Purce represented the United States, Durack played for England’s team, and incoming freshman Marie Becker was a reserve for eventual champion Germany. Another incoming freshman Caroline Chagares from New Jersey was in the pool for the American team before an injury forced her to miss the entirety of the summer, as well as Harvard’s upcoming season. The Crimson sent three players to the World Cup, the same number as national power houses Duke, UNC, Stanford, and defending champion UCLA.

In addition to the young stars on the Harvard team, the backbone remains. Harvard returns seven full-time starters as well as multiple role players. The only main cog that left the team was graduating senior Peyton Johnson. Becker has already made an impact on the center of the defense helping the Crimson to two shutout victories in their first two matches. Durack has begun to play full-time unlike last year and marshals the team from the back. On top of Durack, Harvard has senior goalkeeper Cheta Emba who stepped in against Providence to lead Harvard to its second shutout win of the young season.

Even without Chagares in the attacking third, the Crimson can simply outrun teams up top. Purce is considered to be one of the fastest players in the country, if not the world. For Team USA she slotted further outside putting her speed to use making runs to the end lines and slotting in crosses. For Harvard, Purce slots slightly deeper and more centrally. Then, she simply runs at defenders and shoots. It was a scary prospect for international teams to defend her this summer. It may be even scarier for overmatched Ivy League teams. In Harvard’s 2-0 victory over Providence on Sunday, Purce scored twice. In the season opener, Purce had the game-winning assist.

The difference in the team this year is that Purce has a little more help around her and could be better than last year. In the first game of the season she shot four times in the first 30 minutes, but failed to score. However, she adjusted and the winning goal came from her run to the end line, which resulted in a cross to senior Marie Margolius, whose header fell to the feet of Dani Stollar. She slotted the ball home for the winner giving Harvard its first win of the new season over the University of San Francisco.

The winning goal against San Francisco was the perfect example of how this team can evolve and improve. Purce took on the defense and havoc with pure pace and skill. However, it was a more sophisticated method of scoring then simply shooting herself. The pass came across and was ultimately scored by the third wave of attack in Stollar. Besides Purce individual talent, it is the supporting cast that has propelled Purce to the watch list for soccer’s equivalent of the Heisman trophy.
If one facet could hold Harvard back it is in the midfield. The Crimson has a stout defense and firepower going towards goal; however, can they form defense through the midfield into the attacking third. Peyton Johnson, a four-year contributor who graduated last year was a consistent presence sitting in front of the back line. Johnson helped that transition through the midfield. Becker is a solid replacement from a defensive perspective, but she plays a very traditional backline role and will not contribute significantly in the midfield.

Without a midfield presence, sometimes Purce drops deeper to find the ball. In theory, having your best player in the middle of the field works well. However, in the season-ending loss to BU last year, Purce’s dropping deeper deprived her of space and left the Crimson without a threat near goal. Without space, Purce cannot use her greatest asset — speed.

With Purce leading the way and a solid defense, the Crimson should roll over most of the Ivy League competition. The firepower especially in the younger members of the team is significant. The true test will come later in the season as the level of competition increases, and the Crimson will be pressured in getting the ball from their solid back four to their speedy frontrunners. If last year is any indication, the team should develop as the year progresses and build on last year’s success.

Peyton Fine (peytonfine@college) is impressed with the talent accrued on Harvard’s soccer team, especially amongst the younger members, but still is concerned about the center of the field.