The surviving gardens of Istanbul. 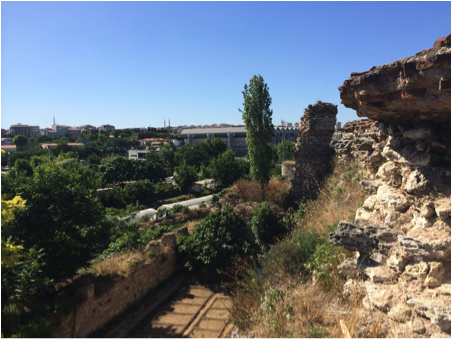 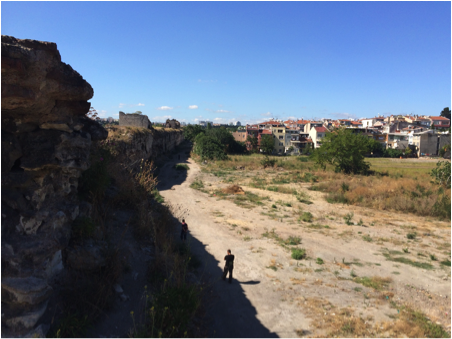 At first glance, the Yedikule Gardens appear more to be a sparse collection of private farms trapped amid the dawn of the days of Constantinople and the booming gentrification of modern Istanbul. These bostans, or market gardens, are situated along the edges of encroaching apartment complexes and mall plazas while aligning the sides of historic Byzantine walls and Ottoman water wells. As generational families of farmers work to maintain these endangered spaces of vegetation, one would be keen to notice the symbolism in Istanbul’s ongoing struggle between tradition and progress.

The Yedikule gardens exist as more than a valuable source of local food production. These lands are a way of life involving the social interactions among the gardeners, their families, and those who seek to emulate their timeworn practices of transforming harvests into cultural dishes made for the people’s delight. Just as industrial terrain is a part of city expansion, agricultural land should also play such a role. Though seemingly out of place with their ancient water wells and hanging laundry drying in the Mediterranean wind, the atmosphere of Yedikule preserves a period of Istanbul too precious to be left only to esoteric textbooks on agriculture.

For each garden, there lies a history. Just think of the third-generation farm. The current owners operate during a fight to restore the Yedikule bostans to their former glory while the first generation would have lived through the initial decades of the Turkish republic. In the middle, one would have seen the uprisings of military coups and the transition of Turkey into a multi-party state. These are what intellectuals and the informed will study and remember, but those who plant the seeds and plow the soil deserve a respect all to their own.

Even during the late nineteenth century, Theodosian walls ran through the bostans accompanied by mosques in the distance. It was just before the turn of the twentieth century that the first living lodges began to supplant urban farms. Though the first steps towards gentrification had begun, an abundance of flora still thrived inside and outside of the old city. As of 1900, Yedikule appeared lush and lively, with trees in the distance aligning the horizon while plots of land showed signs of care.

Yet by the mid-twentieth century, many of the gardens within the walls start to be swapped for the construction of concrete homes on gravel and cement. The same trees that once stretched across the terrain have become scant compared to the planted trees of residential homes. There also exists a certain contrast between the still standing Theodosian bulwarks and the vast neighborhood of two-storied houses with deciduous trees. The residential districts creep so close to the edge that they almost touch the very bricks that once guarded the ancient city. The whole area resembles a set out of an anachronistic film, welcoming thousand-year-old stockades fencing off a neighborhood in the twenty-first century. For the wall itself, there are breaks and eroded segments, but its presence persists even against encroaching housing complexes. Changes in vegetation contrast the striking continuity of the Byzantine-Ottoman ramparts. While once farmed-on land is now lived-on land, the same wall still sweeps over the area of Yedikule, yearning onto its history unperturbed by modernization.

Fast-forward to today, and any visitor can perceive a certain sense of desperation coupled with urgency in the region. Tanker trucks encircle the few remaining wells in order to supply water for public hamams. One side of the walls could be mistaken for a developing American suburb while the other displays the surviving fresh tavas of spinach, mint, and corn. If daring enough to observe atop the walls by scaling the unguarded railings, a turn of the head reveals two worlds converging against each other. To the left is a hopeful sign of growth, both literal in agriculture and symbolic in livelihood, and to the right is an uncertain desolation. No bostans remain on this side, and it seems all land has been reserved for more urban construction. Ironically, it is the fortifications that have endured, albeit with some damage and need of repair, while the once-protected interior gardens have given way to rising urban sprawl.

The truth of the matter is that people need places to live, and a city needs space to grow. However, a greater truth is that historic cultures and traditions should never be neglected for the sake of potential profit. Istanbul is a thriving example of bridging the past with the present, and Yedikule is a prime model for that challenge. Perhaps one day, humanity could find a way to resolve this conflict of culture in which social traditions may carry on peacefully alongside progress.

Michael Luo ’16 (michaelluo@college) thinks there is not much more pleasant than sipping tea on the Bosphorus.