When the “Go”ing Gets Tough in Hikaru No Go 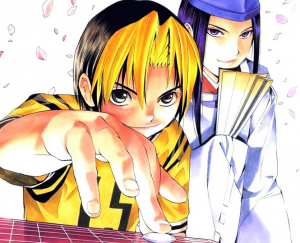 I went to Anime Boston at the Hynes Convention Center last weekend and it was pretty much like seeing different fictional worlds enter 3D reality and crash together in one place. Cosplay — the portmanteau of “costume play” — is the norm at any anime convention. For 3 days, thousands people don completely different identities by wearing costumes of their favorite characters. Going (of course) as a magical girl, I was excited to scout out characters from my favorite series. Among the safari of Pokemon trainers and Japanese school girls crowding the Prudential Mall and passing by confused civilians who chose the wrong day to shop, I did find a total of three people from Pandora Hearts (kudos to them). While I also found a giant Minion, as well as the Joker and Ariel making out in a corner, my most exotic find was probably a character from Hikaru no Go.
“Exotic” might be odd to imagine considering the fact that I’ve seen people walk around with computer screens around their heads and giant takeout boxes on their torsos all day. People like to think up of the flashiest things for photo ops. So it’s fair to say that I had not been expecting to see any character from a series about an obscure board game. Originating in China, Go is a rough, East Asian cousin of chess. It’s a two-player, strategic game involving a grid-like board with intersections where black and white stones are to be placed. In order to win, one player must use his stones to surround a larger area of the board.
As you have probably already imagined, Yumi Hotta’s Hikaru no Go is certainly no fantasy-action series (although to be fair, it does have a ghost in it). It’s a story of a lackadaisical boy named Hikaru Shind? who slowly discovers and builds a passion for playing Go. This newfound recreation first comes to him when the ghost of Fujiwara no Sai, a Meiji Era professional player, comes to haunt him. Hikaru no Go belongs to an entire “hobby” series that include realistic shows about games and sports. It follows the protagonist through a succession of contests and tournaments that take him closer to his ambitious goals. But even in this already overshadowed subgenre, Hikaru no Go is eclipsed by more action-filled series such as Kuroko’s Basketball and Prince of Tennis. It’s really a shame though, because the bias against nonphysical hobbies in media prevents people from enjoying a series that has greater quality in storytelling than any of the big-name sports anime or manga.
College culture is overwhelmingly comprised of competitive activities, the most obvious ones here being sports. On campus, we have athletes, ex-athletes, and fans, but we also have chess-players, debaters, and performers of all sorts. Plus, our entire system for joining extracurricular groups is based on the “comp.” I played competitive tennis for eight years before I came here, yet ironically I have never found a sports series that has resonated with me, not even Prince of Tennis. I’ve never played Go more than 10 times in my life (all of which I lost), but instead I relate best to Hikaru no Go. Maybe it’s because I’ve never witnessed anyone, not even Roger Federer, hit a forehand fast enough to break the time barrier and cause the extinction of the dinosaurs (I kid you not, there is a clip of it from Prince of Tennis on YouTube). Or maybe it’s because I have never, ever thought it would be cool to name my shots something like “Samurai Dive” and yell it out during a match.
Most of my qualms about popular sports anime these days come from the fact that they’re more often than not ridiculously exaggerated, ridden with superhero-like tropes, and increasingly reliant on a female audience interested in hot guys. Hikaru no Go manages to avoid all that. Yumi Hotta knows that the game itself isn’t really what matters; it’s how the game affects and changes the characters that concerns us and makes the show resonant. For most of us, extracurricular activities have played a large part in our lives. We’ve all set goals we’re not entirely sure we can achieve and in running towards them, we’ve fallen several times and needed significant motivation to pick ourselves back up. In a relatable way, Hikaru and his friends grow up through playing Go. They lose friends through competition and then make new ones. They lose their confidence after heavy loses, come to terms with their limitations, and then dare to redeem themselves again. Little by little, they change from the lessons they’ve gained. By the end of the series, Hikaru has gone from being a 12-year-old brat to an 18-year-old young man. And what’s absolutely amazing about his and the other character’s transformations is that it is done so gradually that you never realize how far they’ve come until you actually look back to compare. Whereas most series like to use the cheap effect of time skipping, Hikaru no Go takes on the challenge of taking the reader through each step of the journey, and it succeeds in doing so.
Ultimately, Hikaru no Go has the potential to hit home for a large audience because it is quite simply a realistic story of ambition. It’s a bildungsroman that deserves a chance against the stifling assumption of boredom. On a more personal note, the series holds a great deal of respect from me because it is the only anime show I’ve watched with my sister. Considering that she and I have very different interests, it says something when a show manages to bring us together once every week. Neither of us knew a single thing about the strategies used in each game, but honestly, we didn’t really need any information. All we needed to know was the pains and rewards of chasing a dream, which is hardly an exotic tale at all.

Joan Li ’17 (joanli@college) ‘fesses up to being a fan of the swimming anime because she can’t help but find it funny and wonder why anime guys don’t have nipples.