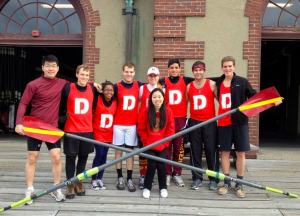 With the launch of House shells into the freshly de-iced Charles and the muffled grunts of tennis matches yet again filling the Murr Center’s air, the spring intramural season is well underway. Coming off of an eventful winter season that has left several Houses neck-and-neck for the Straus Cup, House teams are racing towards the finish across a wide variety of sports and events. The Harvard House Intramural Program, which overseas all IM coordination, has drawn up tournament brackets for A and B-league volleyball, men’s and women’s A and B crew, and mixed gender softball, soccer, flag football, ultimate frisbee, spikeball, and tennis. While most sports are already multiple games into tournament play, the Houses will also eventually compete in a track and field meet, a swim meet, and a fencing meet (epée only), as well as in this Sunday’s 1.8 mile “River Run.” Designed to facilitate “the pursuit of excellent through personal development and teamwork,” Harvard’s intramural program seeks to provide a sportsmanlike outlet for recreational athletics to students across campus. Accordingly, the student IM representatives that the Independent spoke to assured us that each of their respective Houses participated in the program for the love of sport, rather than to win. At the end of the semester, however, only one House gets to lock the shiny, silver Straus Cup into its trophy case.

As it currently stands, Dudley House — Harvard’s thirteenth, non-residential House comprised of graduate students and undergraduates who choose to live off-campus — holds the lead with 1,097 points. Winthrop comes in at 1,066, a very close 31 points behind Dudley, and Dunster is settled in third with 991. A full 159 points behind the third place slot is Adams House, followed by Cabot, Kirkland, Leverett, Eliot, Pforzheimer, Lowell, Mather, Quincy, and finally Currier, which has managed to rack up just over 180 points over the past two seasons. Because points earned are not calculated until tournaments are over, the rankings haven’t budged since the end of the winter season. Nonetheless, with multiple wins already down in ultimate Frisbee, softball, and flag football, Dudley might be a difficult House to beat. If Winthrop and Dunster have anything to say about it, however, Dudley House will not find victory easily, a fact that Dudley House athletic fellow Kelly Miller is well aware of.

A graduate student in Applied Physics, Miller is pinning her House’s hopes on a strong showing across all four divisions in rowing. Acknowledging the threat that the Kirkland and Winthrop crews pose to Dudley’s established dominance on the water, she believes that the House’s talented softball and tennis players should make up any point differentials on land. Yet, Miller emphasized that whatever the outcome might be, intramurals amount to more than bragging rights. “House rowing has probably been one of the best things I’ve done as a graduate student,” she said, and explained that many of her peers agree. After a successful winter season that saw the thirteenth House claim victory in squash, rock climbing, and the perennially popular inner tube water polo tournament, however, Miller is hoping that Dudley IM captains will continue to marshal enough interest among the dispersed graduate student population to guide the House to its first ever Straus Cup win.

Undoubtedly, Winthrop poses the most tangible threat to Dudley’s lead. Despite losing its five-year stranglehold on the Straus Cup to Kirkland last year, Winthrop has held on to its reputation as an IM powerhouse and currently sits three seats above its usurper in the IM rankings. If Winthrop is set on reclaiming its lost glory, however, IM student representative Jimmy Field ’14 is keeping the plans under wraps. Although he concedes that some Houses might do better than others in any given year according to the athletic abilities of the students sorted into them, Field tacks up his House’s past and present triumphs to a combination of House pride, teamwork, and luck. “It’s a communal process,” he said of Winthrop’s approach to the intramural program. “The biggest thing for us is making sure that the people who are coming out are having a good time. That’s really the most important thing for continued success.”

Connor Hinebaugh ’15, Cabot’s IM student coordinator, agrees, saying of his House’s approach to crew, “even if we don’t win just getting out on the water is a great experience to try while at Harvard.” Yet, currently fifth in line for the Straus Cup with 706.5 points, if Cabot manages to replicate past seasons’ nail biters in the spring season it could see a significant jump in the rankings by May. Proud of his House for the successes it has had thus far, Hinebaugh praised his fellow Fishes’ dedication to their IM teams: “Ultimately, we have great house spirit. During the winter it can be hard to get people down to games because of the distance…other than that I think we’re a really close knit group, which helps us work together on the court, the field, or whatever we’re playing on.”

While distance from athletic facilities has failed to keep Cabot from landing in the top half of the heap, fellow Quad House Currier has seen little success overall. However, as Tyler Gamble ’14 explained, Currier’s dead last ranking might have more to do with the House’s athletic priorities than a lack of enthusiasm or ability. Rather than attempting to drum up mass support for more obscure events such as spikeball, Currier focuses its efforts on its prospects in basketball and, especially, soccer, whose championship it won tidily in the fall. Said Gamble, “This season, we’re playing for a repeat. It’s all on soccer.” He continued, “We’re the farthest from the field, we’re the smallest house, but somehow, in soccer, we manage to pull it all out.” Although soccer is only a “double special event” in the spring and therefore worth fewer points than the “major sport” of volleyball, for example, Currier plans to take the field this season for a different kind of win altogether.

Meghan Brooks ’14 (meghanbrooks@college) is rooting for Dunster, except (maybe) in soccer.