Building, painting, and working down in North Carolina. 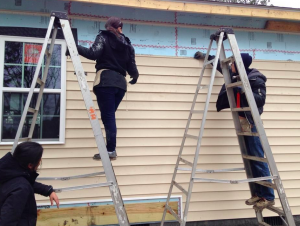 Over Spring Break, thirty-one Harvard students packed into PBHA vans and drove down to either Virginia or North Carolina as a part of the school’s Habitat for Humanity Spring Break program. Twenty-one of the students, myself included, went down to Goldsboro, North Carolina, where we stayed in the local Parks and Recs department (alas, Leslie Knope was not present) by night and worked at a local site by day.

Once there, we had five days to get as much work done as possible. Around eighty students from a number of colleges and one high school were living together and working at the site, so being undermanned was never a problem.
On the first day, five students went to a construction office that had been closed down and loaded various pieces of furniture into a truck, while the rest of the crew was located at a warehouse not too far away, sorting the furniture, organizing the already present materials, and doing any job that was assigned. For the next four days, however, we all worked together at a site that had three ‘houses.’ One wasn’t built yet except for basic parts of the base, another was completely finished on the outside but had work to be done inside, and the last was build but needed siding finished.
A large group of students from Kansas State University — most if not all of whom were construction majors — along with a select few from Harvard worked on the house not quite built yet. With hammer and nail in hand, they completed most of the outside of the house, even putting the roof up before the end of the week.

The rest of the group was assigned a variety of tasks that varied day by day. In general, people were divided into either siding teams or cutting teams. While the names are essentially self-explanatory, the latter would cut pieces of siding so that the former could nail the strips into the wall without allowing any part of the inner framework to be showing. The was the majority of the work for the final four days of the trip, with teams uniting and working together to put great work into this house.
A number of students also went into the finished house and painted the walls and ceilings of the house, so that the finishing touches could be put together soon after we left the build. Also, as the days went on, and room for siding was limited, students began clearing bushes in the back yard, building doors for the sheds in the back, and starting the insulation inside the house.
All in all, the five days of work were both incredibly productive and a great bonding experience. It provided many of the us the opportunity not only to meet a variety of Harvard students that none of us had met before, but also to be introduced from other students from around the country. After work, we would all return to the Parks and Rec Center, where we would cook meals, play games, and just sit and talk to people from all different backgrounds.

While the week may be over, the memories gained, friendships formed, and work achieved will never been forgotten.

Sean Frazzette ’16 (sfrazzette@college) hopes to continue to work with Habitat in the future.