What do the banana and condom have to say. 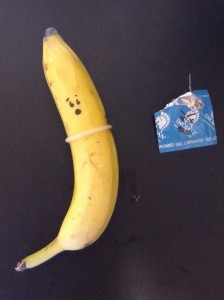 In honor of sex week, The Indy took the liberty of interviewing a pair that’s been around the block. (The sex block. As if we’d talk about any other kind.) I sat down in Boloco with a big, hot burrito and veteran sex-ed instructors Banana and Condom to get their take on all things awkward and latex.

Lauren Covalucci: Thanks for meeting up! I’m curious: how did you get involved in sex education?
Banana: Growing up I never saw myself in sex work. But when I started getting ripe I looked at my options and it seemed like a good possibility, you know? Fruits from my tree don’t really have a lot of options in life — I mean, most of them leave and we never hear from them again. I know my friend Stan made it into a banana cream pie, which apparently was great, but then you have bananas like Beth getting mixed up in some bad things… We think it might have been pancakes. And I didn’t want to be like Beth. So I got the sex-ed gig with Condom and we’ve been working together for about half a class period now. It’s not the traditional path for a banana but I think it was the right one for me.
Condom: My story’s a little different from Banana’s because I never had a lot of options. Ever since I was little I’ve been severely germophobic. I’m sure you can imagine that caused all sorts of problems. It was hard to admit that there just aren’t a lot of job openings I would feel comfortable filling. Even before we come out of the factory we’re made for a very specific purpose, so finding something else was tough. I didn’t want to be one of those kooks who got made into a water balloon, so this was the best option for me out there. My parents were disappointed at first when I told them what I’d be doing, but they respect me and I think they’re starting to understand my choices.
LC: It’s not a career with much longevity.
C: From your perspective, maybe. In the classroom I’m on the field for a lot longer than I would be otherwise. We’re built to last a good long while but so many of us are forced into retirement after only five minutes. It makes me pretty sad, honestly.
B: Having such a short career is great for bananas. In the food business there’s a lot of pressure to stay young and fresh, or at least keep up appearances. And we can be on the market there for up to a couple days. With sex-ed, it’s a lot less of a struggle to stay hard, since I’m only on call for an hour or two, tops.
LC: Have things always gone smoothly for you two? How’d you meet?
C: We were thrown together pretty abruptly, but we learned how to get along. Sometimes it takes a few tries to get things right, but we never experienced much friction.
B: It helped that Condom came pre-lubricated.
LC: I’d imagine that your job is pretty thankless. Do you ever feel disposable?
C: Yes.
B: We all have a lifespan.
C: Even if you can’t do it for very long, the important thing is that you do something. I’d rather meet my end outside my wrapper than sit for a year and expire in someone’s drawer.
LC: But is it worth it?
C: I like to think so.
B: Especially with the younger grades, these kids have never done anything like this before. It’s really satisfying to know that you might have helped keep someone safe.
C: Or at least made someone’s first time a little less awkward.
B: Wait, I’m sorry… Is that a smoothie?
LC: Yeah, why?
B: What’s in it, just strawberries?
LC: No, it’s strawberry and banana. Want a sip?
B: No, but I just found Beth.
[Interview terminated.]

Lauren Covalucci (lcovalucci@college) got her sex-ed at a Catholic high school, which is a whole other story.