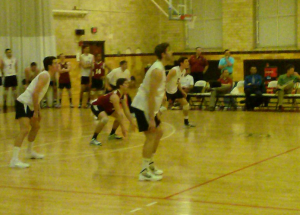 While the Harvard men’s volleyball team may be known to break hearts with their good looks off the court, the squad broke more hearts last week after they beat Sacred Heart 3-0. Currently, the Crimson is seated fifteenth in NCAA rankings and is second in the Eastern Intercollegiate Volleyball Association (EIVA). Last week’s game snagged the team’s seventh consecutive home victory in the Malkin Athletic Center.

Despite the MAC being filled with semi-rowdy Sacred Heart fans (no other fans can heckle quite like Harvard’s finest), the Crimson still pulled off winning three straight matches. During the first set, Caleb Zimmick ’15, a middle blocker, was the first scorer for Harvard after we received three points due to service errors. Harvard took an early lead, beginning the game 8-4. Sacred Heart attempted to answer Harvard’s challenge, but was never able to take the lead. Harvard closed out the first set 25 to 17. Standouts in the first set included DJ White ’15 and his brother Casey White ’17, both outside hitters, Zimmick and captain Nick Madden ’14.
After a disappointing first set for Sacred Heart, the Pioneers came back with a renewed energy to give Harvard a run for its endowment. In a close matchup that ended 26-24, Harvard was still able to maintain victory bringing the team 2 matches to 0. Throughout the second set, Harvard and Sacred Heart were constantly battle for the upper hand. This neck and neck battle resulted in six ties over the course of the set.

After Harvard would make an impressive play and score, Sacred Heart would almost immediately respond, reminding the Crimson that the Pioneers were still on the court. At no point during this set was there a point difference of more than three points. Ultimately, Harvard clinched the win after Sacred Heart committed two service errors. These mistakes made the tense 24-24 set a decisive victory on behalf of Harvard.

Harvard needed only one more set in order to claim an overall victory. Despite opening the third set up with a kill from DJ White, Harvard quickly fell behind. At the midway point in the game, Harvard was losing 14-7.
Sacred Heart was playing with a renewed sense of tenacity, as the hopes of going into fourth set seemed more likely. After several service errors and kills by DJ White and Zimmick, Harvard was able to tie the game up 21-21. Harvard and Sacred Heart fans were on the edge of their seats as each time was on the cusp of victory.

The Crimson and Sacred Heart dueled it out — when one team would score, the other team would almost immediately tie the game up again. Harvard closed the deal by scoring two points off of Sacred Heart’s service errors. DJ White led the team with the most number of kills at 12. He also had the second highest number of digs at 12, following Madden’s 13. Zimmick had seven kills, marking him as the second highest scorer.

Hopefully all of the energy from this game will translate into an 8th consecutive win in the MAC on Friday, April 5th. This week Harvard will be playing huge EIVA rival Penn State. The Nittany Lions are Harvard’s biggest competition in volleyball. This year, Penn State will be seeking revenge to after the Crimson’s epic upset last year. If undergraduate students choose to go to only one volleyball game of the season, this is definitely the one to attend. Not only is the heckling on point, but the exhilarating atmosphere of the Harvard Men’s Volleyball team playing their last conference game is tangible.

In other sport successes from this past week, the women’s rugby team beat Boston College 105 to 0. This weekend they will travel to Penn State. Hopefully the Nittany Lions will be beaten both on the pitch in Pennsylvania and on the glossy wooden floors at Harvard.