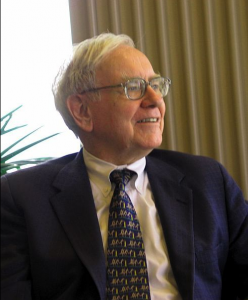 Two weeks ago, I had the incredible opportunity to meet one of the most legendary investors and wealthiest people in the world: Warren Buffett. As Buffett surpassed 83 years of age in August, I must admit that I initially couldn’t help the thought that I would be meeting a slightly senile, soft-spoken man creep into my mind.

Boy, was I mistaken.

47 young ladies from Smart Woman Securities, a national organization dedicated to financial investment education with undergraduate chapters across 17 universities, convened in Omaha, NE to meet with some of the city’s most prominent business executives. After a whirlwind of meetings with Mr. Buffett and Berkshire-owned companies, we sat down to a private dinner with Mr. Buffett at Gorat’s, a modest, family-owned steakhouse. Looking around the room, I noticed that every person looked jaded and ready to collapse on a hotel bed — except for one person, who happened to be the oldest in the room. An unmistakable twinkle — like that of a five-year-old — shone from Mr. Buffett’s eyes, right down to the final dessert course. As he turned down all of the restaurant’s fancy cake options, instead opting for “a scoop of vanilla ice cream with a whole lotta chocolate sauce,” he himself described his actions like that of a kid: “I eat like a five-year-old,” he chuckled. “I haven’t eaten broccoli since I was four. I eat whatever I want.”

This consistently carefree, cheerful attitude in someone his age (or even in an adult over the age of 30) is harder to find than a perfectly stable stock. Somehow Buffett has managed to preserve the genuine curiosity and sweet innocence of childhood into his golden years, giving him a magnetic personality. At a time when most people his age have retired and complain of arthritis and insomnia, Buffett still drives himself to work every day to manage his company — and makes jokes while he does it. “You know, if I’d been born thousands of years ago when the dinosaurs were alive, I wouldn’t have survived. There would be the strong ones who could defend themselves, and then there would be me. ‘I’m just allocating capital,’ I would say — and someone would instantly snatch me up.” He flapped his wings like a feeble baby bird as he said it. The Q&A session audience roared with laughter.
I was amazed by his energy and enthusiasm for the group — even though we (amidst a few yawns) bombarded him with questions during lunch, our Q&A session, and dinner, he took the time to look each questioner in the eye and provide a lengthy and thoughtful response, while remaining cheerful and light-hearted. While he considered all of our questions, he did seem intent on sending us a pre-defined message with advice (relating to investing and life in general) that he expertly interwove through his responses. How should we best invest in ourselves? “Improve your ability to communicate, both oral and written.” What are you most proud of in life? “The biggest job you’ll have in life is raising children — only you can do it. Who you marry is enormously important — it’ll affect everything.” After a student asked him the ultimate question — “what do you need to be successful?” — he took us through an interesting thought experiment:

Assume you had to pick a classmate, and you would receive 10% of their earnings for the rest of your life. You wouldn’t pick the person with the highest IQ or GPA, or even the person who kicks the farthest [has the best athletic ability]. Who do you think about? The reasons for picking certain people are not qualities that these people were born with – they’re behavioral characteristics that people elect to have. You’ll pick someone with certain habits that you know are conducive to success.
Consider the converse scenario — if you had to pick someone you’d have to sell short — and you’d have to pay 10% of their earnings for the rest of your life. You’d pick someone with certain characteristics that you think might more likely result in failure — someone who is never on time, who lies, etc.

You have certain habits you can choose to have. Why not have the habits of those you can admire, and get rid of those you don’t admire? You can learn more from classmates than teachers in seeing what works. The time is now to pick up those good habits and get rid of the ones you detest — you will be better because of it. People want someone they’ll truly like to work with.

The advice he gave us, albeit simple, was pretty powerful stuff — perhaps due to its simple, tried-and-true nature. He makes his investment philosophy sound just as easy: “People hate it because it’s so simple, but if you invest now, you’ll have a lot of money.” Buffett’s ‘buy and hold’ mantra seems to have succeeded, with Berkshire shares gaining over 70-fold more than the market overall from 1965 to 2013. “All investing should be value investing,” he emphasizes. “The question is, what do you look for?” Buffett finds it key to invest in companies “that have already won the race” — companies such as Coke, Wrigley’s, Gillette, Heinz, and Nebraska Furniture Mart that have dominated their sectors of the market and whose products or services are sure to remain in high demand for generations. “No one’s going to stop eating ketchup,” Buffett exclaims. “People might even start eating more ketchup in the future!” Likewise, people will always need furniture when they buy a new house, or razors to shave. Heavy branding from companies such as Coke, Wrigley’s, and Gillette have created a dependence for their products that goes beyond the utility of a soda or a stick of chewing gum or a razor when they’re needed — it extends to auras of success, of happiness, of the American dream — that transcend our notions of intrinsic value. Buffett’s remarkable capabilities lie in the fact that he is able to single out these uniquely successful companies from the rest — and he’s so good at it that whenever he receives a phone call from a potentially interesting company, he’s able to determine in the first two to three minutes of the call a rough idea of the company’s prospects for the next five to ten years. As he modestly stated, “When [Charlie Munger & I] insure anything we think the odds are in our favor. We would never dream of working on a game where the odds were not in our favor — it doesn’t make sense. We’re rational, and every decision is made from a point of rationality — actually quite a rare quality in business.”
Buffett’s personality radiates his optimism in America and the American dream. “We are exceptional…if you think about what America has done, it’s not an accident.” Reminding us of our good fortune in being born today, he points out the fact that all of us live more comfortably than business magnate John D. Rockefeller in the early 1900s. His optimism, ironically, peaks during periods of economic instability. During the 2008 economic crisis, Buffett was one of the few people to remain confident in the market’s ability to recover — in fact, when the market fell by 37% that year, his shares fell by only 9.6%. Periods of sudden economic downturn don’t phase him — he doesn’t “worry about the fact that markets are irrational and volatile” because he knows he’ll “get rich holding steady.” In fact, Buffett sees these periods as excellent buying opportunities: “as long as you divorce yourself from the emotions of the crowd, [the fact that people exhibit emotional liquidity] can really be to your advantage.”
Warren Buffett is easily the most humble and down-to-earth guy I’ve ever met. While he might display pride in America, he reminds us of the importance of staying humble: “It’s nice to think you’re a little exceptional, but important not to carry that too far.” A strong supporter of wealth redistribution, Buffett has already pledged to donate 99% of his wealth when he passes, with 83% of that going to the Bill & Melinda Gates Foundation. “The more you give, the more you get back,” he says simply with a smile. Moreover, he has persuaded 122 other billionaires to give the majority of their wealth to charity.

Oftentimes, I wonder what makes people stand out — why some individuals, like Mr. Buffett, have been so much more successful than others. In my opinion, it all goes back to the little thought experiment Mr. Buffett fabricated: the way he has chosen his habits — the way he lives his life — has defined his values and personality, which, in turn, has directly affected his success. From humility, to humor, to hope, the qualities Buffett has chosen to emulate reflect not only in his work but also through the lives of everyone he touches. He has certainly touched my life at a point in time where I am beginning to define who I want to be, and I know he will continue to touch myriads of young lives in the foreseeable future.