The College makes a class. 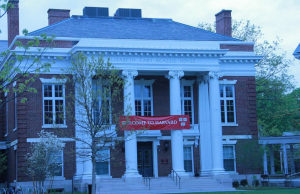 Each year, on the last week of March, the world learns what makes a Harvard student. Though admissions is as much about making a class as it is an effort to find the best and brightest, to select 2,023 from 34,295 necessitates some attention to the individual. But what exactly does Harvard care about in choosing its students?

William R. Fitzsimmons, dean of admissions and financial aid, smiling warmly, would cite the diverse and dedicated set of passions from every echelon of society (his exact words in the Gazette last week were: “‘The Class of 2018 reflects the excellence achieved by the students of an increasingly diverse America. Attracting such outstanding students to the College is vital to Harvard’s mission of educating the future leaders of our nation’”). Those watching the spike in Computer Science and Engineering degrees might suppose that Harvard spends its effort looking for a Zuckerberg/Gates-type who will actually complete his or her four years. Harvard relies on (and subsequently pampers) its alumni, but a good image necessitates more than athletes-cum-ibankers. Harvard is, after all, an institute of learning. College students may not be as vital to the academic lifeblood as the faculty and graduate researchers, but without bright-eyed undergrads to live and learn what the faculty has to teach us, the whole university system of causing new people angst about problems they could never solve and convincing them that trying might be kind of worth it would break down. And then where would we be?

For at least the last decade, Harvard has celebrated the same milestones during admissions week. In each successive Class of 20-and-such, there is a higher percentage of minority students accepted, more extensive financial aid provided, and a new cohort of alumni to thank gratuitously. These golden nuggets of the admissions data make it into Gazette headlines in an effort to bring up, time and time again, the College’s desire to make Harvard a more accessible place for all, regardless of socioeconomic background.
Undoubtedly, these are all good, necessary measures: the Class of 2018 will include record-breaking representations of African-American and Latino students, at 11.9% and 13%, respectively. These numbers don’t look too bad compared to (likely under-representational) national statistics, which number African-American and Latino populations at 13.1% and 16.9% of the total US population, respectively. It’s not reported whether or not most of these students come from schools from which Harvard has already recruited: for example, the number of students from disadvantaged economic backgrounds come largely from urban rather than rural areas, which are harder to access and are less likely to receive information from neighboring schools and/or district communications. In either case, the continual increase suggests a dedication to expanding Harvard’s accessibility to underrepresented groups. Moreover, the Harvard Financial Aid Initiative (HFAI) reports that 90% of American families would pay the same or less to send their child to Harvard than they would at a state school (tuition, room, and board paid is on average $12,000 a year across the College). Even the cynics can’t deny that Harvard can act in line with its rhetoric.

Of course, increasing Harvard’s accessibility and diversity isn’t just for the good of humanity. Harvard’s image wavers on a border of extremes: it is both a shining beacon of the American meritocracy and a vomit spewing, cheating, American-Psycho birthing ground. Harvard, unlike the 2012 GOP, knows it has to keep up with the times to win. Although there aren’t any Harvard brochure statistics on determinedness, it seems probable that the hardest working students are those who come from economically challenged backgrounds, those whose parents are immigrants, or those from academically and/or professionally underrepresented communities. Not only have these students produced Harvard-caliber work without necessarily having access to the resources of their privileged counterparts, but they also have the “most to lose.” Unemployment might mean draining one’s family’s already strained resources, when success could mean providing a safe, healthy home for loved ones. As with all gross generalizations, this works on a case by case basis; however, it seems likely that what Harvard sees in students from underrepresented and economically challenged students is the doggedness they have shown all their lives in their schoolwork and extracurriculars.

Even Harvard can’t escape moral obligations (no, really). The administration is increasingly made up of those who would have benefitted from programs like HFAI, and with initiatives like the Undergraduate Minority Recruitment Program (UMRP), students, staff, and faculty who see the ethical, economic, and social benefits to a College accessible to all can influence the makeup of the undergraduate student body. This action on behalf of underrepresented student groups makes one wonder: in two or three years, will Harvard start recruiting humanities concentrators? The current trend seems towards entrepreneurship (and interpreneurship, or some other ilab word) than ole-fashioned book learnin’, but the (unconfirmed) impending riots in the Barker Center may ask Harvard to reevaluate the percentage of pre-professionals they admit. After all, the more voices there are on campus, the wiser we will all be, and all the more prepared to enter (and, so they say, lead) the world.

Christine Wolfe ’14 (crwolfe@college.harvard.edu) just wants to graduate before they reevaluate her acceptance.