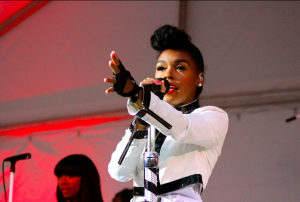 Late morning last Sunday, a friend on Facebook commented on my Spotify activity. The comment, with some amusement, questioned why I was listening to Janelle Monáe on repeat if I was about to see her in but a few short hours. Excitement was the answer.
Though I had heard her name before, I could not claim I had been a fan prior to the announcement that she would be headlining Yardfest. In fact, I had not even known that she had been the one doing the backup vocals on Fun.’s We Are Young. I knew Janelle Monáe as the artist who had received the 2012 Critics’ Choice award for brightest rising star at the Brit Awards, and I knew this only because the following year, I watched her present the 2013 Critics’ Choice award to Tom Odell — an artist I actually knew and liked. I had heard her name, I knew she must be good if she had received the same award as an artist I was a fan of, but for all that, I had had no idea what her music sounded like. Until I did, and then I just couldn’t stop listening.

The Electric Lady, as she calls herself — though she emphasizes that we are all Electric Ladies and Electric Men — is described as an R&B and soul artist, and while there’s definitely something pop-y, something blues-y, jazz-y, something funk-y (all of which can be applied to R&B) about her music, none of those descriptions quite seem to cover just what Monáe manages to do. There’s something classic and nostalgic to some of her sounds, but also an undeniably fresh element to her voice and to her tuxedoed image. There is an undeniable get-up-and-dance vibe that was apparent in recordings even before I saw her perform, and that had me nodding my head and tapping my toes, but seeing her live was another experience entirely.

The crowd cheered, and sang along, and after her set vociferously demanded one more song one more song one more song, but more importantly, we danced. Music, concerts, and parties are always a reason to dance, but there is a difference between the desperate grinding of a sweaty and inebriated evening, or the eager jumping of a concert, and the dancing that Janelle Monáe caused us to partake in. People grooved on their own, people paired up and grooved together, and movements reminiscent of swing and the Charleston could be seen throughout the crowd. The atmosphere was one of an overwhelming need to dance; an infectious requirement that spread from the stage and imbued Monáe’s spectators with rhythm. A classmate I had only spoken to on a few occasions came up to me and gleefully joined in on my boogieing. A complete stranger approached my friend and asked her to slow dance.
The sun set behind Memorial Church, and as it grew darker, the colored lights that glowed from the stage to illuminate the dancers in blue and yellow cast long shadows behind them into the trees of Tercentary Theatre. “I really, really want to thank you/for dancing to the end” Monáe sang, as we did just that; but it is her who deserves thanks for casting a spell for a little while, and for making us dance like we rarely do.