When in Prague, do everything. 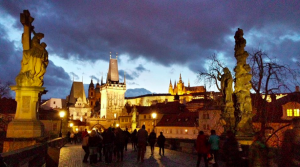 Spring break, for college students, is usually synonymous with Cancun, Punta Cana, Panama City Beach, and the like. Although I am sure those regions rightfully deserve their spots for the most coveted destinations, I gave up spending days at the beach to visit Prague. Rest assured, there were no regrets.

In the past few decades, after the fall of the Iron Curtain, Prague has, rightfully so, become one of the most popular cities in Europe. Its streets and architecture were scarcely touched by the last three centuries, but the people making up the beautiful city have successful adapted to the time. The liberal atmosphere blended with the Romanesque and Gothic architecture makes for the perfect mix. The facts that Prague has a very active night scene and exceptionally cheap prices for most goods are also not bad additions for college students looking to unwind from midterms. 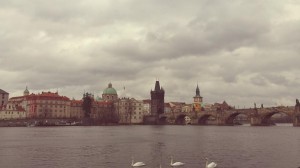 Favorite places:
Visiting the Prague astronomical tower is an absolute must. The clock on the tower was installed in 1410, which makes it the third oldest in the world and the oldest still working one. If you haven’t been to France, the Petrin tower is also a must, a beautiful Eifel-like steel framework that provides panoramic views of Prague. The Charles Bridge, unlike the Charles River, was a sight of unfrozen beauty by mid-March. 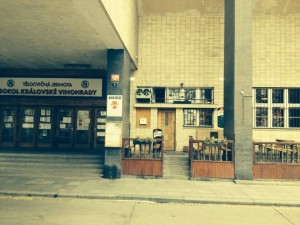 Favorite restaurants and bars:
Czech food is heavy on meat and potatoes. And I say this in the best way possible. Cheap but super filling meals are available at almost every restaurant. The two best restaurants, both predominantly filled with locals, are Sokool and Usadu. Sokool, a restaurant and pub, is situated literally inside of an elementary school — only in Prague would that happen. Aside from awesome décor, Sokool has some of the best friend cheese and cabbage soup around. The entire meal is guaranteed to be super filling and under 10 dollars. Usadu will unquestionably be the place where you had one of the best servings of ribs and meat; the food, people, service, and decorations are unbeatable.

A requirement:
Although I come from a Jewish family, I feel that everyone should visit Terezin and the museum that contains the drawings children made while held at concentration camps. Terezin was a ghetto and concentration camp where more than 150,000 Jews were sent. It was not an extermination camp like Treblinka, but it was a site where more than 33,000 died. It was as close as I got to a concentration camp, and all the stories and movies I had been devastated to read and watch as a child have suddenly taken on overwhelming realness. My body shook as I looked at the drawings made by children ages 5-11. These kids were not like others. They were forced to lose their innocence at ages when I was barely starting out kindergarten. Their drawings showed that, and it was overwhelming. I saw with my own eyes the tiny cells in which hundreds of people were cramped. There were little stars under most of the children’s drawings indicating that they died at the concentration camp. I felt extremely sad for going, but I knew I had something all those people did not — the option to leave. I could escape to my safe home; they could not. Considering that there are people today who, despite overwhelming first-hand evidence, do not believe the Holocaust occurred or think that the stories of torture were exaggerated, everyone has an obligation to visit the town of Terrezin and the concentration camp it has hidden within its center.

Albert Murzakhanov ’16 (amurzakhano@college) hopes to Czech in on the city a few more times.